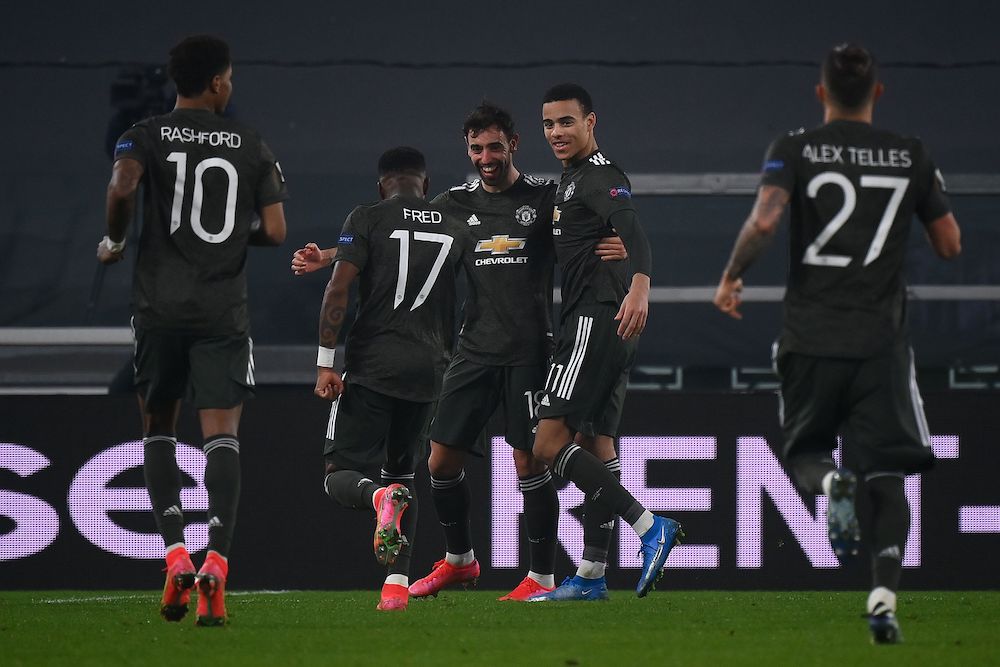 Manchester United put the tie to bed at the halfway stage of this Europa League last 32 contest with a stunning showing against Real Sociedad of La Liga.
Bruno Fernandes scored twice as Marcus Rashford and Dan James also got in on the act to put United out of sight ahead and render next week's return at Old Trafford a glorified training match.

Sociedad are a very good side so to beat them 4-0 - in truth it could and should have been more - is a very good result and allows Ole Gunnar Solskjaer to rest the entire first team for the second game at Old Trafford, coming as it does three days before our trip to Stamford Bridge.

Here, we look at every player to feature in Turin.

Had very little to do bar one early save with his evening restricted to strong aerial handling and impressive distribution. Played a part in the third goal as he started the counter attack and exuded confidence and authority. What he had to do, he did well. This was Henderson's second European start after the nightmare of Istanbul as he helped to secure a clean sheet. Henderson will start in the second game at Old Trafford.

Perhaps could have been rested and almost certainly will be for the second leg. Booked early on but recovered well for a solid evening, getting forward to support the attack and played a part in the fourth goal with a good run from right-back. Nothing special but did his job effectively in a good team performance

It looked like it would be a busy night for the skipper in the first five minutes, but improved after a few shaky moments and made a critical lunging block at 1-0. Predictably beaten in a foot race against quick forwards but was solid and authoritative, and made two great clearances under pressure. Looked better and far more assured alongside Eric Bailly

A calamitous and chaotic opening spell where he fell over and then got skinned twice. But, to his credit, the Ivorian recovered well and made some good recovery tackles. Claimed an assist for the fourth goal on his return to the side and gained in confidence and stature as the tie wore on. Should have done enough to keep his place for Newcastle on Sunday.

Did well on his last outing against West Ham and was superb again here. Shackled ex-Red Adnan Januzaj expertly and was superb both in defence and attack. Telles was unconvincing in his early days at United but has really improved and this was probably his best showing in Red. Picked up a knock but played the full 90 and has proved a very capable understudy for Luke Shaw.

Another totemic performance that illustrated his growing importance. Given licence to bomb forward and did so to excellent effect. Should have scored and was unlucky not to do so in a supreme box-to-box showing. Efficient in everything he did and drove the team forward from deep. A doubt coming into the game, he was replaced on the hour mark to keep him fresh ahead of Newcastle's visit to Old Trafford on Sunday. Undroppable at the moment. 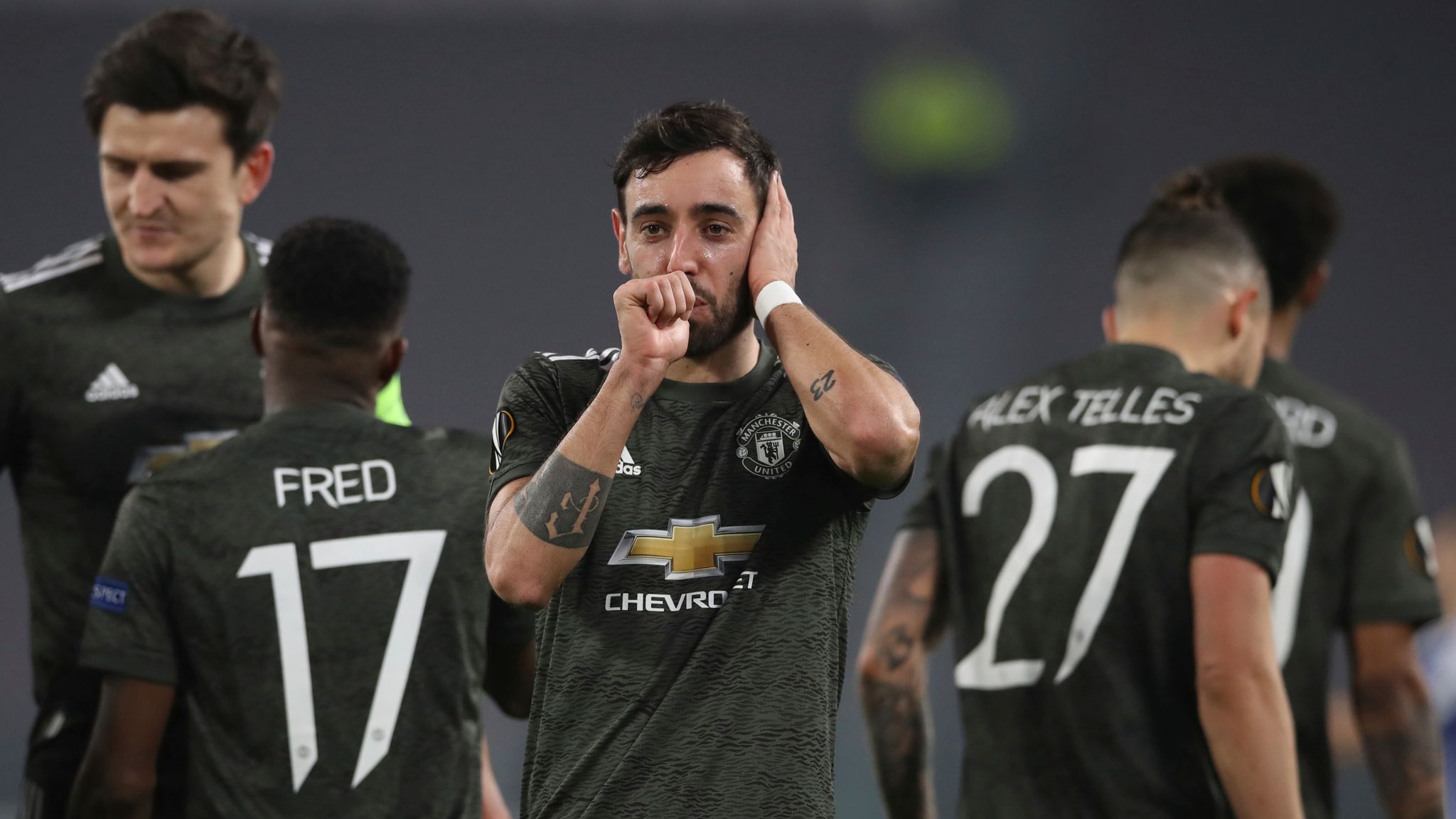 Tidy as always in possession but added an attacking threat to his game and his lovely defence-splitting pass for Marcus Rashford epitomised a brilliant individual performance. Diligent and hard-working, Fred provided balance and his defensive nous allowed McTominay to drive forward whilst the little Brazilian sat and marshalled superbly. Like a traffic warden, Fred has become Solskjaer's go to man in games like this one and, on this showing, it's easy to see why. I thought Fred was poor at West Brom but bounced back here.

A somewhat surprise inclusion in Solskjaer's team and drifted in and out of the tie. James scored against Southampton last time out and looked dangerous on the counter-attack, particularly in the second half as a tiring Sociedad side left space. Had a goal disallowed and was twice denied by Alex Remiro before he capped a good individual performance with a goal late on, an excellent finish on the angle having burst clear. Has had some criticism but certainly will have silenced some of those here.

Where on earth would Manchester United be without this man - surely the best no.10 on the planet and the talismanic, inspirational, string pulling heartbeat of Solskjaer's United. Put United ahead with a finish more difficult than it looked and then showed the predatory instincts of a striker for his and our second - his 21st goal of a magnificent season. Quite simply a world class talent at the peak of his powers. Sociedad couldn't get near him and he gave a footballing lesson. The best player on the pitch by a considerable distance. When the end of the season awards come around, this man won't be far away. What a player and what a signing. Should watch the second leg from the comfort of home as he won't be needed. Magnificent.

Profligate in the first half and missed two sitters before he finally got his goal. The wrong man in the right place as he wasted three gilt-edged openings, but made good runs, linked the play well and had a key role in both Fernandes goals. Good movement and caused problems for the Spaniards despite his erratic night in front of goal. A mixed performance from him.

Despite the fact he didn't score, Greenwood certainly deserved to get a goal and continued his recent upturn in form. Deployed in his favourite position up top, Greenwood did his bit defensively to snuff out an opening for Monreal and even headed clear several dangerous crosses before half-time. Looked to have assisted James only for the offside flag to decide otherwise. An excellent performance of maturity and patience, he was unlucky not to score himself as he was twice denied by Remiro. He may not be banging them in, but Mason has been a man in fine fettle of late and looks to have recovered from his blip earlier in the season. He was unfortunate to be dropped to the bench at the Hawthorns and there were signs he's getting back to somewhere near his best level.

Allowed McTominay a breather and was relatively untroubled as he kept us ticking over. Made an important clearance soon after coming on and used his experience to snuff out danger on a couple of occasions. Nothing spectacular and was solid.

Came on for the rested Rashford and would have fancied getting himself a goal but it didn't quite happen for him. Had a few nice touches but was unable to replicate the brilliance of his attacking colleagues.

Made his first appearance since the FA Cup game against Watford ages ago. Replaced Fernandes as Solskjaer gave some of his fringe players some valuable minutes. Fernandes won't be needed for the second leg so Mata can look forward to a rare start at Old Trafford.

Didn't get long to impose himself but made a couple of darting runs and could have grabbed a debut goal had James cut the ball back instead of going for goal. Did well and - given the fact the tie is over as a contest - should get his first start in the second leg.

I liked what he did with his team selection here - a side strong enough to win the game and respect good opposition but he rested some key men with the league in mind. It was pleasing that we kept attacking and didn't simply sit on the 2-0 to see the game out. Got everything right and oversaw an excellent result and performance. I want to see everyone rested at Old Trafford.

Posted by United Faithful at 15:56