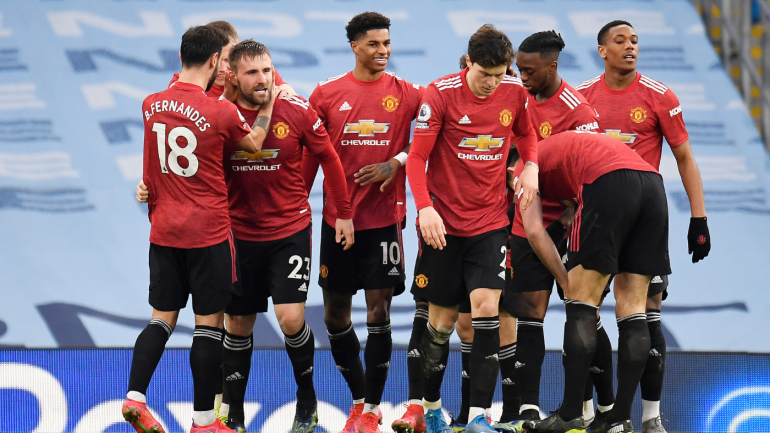 United painted Manchester a glorious shade of magnificent red as Ole Gunnar Solskjaer's side turned the form book on its head to stop City in their tracks and end their 21-match winning run.
After three successive goalless draws, including a dire stalemate at Palace, United had come in for criticism but dispelled those doubters in spectacular style with a derby day showing for the ages as Solskjaer earned a fourth victory over his illustrious opposite number Pep Guardiola.

Here, we take a look at how each Red rated as United defied the odds again to secure a famous victory in the 185th all-Manchester meeting

Given his big chance with David de Gea on maternity leave, Henderson was commanding, vocal and made one excellent save in particular to deny Ilkay Gundogan. He may have expected to find himself a man under siege, but, curiously, had hardly anything to do in the face of United's all-conquering neighbours. He didn't quite register an assist but Shaw's goal came from his throw - out, something you feel De Gea just wouldn't do. Henderson did his prospects of becoming number one no harm at all.

Seems to save his best form for the visit to the Etihad and the challenge of Raheem Sterling. The latter seems to have a mental block when it comes to getting the better of the Spider. Wan - Bissaka barely gave his rival a sniff all game, winning every challenge, making numerous important interceptions and had his side of the pitch in his own form of lockdown. Immense.

Dominant in the air against one of the best attacks in Europe, strong, brave in commanding and leading a high line. Produced a number of hugely important clearances and, bar a booking, barely put a foot wrong. This was a captain's performance from a man having a quietly impressive season. His yellow card was clumsy and the only reason why he hasn't got a perfect score here. Colossal.

Lindelof was the main selection question from Solskjaer, as many of us felt Eric Bailly should have been picked alongside Maguire. But the Swede more than justified his inclusion with an impressive performance. Solskjaer likes Lindelof's composure and passing ability from deep and he certainly showed here that he is a man for the big occasion. Read City's attacks brilliantly, got stuck in, and limited a world class attack to barely anything of note. Courageous and confident on the ball, he had a brilliant game and tends to save his best performances for the elite.

A superb goal capped another absolutely magnificent performance from a player in the midst of a world class season. A constant menace down the left, he was excellent both in defence and attack and never stopped running. The goal will be the highlight of his career and won the battle with Riyad Mahrez at a canter. This tie was deemed as a duel between Shaw and City counterpart Joao Cancelo, but there was only one winner. What a player and what a performance from the best left-back in the country by a distance right now. An England recall surely beckons.

Nothing flashy but did his job well, excelling at the nitty gritty and frustrating City. He was loose in possession early on but got better and was tireless in closing down space and trying to break up play. He got forward well, linked the play and proved a nuisance for the hosts as he buzzed around in midfield to disrupt City's pretty passing patterns. Crucial in games like this one.

Pressed superbly as the little Brazilian played with his trademark energy and industry. A little sloppy at times but grew into the game and cut off the passing lanes for De Bruyne and Ilkay Gundogan. Didn't do too much with the ball but his work off it was invaluable. Hassled and harried with guts and tenacity.

James drifted in and out of the game but his work rate and running off the ball laid the platform for United's counter-attacking masterclass. He provided excellent support for Wan - Bissaka and tracked back tirelessly to help his right-back shackle Sterling. He looked to push Zinchenko wide and free up space for Fernandes and Rashford between the full-back and centre-backs. James has been in good form recently and did well here as he gave us an outlet. His raw pace gave City problems. 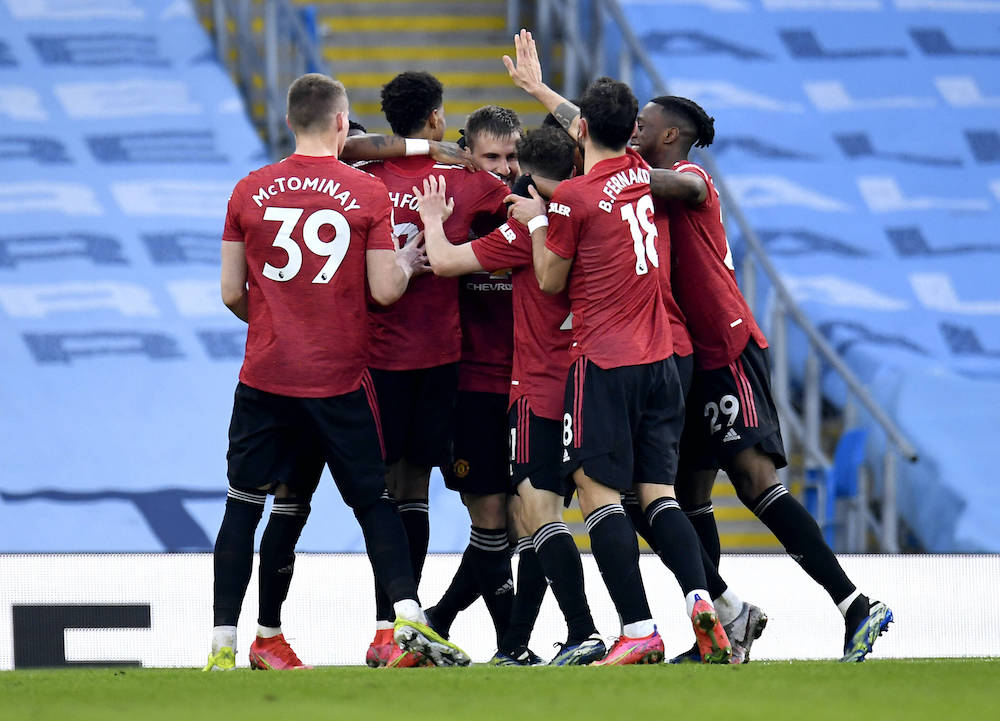 Putting his hands to his ears, Fernandes was very much aware of the questions surrounding his efficiency against the top sides. He put United ahead with an early penalty, pressed excellently and recovered the ball eight times in the first half with his work rate and energy. He proved he can deliver when it matters, dispatching the spot-kick and providing a platform for United to build from.

Rashford has come in for criticism of late but will have silenced them here with an excellent performance, his best showing for ages. Nearly scored early on and, on another day, could have had a hat-trick. Dovetailed superbly with Shaw down the left and led the charge on the counter, getting an assist for Shaw when he teed up the crucial second goal. Clearly struggling with injury at times, and had to go off with an ankle problem after tireless work off the ball. Played a part in the opening goal too and Solskjaer will hope his injury is nothing too serious.

Recalled to the starting line-up with Edinson Cavani injured, Martial gets my vote for man of the match. Ran Ruben Dias and John Stones ragged, he held the ball up, worked the channels magnificently, led the charge on the counter and linked the play brilliantly. City couldn't get near him at times, typified when Rodri and Stones clattered against him as he spun and raced away - the mercurial Frenchman at his explosive and dynamic best. Should have scored with a good chance to make it 3-0 but a goal was the only thing missing from an otherwise nearly faultless performance from Martial. He was absolutely magnificent and terrorised City in a way no one has done for ages. He needed a big performance and had one here.

What a player to put on when the opposition are chasing the game and leaving gaps in behind them. Greenwood did his bit, and ran the channels with energy when United countered. He wasn't able to make the most of the space he had, but he worked hard and linked well with James on the left.

Brought on to sit in midfield and see things out. No rating

Solskjaer caught City and Guardiola by surprise with a high press from the very first minute, instructing the side to ruin the hosts passing game with a high energy counter attacking performance. By the end, United were doing more than that - actually dominating the game and forcing City to the fringes. It worked impressively well as he took his record against Guardiola to four wins, one draw and three defeats.

Posted by United Faithful at 16:03