Tony Martial, he came from France..

Wantaway United striker Anthony Martial has completed a loan move to La Liga high flyers Sevilla until the end of the season.
The mercurial Frenchman has featured just once since interim Reds boss Ralf Rangnick took charge in December, with Martial's game time limited to eleven minutes at the end of Saturday's victory over West Ham.

Martial had reportedly refused to be included in the squad for the trip to Villa eleven days ago (denied by the player), and his languid - often lazy - style seems one at odds with Rangnick's vision for a high octane, high energy United side.

On the back of reverse fixture with the Midlands side, Ole Gunnar Solskjaer dropped Cristiano Ronaldo for the visit of Everton and picked Martial in his stead. Despite his record of only two goals in 24 games, doubts were eviscerated when he scored United's only goal shortly before half-time with a superbly taken opener. "Tony Martial scores again" emanated from the Stretford End, but that was his last league start and it could be the last time he hears himself serenaded at Old Trafford.

There is no option to buy and no loan fee, but Sevilla will cover the striker's wages. It remains likely he will return to Old Trafford in the summer as one of a number of United fringe players with an uncertain future. A fresh start for both the player and the club looks to be the best outcome for all parties.

Martial was the most expensive teenager in world football (eclipsing our own record fee for Luke Shaw) when he was plucked from relative obscurity as an emerging talent from AS Monaco in 2015.
His £48m signing raised eyebrows for a player no one outside of France had heard of, but Martial would quickly dispel the doubters with a stunning debut as he stepped off the bench to score THAT memorable solo goal against the Scousers, going on to notch 17 goals in his first season, a laudable effort and no mean feat in a team lacking flair and creativity under Louis van Gaal. In an otherwise torrid, tepid and instantly forgettable campaign, Martial was the single ray of light.

So how will Martial's six and a half campaigns in the Red of United be remembered? Well, of course firstly, as already mentioned, this is only a loan deal so we will see back at Old Trafford in the not too distant future.
But you would probably rank him somewhere between a roaring success and a total flop. The Frenchman has struggled to live up to the hype but, whilst there have been some magic moments from a player who certainly 'has it' in his locker, you also feel a sense of what might have been.

In mitigation, Martial's United career has co-incided with turbulent times at Old Trafford. Four different managers have come and gone - not of all of whom have been his biggest fan. Jose Mourinho notoriously fell out with the temperamental Frenchman, but he's certainly not alone there. He's never truly nailed down one single position, moonlight on both the right and the left as well as his favourite role through the middle as the no.9.
Marcus Rashford and Mason Greenwood have both risen through the ranks during his time at United and the return of Ronaldo certainly hasn't helped his cause, but for a player with such undoubted ability, he's never quite been able to shake off the stigma of a player operating at half pace. 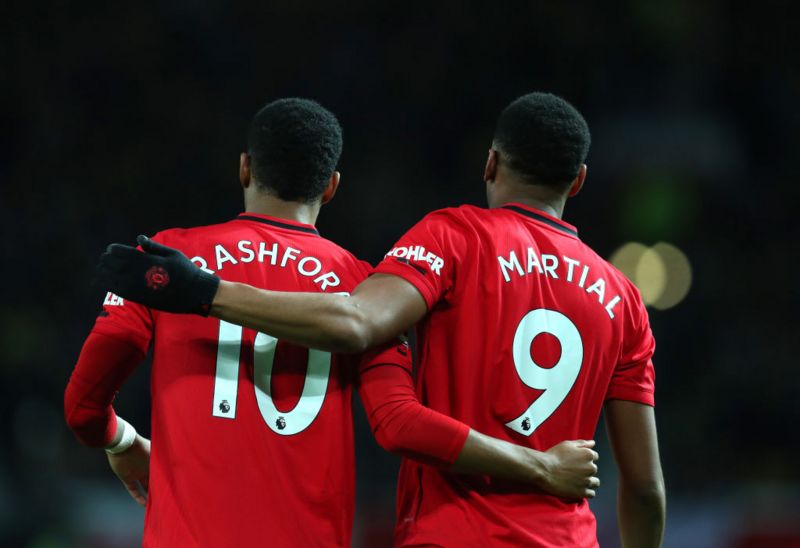 Martial was responsible for one of my favourite days supporting this great club, with his late, late FA Cup semi final winner against Everton at Wembley. I was there that day, in the crowd behind the very same goal Martial steered the ball into having latched on to Ander Herrera's toe poke and fired beyond Joel Robles in the final seconds. Que bedlam. Carried down Wembley Way arm in arm with fellow Reds (and slightly the worse for wear), Martial's terrace chant paid homage to a player we had taken to our hearts.

The best form of his Reds career came as football resumed after the first Covid lockdown, when Martial channelled his inner Pele, dovetailing majestically with Marcus Rashford and Mason Greenwood to spark our unlikely surge into third place. The net result? His best season in front of goal - 23 - with only one of those from the spot, to end 2019/20 at the top of our scoring charts. Without fans to get on his back, Martial thrived in the sterile environment of behind-closed-doors football but has been in regression ever since. He's become increasingly disillusioned with life in M16 and a parting of the ways has seemed inevitable for a while now.

This might not be the end of the Martial story at United, merely the closing of an old chapter. All of us here at United Faithful wish our no.9 the very best of luck in Spain.