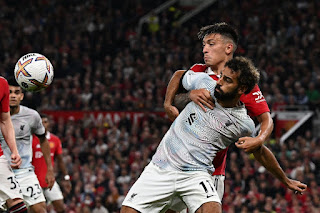 Manchester United's season roared into life with an improbable victory over Jurgen Klopp's Liverpool at a raucous Old Trafford.

It was a result no-one saw coming on a night which could prove seminal, despite being only three games into the new Premier League season. Jadon Sancho and Marcus Rashford put United 2-0 ahead and despite a late Mo Salah goal to set up a nervous finale, there can be little argument over the result.

Here is how each Red rated on a memorable night at Old Trafford.

Could have sat in with the fans for the first hour but made good saves from Fabinho and Roberto Firmino after half-time. Nothing he could have done to prevent Salah scoring. Good hands and a good command of his area were notable assets to his game.

Tenacious, brave and not far from faultless in his duel with Luis Diaz. Dalot limited the Colombian's attacking output and showed a willingness to get forward. Did well defensively too and showed maturity to keep his head whilst on a booking.

Simply colossal at the back. Perverse he was left out in the first two games when he is United's best centre back by a distance. Won everything in the air and into feet, he was strong, vocal and organised a young defence imperiously. A Rolls Royce of a player. Magnificent.

Has had his critics but silenced them superbly in a brilliant, no nonsense showing from minute one to 90. Let Salah know he was there with a crunching challenge after 30 seconds and never let up. Saved a certain own goal, won every duel and turned in probably the best defensive display you will see all season. He has arrived in the Premier League. Sensational.

What a game for the young full-back to be thrown into for his full debut, but he did not disappoint. Tough and brave in the tackle, quick, strong, and pocketed Salah throughout. United's only bright spot in the debacle at Brentford and even showed he can take a set piece. Luke Shaw isn't getting his place back any time soon on this evidence. Brilliant.

In front of the watching Casemiro, the Scot was by no means unerring but put in a vastly improved performance. Played a defence-splitting through ball to tee up Fernandes in the move from which Elanga struck the post. Helped United to get hold of the midfield although he was a little loose in possession at times and seemed to tire late on.

Good again. Calm and composed on the ball as always, nearly scored from a set piece and set the tone with his energy and driving runs. Played a part in the opening goal when he found Elanga to set up Sancho and had worked tirelessly when he was taken off late on.

His best performance at United so far? Sancho popped up everywhere in the United attack, he was brimming with menace and held Liverpool at his sway. A wonderful opener sent the Reds on their way  and Liverpool's uncharacteristically shaky back line couldn't deal with him. Got to keep this level up now.

Linked the play well and unlucky not to score himself. Regressed slightly but his best performance for ages. The Portuguese playmaker was United's midfield metronome and did everything right in the first half. Almost scored an unfortunate own goal and picked up a poor booking for diving but a real captain's performance and showed leadership to help United see the game through.

Unlucky to be subbed at half time as he hit the post when he perhaps should have scored, and set up Sancho for the opener. Gave Alexander - Arnold problems in the first half and played his part with good energy and industry in United's impressive showing.

This was Rashford at his brilliant best in a vintage performance for the ages. Barged Alexander - Arnold out the way early on, ran in behind tirelessly and looked fit and firing from start to finish. Led the line impressively and capped off an effervescent performance with a superbly taken goal. This was Rashford's best performance in a long, long time. A late mazy run in the second half showed the level of confidence and morale is the highest it has been for a while.

The mercurial Frenchman's link up play with Rashford and Sancho caught the eye in pre-season and it was in evidence again here. Held the ball up superbly, put a shift in and set up Rashford for the game clinching second goal. Martial did brilliantly when he came on and his return gives United, and ten Hag, options up top.

Brought on to shore up the midfield but Liverpool got a foothold in the game. Erred in his passing although did provide tenacity. It looks as though the Brazilian will suffer in terms of game time when his compatriot Casemiro gets up to speed.

Came on late and skied a volley. A big call dropping him to the bench but it worked. Had no impact and is his role now as an impact sub?

Helped run the clock down and could have had an assist for Martial but failed to make an impact in his few minutes on the field.

First minutes of the season as ten Hag put the right-back on to offer late solidity and reliability down the right.

This is what he was appointed for. Showed bravery in his team selection which paid off and got everything right. On a night when his United tenure truly had lift off, the Dutchman will be delighted with his team.