In the wake of United's last-gasp 3-2 defeat to league leaders Arsenal, Manchester United's 88m man Antony has come in for a fair chunk of criticism.
We love criticising players in this country, people expect everything yesterday and have astronomically high standards no one could ever hope to reach. It appears Antony is no exception to that unwritten rule. 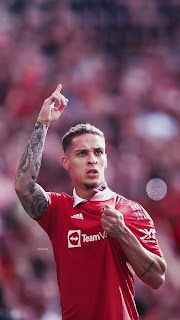 Being a Brazilian winger, there is a natural assumption for flair, flamboyance and an ingrained ability to leave defenders with 'twisted blood'. Coming from the country which made the Beautiful Game exactly that, eye-catching swash and buckle is expected to be part of your DNA. Brazilian footballers are revered for their swagger, style and skill.

But in Antony, Manchester United have a very different brand of winger. Brazilian-born but European in style, the former Ajax man scored three goals in his first three league games in the Red of United, becoming the first player ever to do so. A debut goal against the Gunners was followed up with strikes against Everton and a derby day screamer in the 6-3 demolition at the hands of City.
A spell out with injury before the World Cup followed and Antony has added to his goal tally since the restart with a stunner in the win over Charlton and the opener in the next game, the FA Cup win against Everton.

Five goals in 19 appearances (two as sub) hints at a good return for a winger not known for his goalscoring prowess having scored 25 in 82 games under Erik ten Hag at the Eredivisie giants (11 in 2020-21, 12 the following season and two in the early part of this term before his move to Manchester.

Antony is, in essence, what we might call a defensive winger: fans expecting him to surge past opponents in the style of a 'flying winger' and beat several men, the likes of which you would see about 15 years ago, simply don't understand his game. He is yet to register an assist or create a so called 'big chance' but he's not that sort of player, nor has he ever been nor ever will be. That's not his role in this team: it's not what we bought him for and there needs to be an understanding and a knowledge of exactly what his job is in ten Hag's United team. He is team focused and plays the game on substance rather than style. Think Willian, a younger version of James Milner, Dejan Kulusevski and Brighton's Pascal Gross. You can even put Bukayo Saka in that bracket too. These players are known for their defensive guile and in favouring a team environment ahead of flashy individual work.

Antony has been playing superbly down United's right but he cannot do the job people expect him to do. There are flashes of flair and trickery such as his spin the Europa game against Sheriff when he was hauled off immediately afterwards but panache of that nature has been few and far between.

In the Twittersphere, a narrative already seems to have been written. A narrative suggesting he is a flop because he doesn't beat his man and because he likes to cut in and use his left foot. His supposed 'lack' of contribution has become a stick to beat him with even though those of us who watch him every week know exactly what he offers. Most wingers are one footed: Ryan Giggs, Arjen Robben and even perhaps the greatest of them all, Lionel Messi, have become renowned for not having a right foot. 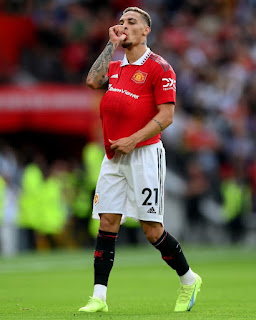 It said everything Oleksandr Zinchenko had the freedom of the Emirates when Antony was subbed off. Until then, the bleach-blonde United man had kept Arsenal's rampaging tour de force, Kevin de Bruyne lookalike quiet and his willingness to recycle the ball in possession was a key component of going toe-to-toe with the leaders (and champions-elect) for so long.

His work rate, his tracking back and his ability to help out either Aaron Wan - Bissaka or Diogo Dalot to press and win the ball back is under-appreciated and why ten Hag likes him so much.

The club's powers that be have admitted they vastly overpaid to land one of ten Hag's main targets in the summer. That has certainly not helped his cause, but it's important to remember he is still young and in his first season at this level. ten Hag is only just halfway through his first season and has yet to implement the full scale of his ideology at Old Trafford.

The golden rule of 'never judge a player in his first season' should take full effect here. Writing Antony off already is simply nonsensical.