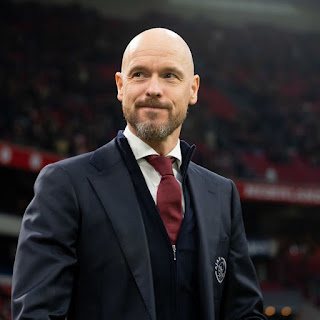 The sight of the diminutive Luke Shaw rising to win a series of headers against the towering figure of Erling Haaland epitomised this Manchester United performance more than anything else.

As City pressed in vain to salvage even a point from a derby they thought they'd won, Shaw, starting ahead of World Cup winner Lisandro Martinez at centre-back, rose like a salmon to cap a colossal performance with one final heroic act of derring-do.
Cheered just as loud as Bruno Fernandes' leveller and Marcus Rashford's winner, Shaw - looking every inch the seasoned central defender - delivered a masterclass up against one of, indeed if not THE, greatest strikers of his and any other generation. At the final whistle, Casemiro sunk to his knees and Raphael Varane fist pumping and whipping up the crowd was a sign of the renewed belief and confidence surging from every inch of these players' pores.
It was growing evidence that everything the erudite and tactically astute disciplinarian ten Hag is doing, every decision he is making, is working exactly as he planned. For this is not luck. Here is a simply magnificent and meticulous master of his managerial craft, a man putting a more and more indelible stamp on Manchester United by the week. He looks more at home, more suited to the task than many of his perhaps more illustrious predecessors have done in recent years.
United have only lost once in 19 games since that derby day humiliation back in October and even then can count themselves unfortunate at Villa Park on a day when we had enough chances, and much of the play, to warrant at least a point.
It certainly gives weight to ten Hag's belief a harrowing experience could be used as a force for good. As the old adage says, more can be learned from defeat than it can from victory and that has been the case this season.

The conclusion to this derby may be riddled in contention, and you can feel a certain sympathy for City's complaints but United's character, belief and unity justified the growing optimism around Old Trafford - a far cry from the dark days of August when we lost at home to Brighton and were then eviscerated at Brentford the following week. Five months on, and even those defeats do not look so bad now given how well both sides are doing with the Seagulls seventh and the Bees eighth.
Arsenal, Tottenham, Liverpool and now perhaps the mightiest of them all have been vanquished here by United this season, but victory over the champions, and the manner of it, is by far the most powerful statement of ten Hag's fledgling United tenure.
The subsequent celebrations at the end of a thrilling and chaotic derby carried the conviction this giant club, our giant club which has lost its way so badly, is beginning to stir again.
Casemiro has been the cement between the stones following his arrival from Real Madrid but so many other factors are coming together now as the Reds now sit only one point behind our vanquished opponents. A state of affairs no one would have believed a few months ago. Even the notion United would be in third place would have seen you laughed out of town.
ten Hag has restored belief, instilled smart game management and has also made it clear who is in charge when Cristiano Ronaldo was hustled out the door sharpish following his insubordination. Even Marcus Rashford has not escaped ten Hag's stance as a firm but fair disciplinarian when he was dropped at Wolves after he was late for a team meeting.
Nearly every United player has improved beyond all recognition under the tutelage of ten Hag, but surely no one more so than Rashford. His winner here means he has now scored in each of his last seven games in all competitions, eight in total, and has hit nine in each of his last matches at Old Trafford - an extraordinary run of red-hot form in front of goal not seen for over two decades. 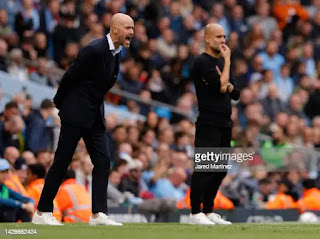 In stark contrast to Rashford's visceral joy, City goal machine Haaland had a rare fruitless day with only 19 touches in 95 minutes, only five of these in the United box as he was forced to the fringes by a magnificent performance from Shaw.
Shaw was drafted in as an emergency centre-back during United's festive fixtures but, in only his fourth outing in that position, looked as though he's played there all his life. His inclusion over Lisandro Martinez raised eyebrows and looked a massive gamble especially considering the presence of Haaland, but it was yet another decision ten Hag got right. Just like he has with everything else.
Such has been Shaw's string of superb showings as a left-sided centre-back, he is now a genuine option for ten Hag.
Of course, any talk of the title is wide of the mark and very much tongue in cheek, no matter how much I've enjoyed the banter on social media.
City are still the benchmark and have dominated not just United but pretty much everyone else for the best part of a decade. We cannot, not yet at least, talk of measuring gaps to them, but what cannot be argued without contradiction is the fact we are, at last, moving in the right direction. Something special is cooking in the corridors of Old Trafford. You can feel it, you can sense it, you can witness it on andoff the pitch and in the stands at United now.
ten Hag still has a lot of work to do after the barren years of underachievement, but to have us in the top three, right on the heels of City and even casting a glance at the leaders Arsenal (who we face next weekend) is testament to his fine body of work only six months into his reign. It is certainly a position we'd have snatched with both hands if offered back in August.
ten Hag's arrival and his measured, considered - perhaps even under-rated - approach was always going to be a case of gradual evolution rather than rapid revolution. But the best way to prove the graph is on an upward trajectory is to send the champions packing, especially when those champions are Manchester City.
Posted by United Faithful at 04:05
Labels: features. opinions