Manchester derby: Five key battles to watch out for

The two-time defending league champions have won the last three matches between the sides by an aggregate score of 12-4 but United are in fine fettle and will be confident of a win.

The two bald managers lock horns on Saturday lunchtime and, with that in mind, here are some of the key derby day battles to look out for. 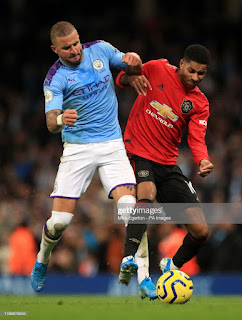 Marcus Rashford is in the form of his life and a terrifying prospect for even the best Premier League defences. Rashford ran the show in the FA Cup win over Everton and struck a late brace having come off the bench in the midweek cup win over Charlton. He is likely to be United's main threat again and one of only two 'local lads' to feature in the derby. Tasked with keeping tabs on him will be Kyle Walker who has been used across the back line in a number of positions to great effect. Whether at full-back or as a makeshift centre-back or in a back three, Walker's experience will be crucial against United, our top scorer with 15 goals.

Casemiro was still only a bit part player when the two sides met back in October. He had only recently arrived from Real Madrid and had yet to be fully integrated into the United side in the 6-3 loss. But now that he has been, he has proved an inspired, transformational player in the team, surely the greatest exponent of his craft anywhere in the country. His revered opposite number Rodri certainly runs him close for that particular roll of honour, with the two men sitting at the top of everyone's list when it comes to the Prem's best CDMs.
Casemiro has formed a solid base alongside Christian Eriksen in United's midfield and has provided the defensive cover our centre-backs have been lacking with Scott McTominay and Fred. In what is sure to be a captivating individual battle, whoever seizes control of midfield is likely to go on and lay the platform for his side's win.

Joao Cancelo has perhaps not been at his usual best since the restart after the World Cup. He had a night to forget at right-back down at Southampton but Guardiola is likely to move him to left back where he helps to dominate the midfield. His attacking output is very impressive with the Portuguese having chipped with two goals and five assists so far, a solid return for a full-back.
He will be in direct competition with Antony, who has impressed in United's last two cup wins but has also attracted criticism in some quarters. His off-the-back work rate and security in possession keeps United's ability to sustain pressure and also allows Diogo Dalot to bomb forward on the overlap (although Aaron Wan - Bissaka will start on Saturday). The form of Cancelo and Antony will make for a fascinating match-up and could go a long way towards deciding the outcome.

The irresistible force meets the immovable object. The league's outstanding centre-forward meets one of the league's best centre backs. Varane limped off 40 minutes into the Etihad debacle in October and City - spearheaded by Haaland's hat-trick - took full advantage. By his own astronomically high standards, Haaland is experiencing something of a goal drought having not scored in his side's last three games. Tasked with extending that 'drought' is Varane, who has shrugged off his World Cup disappointment in superb style. He has been rotated since the restart but United have only conceded one goal in that time and so Varane will be tasked with shackling City's cyborg in this one. Don't be surprised to see Haaland doubled up on by Lisandro Martinez as well. Have United learned their lesson from the last game? Shutting down the 21-goal Haaland does not guarantee success, of course, but would go a long way to helping to do so. Haaland's power and pace versus Varane's positional sense and aerial ability promises a fascinating tete - a - tete. 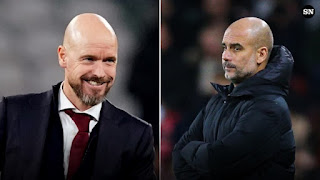 Two very different types of 'CAMs'. Kevin de Bruyne leads the way at the top of the Premier League's assists chart, although that's not all that difficult when you have Erling Haaland up top. Bruno Fernandes may not be anywhere near that this season, but he is United's hardest-working and most important player. The respective talents of the two players always pop up every now and then, especially around derby day and the two are more or less locked together when it comes to the numbers. Fernandes only has three goals this season but has been no less important for Erik ten Hag. Two players who never get injured and play every game when available and two of the league's best no.10s. Both men will again be crucial to deciding their side's destiny when the cream of Manchester's footballing crop clash again at Old Trafford.

Bring on the derby!