Marcus Rashford scored for the fifth game in a row as United increased the pressure on Everton's beleaguered boss Frank Lampard with a deserved FA Cup victory at Old Trafford.

This was a seventh win in a row for Erik ten Hag's side, as the Reds sealed their place in the fourth round of the world's oldest cup competition - one which United's Dutch manager admits he will be aiming to win. 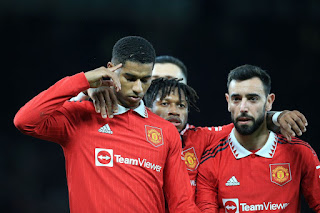 Antony turned home Rashford's cross in the fourth minute before Conor Coady capitalised on a rare David de Gea error to equalise. Coady then scored at the wrong end to restore the Reds lead and - after Dominic Calvert - Lewin had a goal disallowed, Rashford's injury time penalty settled matters.

ten Hag opted not to rest any of his first team; that chance will surely come on Tuesday when we host third tier Charlton in the Carabao Cup. There were four changes from the XI which beat Bournemouth on Tuesday as the returning Diogo Dalot was restored to the side in place of Aaron Wan - Bissaka. Raphael Varane came in for Harry Maguire, Tyrell Malacia replaced Victor Lindelof and Antony recovered from his knock to come in ahead of the stricken Donny van de Beek.

It took United less than five minutes to go ahead when the front three linked up to devastating effect. Anthony Martial fed Rashford and he burst past Seamus Coleman to pick out the onrushing Antony, who slid home a simple finish at the back post.

United almost went 2-0 ahead immediately after more good work from Antony found Martial, but he fired his effort across goal and wide when he perhaps should have done better.

The writing looked on the wall for the struggling Toffees given United have not conceded since the World Cup, but de Gea's baffling error changed all that ten minutes further on. Neal Maupay's trickling, mishit cross somehow bemused the usually dependable de Gea, who seemed to forget he could use his hands as the ball squirmed under him and fell invitingly for Coady to tap in from three yards.

Demarai Gray struck the outside of a post and Jordan Pickford saved well to deny Martial at the other end in an exciting, end to end encounter.
Christian Eriksen flashed narrowly off target and Rashford went close from distance with the tie played in the classic frantic, harum scarum manner associated with the classic English FA Cup match.

United had scored early in the first half and did so again after the resumption. Having collected the ball out wide, Rashford drove into the box and showed lovely footwork to beat his defender and his drilled cross was turned into his own net by the stretching Coady.

Pickford saved superbly from Bruno Fernandes as United looked to put the game to bed but Everton sub Calvert - Lewin, searching for his obligatory goal against the Reds, seemed to have done just that shortly after coming on.

Calvert - Lewin fired in under de Gea after good build up play from Gray, but replays showed the latter was marginally offside and VAR correctly chalked the 'goal' out.

Rashford went close with a trademark free-kick - well saved by Pickford - but Rashford eventually prevailed against his compatriot when substitute Alejandro Garnacho was scythed down by Godfrey. Our no.10 rolled the resultant spot-kick into the corner for his 13th goal of a red-hot season to finally put the game beyond any lingering doubt.

United certainly weren't at their best but got the job done to move into the next round and leave a cloud hanging over Everton manager Lampard. You're getting sacked in the morning?