Valiant Reds fall short but there's plenty to be proud of

Manchester United fell agonisingly short at the Emirates but Erik ten Hag's improving side should leave the capital with plenty to be proud of. 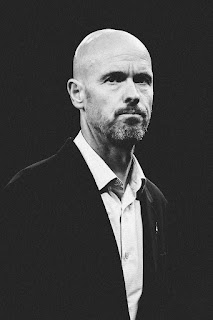 Eddie Nketiah's late, late winner kept Mikel Arteta's Gunners firmly on course for the title but it's important to remember Arsenal are in the third year of their project under the dapper Spanish gaffer.
ten Hag has been at United for six months and had to make do without key midfield maestro Casemiro in one of our biggest games of the season. They are two seasons ahead of us but we still went toe-to-toe with them and only succumbed in the final minute.

A fine side at the very apex of their lofty ambitions against an improving one on those tentative first few steps up the mountain.

All things considered, then, and despite the agony of this late defeat, it was also a measure of how far we've come. Arsenal will feel they deserved their win but the Reds - clad in our white away strip for this fixture - will be encouraged by their fighting spirit and determination. Last season's United side would have been eviscerated by this Arsenal vintage and, indeed, many predicted a similar result this time.

Marcus Rashford's stunning goal briefly raised hopes of a famous victory and a league double over the leaders and champions-elect. Nketiah quickly responded as he headed the hosts' level before Bukayo Saka curled home a stunner early in the second half. Lisandro Martinez stuck his head where most players don't put their feet to equalise with a looping header but lack of bench options and a punishing fixture schedule ultimately told. But there is no doubt this tenacious and improving United side is going in the right direction.

United thought they had done enough to resist the inevitable late twist in the tale as the clock ticked down and our defence - with centre-backs Raphael Varane and Licha magnificent - held firm. It would be a stretch to say this was an onslaught, as David de Gea only made one save, in the 86th minute, but in the end, Arsenal's relentless pressing and insatiable energy finally wore us down. That always seemed inevitable seeing as the Gunners had a week off and this was our third game in eight days.

Arsenal just ran that bit further; just had that little bit more in the tank they needed. That in itself is an illustration of they are two years ahead of ten Hag's United, but the erudite Dutchman will know we need to get to these levels. Arteta has done so, and thus ten Hag must be given the same lifespan to replicate the Spaniard's impressive work in north London. He has made a very strong start and has certainly got us charting a course for a successful season. This result may have ended any faint, lingering talk of a title challenge but we are in the top four and still in contention for all three knockout cup competitions. Considering no one gave us a chance before a ball was kicked, that is a very upward and tangible trajectory.

So it was no wonder there was utter devastation when the brief hope offered by a VAR check on Nketiah's winner, first against Oleksandr Zinchenko and then the goalscorer, was extinguished and we simply did not have time to salvage a point.

United will look back on the costly absence of the experienced Casemiro, whose composure and game management would have proved vital in the frantic final stages. Giant striker Wout Weghorst acquitted himself well but is still adjusting to life in the Premier League.

There was still plenty to admire in our team, who gave as good as we got for the first hour and fought back well after Saka had put Arteta's side in front.

This was a breathtaking, thrill-a-minute Premier League game. Games such as this one are often cagey and chess on grass, but here were the country's two most in-form sides engaged in an almighty ding dong going at it hammer and tong for 94 compelling and captivating minutes.

It was a throwback to the halcyon days of yesteryear when these two giants of English football were engaged in a long and gruelling struggle for supremacy. A match that went to the limits, right up to the last seconds and even centimetres, could also be the one that proves Arsenal really can go all the way more than ever.
United were such creditable parties to a vintage match that more than revitalised an all-time classic fixture, evoking memories of a time when this game used to bring the globe to a standstill. It hinted the Premier League's tectonic plates may be starting to rumble again. After Liverpool and Chelsea revived the energy of those trepidatious stalemates which were once the norm under Messrs Benitez and Mourinho in the mid-2000s, Arsenal and United rekindling the nostalgic vibes which have kept this storied rivalry simmering since the turn of the millennium made for a refreshing and perhaps unexpected change.

Two giants have simultaneously awoken from their slumber with renewed panache, vigour and focus - the rebuilds at the Emirates and, indeed, at United, are ongoing and exemplary. There may not have been Sir Alex Ferguson, Arsene Wenger, Roy Keane, Patrick Vieira, Martin Keown, Ruud van Nistelrooy or projectile pizza slices, but this was as close to those heady days as there has been since both of these heavyweights slipped from their pedestals.

Rashford and the magnificent Martinez were again United's most impressive players. Luke Shaw, imperious of late, struggled against the pace and trickery of the outstanding Saka but is certainly not alone there. Aaron Wan - Bissaka was good again but Scott McTominay, deputising for the big shoes of Casemiro struggled whilst the game bypassed the quiet Christian Eriksen. United were also missing the Spaniard in September's win at Old Trafford - the Gunners' only league loss so far - but Arteta's side were without the services of the influential Thomas Partey. Questions remain over the suitability or otherwise of relative veteran David de Gea who, whilst he cannot be blamed for any of the three goals, put us under pressure with his suspect handling and questionable kicking. His ham-fisted punch under no pressure in the 81st minute, when it seemed easier to simply hold the ball and get United up the pitch, came to epitomise a curious performance from the keeper.

On the other flank, Oleksandr Zinchenko was without peers. Not only did he limit £88m man Antony to fleeting glimpses of his undoubted talent, but he - perhaps more than anyone, helped Arsenal to exert the pressure. His ability to play as an inverted full-back, breaking into midfield to overload the opposition and resist the press with his passing is a key element to this Arsenal side's renaissance.

Antony is good defensively and helps to retain possession, but he is understandably posing more questions than answers. He wasn't as bad as has been made out here, but you do expect a bit more from someone so expensive, even if that someone is still young and in his debut season at this level. United's defensive structure and durability certainly looked more vulnerable when the Brazilian winger was taken off.

Losing to the champions-elect in the very last minute, a side which has only failed to win once in the league at home all season is certainly nothing to be ashamed of. There is absolutely no disgrace here at all.