Manchester United are set to complete the signing of Burnley's on-loan Besiktas striker Wout Weghorst  on a short-term deal until the end of the season. 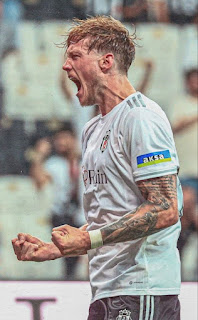 The Dutch international will link up with his compatriot Erik ten Hag at Old Trafford and all eyes now turn to whether he will be registered in time to feature in Saturday's Manchester derby.

Weghorst is flying to England on Thursday where the paperwork and his medical will be completed. He must be registered by 12pm on Friday to be in the squad for the visit of Pep Guardiola's men on Saturday lunchtime. There is no option to buy as part of the deal - it will be a straight loan until the summer.
Weghorst scored twice in the last ten minute of his side's World Cup quarter-final with eventual winners Argentina, as Oranje recovered from two down only to eventually succumb on penalties.

Cristiano Ronaldo's acrimonious departure after his now infamously unsanctioned interview has left ten Hag with only the in-form Marcus Rashford and injury-prone Anthony Martial - neither of whom are genuine, out-and-out strikers - as his only options at no.9. If United are to maintain this winning form and go deep into as many competitions as possible, another striker was a must.

It's true Weghorst is not Erling Haaland 2.0, far from it, but the 30-year-old is the best option from what was available and fits the needs of the squad to a 'T.' United desperately needed another striker and a player very different from our current options. At 6ft 6, Weghorst brings a strong, tall, physical presence to the attack and will be a decent option off the bench too if needed. His arrival allows United to end the over-reliance on Martial, and also allows us to mix our game up too. If we need a Plan B, we can get crosses into the box for Weghorst to get on the end of. He set up Jay Rodriguez to score for Burnley at Turf Moor against us and, although he was unable to help them stave off the drop, Weghorst caught the eye during his brief stint in east Lancashire and has scored eight goals in 16 appearances for Turkish club Besiktas in the Super Lig.

We need a rotation option and although he's not someone I would have pinpointed to come in and help us, if ten Hag wants him then that will do me. Dutch strikers have a good record at United and we won the league the last time we had one. He's not a big name but who were we going to get with a very limited budget in the short term? It's clear United will try to sign a longer-term centre-forward in the summer with Harry Kane and Napoli striker Victor Osimhen among the names mentioned.

Beyond merely his goalscoring record, Weghorst is, as you'd expect for a man of 6ft 6, good in the air with effective hold up work. A goal poacher but also a striker willing to drop back and link the play, he averaged more presses per 90 minutes than anyone else during his time in the Premier League. In short, he's a nuisance for opposition defences and has all the assets needed to be a success at Old Trafford.

The board were never going to go and spend £60m+ on a striker with the current financial constraints and the ongoing process of a sale. We always had to get someone cheap and I will back big Wout 100%. People just think of the biggest names all the time but let's give this lad a chance and, like I said, if it's what the manager wants then I'm all for it.

Weghorst began his career in Dutch lower league football before being spotted and signed by Drenthe-based club Emmen. There, he plundered an impressive 20 goals in 62 appearances before moving on to Heracles Almelo and then AZ. It was with the Alkmaar-based club where Weghorst's career really blossomed, as he scored 20 goals in 29 appearances during his debut season to finish a joint third top scorer and earn a maiden call up for Ronald Koeman's Dutch squad.

Wout Weghorst at Wolfsburg has a nice alliterative feel to it and the move duly transpired when he joined the Bundesliga club ahead of the 2018-19 season, going on to net a hat-trick of hat-tricks before another 16 goals the following season to fire the side into the Europa League.

With Burnley staring relegation in the face, Sean Dyche turned to Weghorst as the man to lead his Clarets out of trouble as he made his first foray into the Premier League for a fee of £12m. 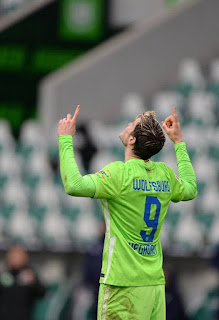 As we now know, Dyche's rare dip into the transfer market did not pay off and Weghorst moved on loan to Besiktas where he has impressed in front of goal.
United have a mixed record when it comes to ageing, veteran, short terms strikers. For every Zlatan Ibrahimovic and Henrik Larsson, we have had Odion Ighalo and Edinson Cavani. In fairness, 17 goals in 39 games for Cavani during his first season at Old Trafford wasn't too bad a return but persistent fitness and availability issues meant the Uruguyuan barely featured during his second term at United with only two goals in 20 games.