MANCHESTER UNITED welcome League Two Cambridge- and their 6,000 travelling fans- to Old Trafford for this FA Cup fourth round replay.

In a rare midweek outing under the Old Trafford floodlights, United manager Louis van Gaal is expected to name a strong side for the cup tie as we look to progress into round five.

Michael Carrick is the only injury absentee but Adnan Januzaj is expected to keep his place after an impressive showing against Leicester and in the original tie 11 days ago.

A tricky Premier League trip to West Ham on Sunday may force van Gaal to rotate his squad once again, but a number of his key players are expected to be involved on Tuesday.

Wayne Rooney, who was rested for the stalemate at the Abbey Stadium, could start in attack as van Gaal considers resting Radamel Falcao and Robin van Persie, while James Wilson, Paddy McNair and Ander Herrera are all likely to start.

Speaking on Monday, Spanish playmaker Juan Mata again re-iterated that United should not underestimate Richard Money's League Two outfit.
In his weekly column on the United website, Mata said:
"We want to make it to the next round and try and win this competition but in sports having respect for your opponents is key
"Even more so in football where distances have shortened, that is something we are aware of ahead of this game against Cambridge.
"Not long ago they proved to be a very tough opponent and we saw that the way they played in the first game was difficult for us.
"We are very excited about this competition and will do our best to win through to the next round."

The winners of this game will travel to League One opposition in the last 16 in the shape of Preston North End or Sheffield United who meet in their replay at Bramall Lane on Tuesday. 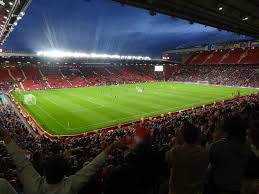 Posted by United Faithful at 06:33