The 6th February is a date indelibly marked on the calendars of everyone connected with Manchester United.

On the darkest day in the club's history, the Munich air crash claimed the lives of 23 people - eight of whom were United players - and the finest club side British football has ever seen was effectively wiped out.

Pioneering manager Matt Busby had defied the Football Association to take United into European competition and his side, known as the "Busby Babes" (even though he hated the phrase), looked set to vanquish all-comers.

Tottenham Hotspur became the first British side to win the league and cup double in 1961 but many believe that United would have done it first had it not been for the devastating tragedy.

The team's plane had stopped in Munich to refuel on the way back to Manchester from Belgrade, where we had progressed into the European Cup semi-finals after a 5-3 aggregate win over Red Star.

After two aborted take-off attempts, the third ended in tragedy when the plane never got airborne and smashed through a perimeter fence into a nearby house.

Thain was eventually exonerated, as the crash, initially thought to be caused by ice on the wings, happened because of a build up of slush on the runway.

Busby somehow survived his horrific injuries to regain full health and build another brilliant young side, who would finally realise his dream ten years on from the disaster.

In the ultimate tale of triumph over adversity, United rose from the ashes and went on to finally conquer Europe in that never-to-be-forgotten night at Wembley.

Local youth was a driving force behind Busby's dream and, fittingly, it was young whippersnapper Brian Kidd who hit the third goal in the 4-1 win over Benfica.

50 years on in 2008, United would once again channel the spirit of their fallen heroes with our third European Cup win, this time against Chelsea on penalties in Moscow.

They will never be forgotten and forever remembered. 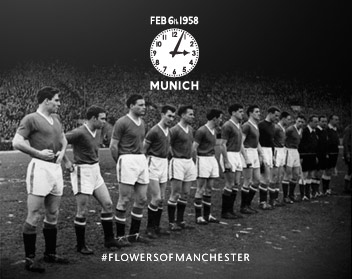 Posted by United Faithful at 05:50