Ole Gunnar Solskjaer became the first Man Utd manager to win his first six league games at the helm as the team held on against Brighton. 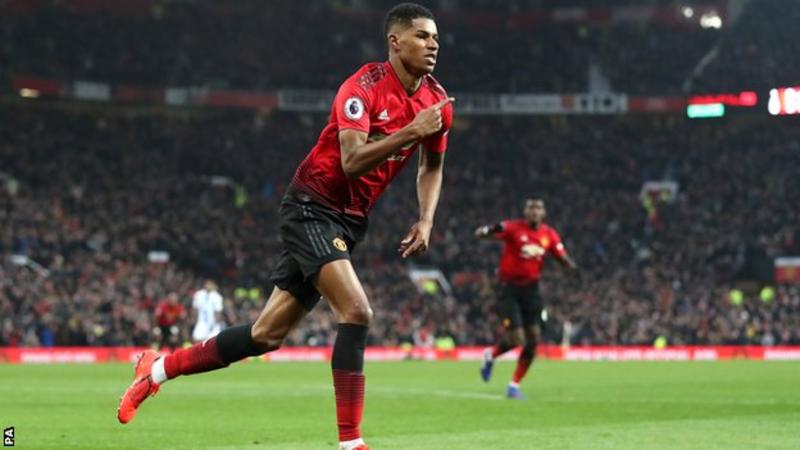 It was United's seventh straight win since the Norwegian took over at Old Trafford on an interim basis a month ago and they are now just three points off fourth-placed Chelsea, who lost to Arsenal in the late kick-off.

Paul Pogba - the epitome of United's recent upturn in form - put us ahead shortly before the half hour mark after he won and then converted a penalty.
Marcus Rashford doubled the lead just before half-time with a beautiful solo goal on his 150th appearance for the club.
Pascal Gross halved the deficit for the visitors when he scored in off the bar with just over 20 minutes remaining.
Brighton improved in the second half but their wretched away record continued as they fell to a fifth defeat in their last eight Premier League games.

Solskjaer had originally named an unchanged team - United's first since December 2017 - only for Luke Shaw to drop out in the warm up having gone down ill. That saw a late alteration with Diogo Dalot coming in to the XI.

The last time these sides met was in August, when United's season under Jose Mourinho began unravelling with a 3-2 defeat. But United's first-half performance at Old Trafford on Saturday was worlds apart from that game last summer.

On the weekend United are commemorating 25 years since Sir Matt Busby passed away, Solskjaer was on the brink of overtaking the legendary post-War Old Trafford boss, who began his tenure as manager with five straight victories in 1946.

The rekindled spirit of energy and fight was evident from the start as United set about Brighton like a pack of terriers, biting into tackles and snapping up every loose ball. The visitors were penned back and hardly able to gain possession. United’s dominance brought a free-kick from Pogba, which smashed into the wall, the Frenchman then superbly opened up the goal to create space for a shot but his effort sailed over.

To their credit, Chris Hughton's side are nothing if not resilient and well organised and began to settle into the game as they manfully withstood the early onslaught.
But the Reds continued to press and made the breakthrough when Pogba burst into the penalty area after 25 minutes and was scythed down by the ragged left-back Gaeten Bong. Pogba dusted himself down and duly despatched the spot-kick beyond the dive of the Seagulls stand-in stopper David Button.

Three minutes shy of the interval, it was the red-hot Rashford - in his 150th game - that put further distance between United and the south coast side. Pre-match SOS Dalot set it up for the local lad as he burst clear, cut inside his marker and slid Rashford through. The in-form forward's footwork was neat and tidy and his finish even better as he wriggled his way into space and curled a stunning strike into the far corner. It was his fifth strike in seven games as Solskjaer’s spearhead.

Rashford was simply and superbly unplayable as he went close twice in quick succession shortly after the restart. He flashed a free-kick wide and then came within inches of turning home a Jesse Lingard cross on the stretch.

United were certainly keeping the heat on and Anthony Martial and Pogba both displayed neat trickery to set up chances that came close to extending the Reds lead.
The game went into a quiet spell and Solskjaer prepared to inject new life into his side as he sent Romelu Lukaku and Juan Mata to the touchline, stripped and ready to come on. But before the Belgian and Spaniard could be released into the action, Brighton stunned the Reds by clawing a goal back in the 72nd minute.

It came out of nowhere as Davy Propper's cross picked out the onrushing Pascal Gross and the German pulled the ball down on his chest before he poked in off the bar.
The match had suddenly been thrown a totally different dimension as the Seagulls - now brimming with belief and confidence - started to sense an upset.
It was a whole new test for Solskjaer's side as Brighton launched a flurry of late attacks in a bid for the equaliser albeit without creating an opening of any note. The Reds were forced to swap verve for grit but Rashford picked up an injury and a booking in the closing stages.

David De Gea and co held out in stoppage time relatively comfortably, despite a few nerves, to keep the successful run going.

Posted by United Faithful at 05:01