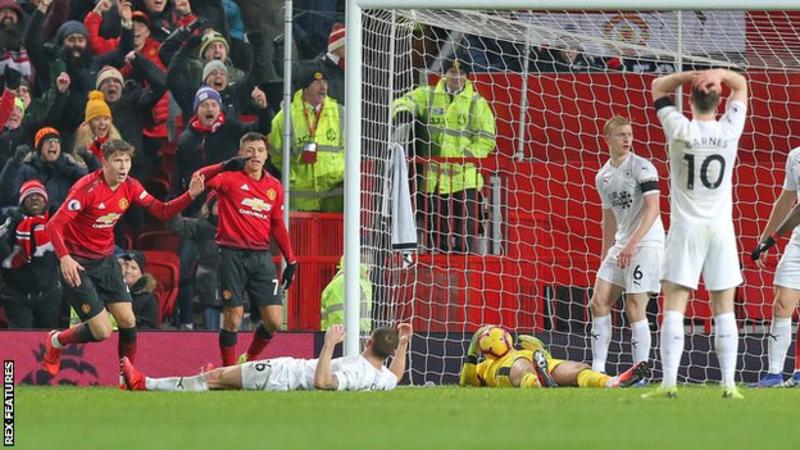 Ole Gunnar Solskjaer lost his perfect Old Trafford start but remains unbeaten as United boss after a late Victor Lindelof leveller.
The Swede bundled home his first Reds goal in the second minute of injury time to salvage a dramatic late point after Burnley - for the second year in succession - had taken a 0-2 lead.

United were facing their first defeat under the temporary tutelage of Solskjaer, until Paul Pogba scored from the spot on 87 minutes. That paved the way for Lindelof to scramble home the equaliser and ensure that Ole - despite seeing the end to our winning run - become the first Premier League manager not to lose his first seven games in charge.
Sean Dyche's lowly but improving Clarets have a wont to make life difficult for their more illustrious Lancashire rivals, as proved by their previous two visits to this parish in which they had emerged with creditable draws. They looked set to go one better this time when Ashley Barnes capitalised on a mistake by Andreas Pereira, and Chris Wood headed in Barnes cross on 81 minutes for 2-0.
That was until the thrilling, frantic and frenetic Old Trafford finale.

The slick, free-flowing and fluid United we've seen in the first month of Ole at the wheel was missing. But United still almost got the first goal in the ninth minute when the in-form Marcus Rashford exchanged passes with Romelu Lukaku and burst clear. The Belgian cut the ball back on a plate for the striker and it looked easier to score, but - despite the space he had - Rashford could only pull the golden opening wide.
Pogba had a goal chalked off and Juan Mata went close when he flashed a shot wide after a rapid counter-attack.
Tom Heaton, a thorn in our side so often, saved comfortably from Mata and Pogba but, just when it looked as thoguh United had upped the ante, the Clarets drew first blood.
Phil Jones played a ball out of defence to Andreas Pereira who seemed caught out by the pass and was robbed instantly by Jack Cork. He then fed Barnes, who slammed the ball past the stranded David De Gea before Lindelof could rescue the situation with a tackle.
Behind under Solskjaer for the first time, United had a penalty appeal waved away by an unmoved Jonathan Moss as Ashley Westwood seemed to have handled.
Heaton continued to channel his inner De Gea with a superb reflex save to repel a Lukaku volley,  but as we struggled for calm and composure, Burnley went into a stunning 2-0 lead.

After United pressure, Dyche’s side went forward and Westwood dinked a ball onto the head of Wood, who glanced easily past De Gea, while the defenders waited for an offside flag that never came.
Rashford had another penalty claim turned down, but - four minutes later - Moss pointed to the spot when substitute Jesse Lingard went down under the attentions of Jeff Hendrick. Pogba smashed the resultant penalty into the roof of the net to set up a grandstand finale.
Ex Red Heaton again looked as if he would be the hero of a magnificent Burnley reargaurd, as he pulled off another superb save to keep out Pogba. He also denied substitute Sanchez, but United weren't to be denied as Lindelof bundled in an untidy finish on the rebound for the latest of late salvos.
The Reds ran out of time as they swarmed forward in search of an unlikely winner but - ultimately - a draw was probably a fair result.