United made a winning start to 2019 as Ole Gunnar Solskjaer emulated Sir Matt Busby with victory in each of his first four games in charge.
Ole's Reds kept up the pressure on the Champions League chasing pack, with United now just three points behind place-above Arsenal and six off fourth-placed Chelsea who were held by battling Southampton. That gap was eight and eleven respectively when Solskjaer took charge three weeks ago.

The trip to St James Park has not been a happy one for United in recent years but, this time around, the Reds passed their real test of Solskjaer's temporary tenure with flying colours capped by only a third clean sheet of the campaign in the league.

Ole knows a thing or two about substitutions and his changes off the bench proved pivotal as Romelu Lukaku scored with his much-maligned first touch to break the deadlock a matter of seconds after he had come on.
Alexis Sanchez also returned to action after injury and played a part in the in-form Marcus Rashford's match sealing second in the closing stages as Solskjaer's side started 2019 in the best possible way.
In contrast to the Reds new-found run of form, Rafa Benitez's Magpies are in worrying shape at the halfway stage of the season, having picked up only seven points at St James Park all season long.

United had not won there since 2015 but rarely looked under threat this time around with Martin Dubravka - immense in his side's 1-0 win in the corresponding fixture last time - an increasingly overworked keeper.
He saved well from a Rashford free-kick before his opposite number David de Gea was soon called into action at the other end to deny Newcastle's impressive and lively winger Christian Atsu.
Soon afterwards, Phil Jones atoned for an error in the build-up by making a perfectly timed tackle on Salomon Rondon inside the area, with no margin for error.

Anthony Martial hit the side-netting after a lightning break but Atsu remained a threat as he wastefully dragged an effort across goal, following a superb through ball by Ayoze Perez. 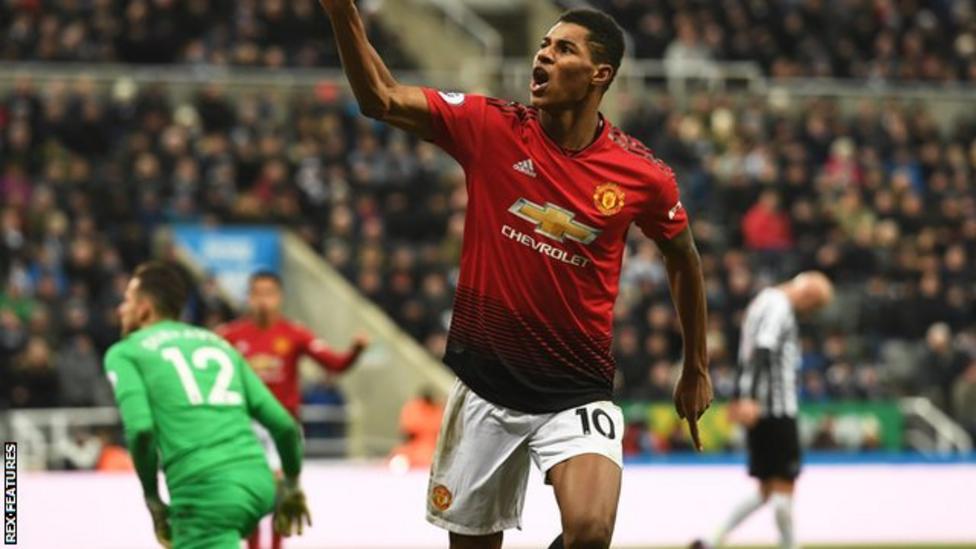 Rashford met a pass by Victor Lindelof but collided with Dubravka as he made a block, while Martial sliced onto the top of the net, after nice play by Paul Pogba and Juan Mata, as he lost his balance with the goal in his sights.
Dubravka blocked at the feet of Mata before top scorer Rondon went close again, as he nodded over the bar from close range in first-half stoppage time.
Despite their poor record in front of their own fans, Newcastle gradually grew into the game with Atsu again at the heart of everything they did. He collected the ball and flashed a shot wide before sub Jonjo Shelvey forced the lunging De Gea into a smart stop.

The Spaniard stole the ball away from the breaking Atsu as the Magpies continued to ruffle feathers, but Solskjaer then flexed his bench muscles in style with a double switch as Messrs Lukaku and Sanchez came on for Martial and the largley ineffective Mata.
The changes reaped dividends within a minute as Rashford's fierce free-kick was parried by Dubravka into the path of Lukaku, who gobbled up the loose ball on the rebound the break the deadlock.

Shelvey tried his luck from distance and Atsu went close again as Newcastle belied their lowly status with a flurry of openings. United needed another goal to make the game safe and it duly arrived 10 minutes from the end.
Rashford and Lukaku broke as the Belgian managed to make tracks unchallenged down the right. He slipped the ball inside to fellow sub Alexis and, in turn, the returning Chilean flicked on to the advancing Rashford. The red-hot striker did the rest with a clinical finish beyond the stranded and unsighted Dubravka for his sixth goal of the season and third in four games under Ole.

The combative Shelvey was then fortunate to escape censure after he lunged in on Paul Pogba, who should then have added a late third when Jesse Lingard - another sub - played him in. The in-form Frenchman skipped beyond the Slovakian keeper only to fire into the side netting.
Lukaku had a shot saved but 2-0 it stayed as rejuvenated United made a winning start to the year and maintained our superb 100% record under Solskjaer.

Posted by United Faithful at 02:14