United were beaten but certainly not outclassed as Liverpool scored early and late to clinch victory at Anfield.
Jurgen Klopp's side took another step towards their first ever Premier League title as Virgil van Dijk's header and Mo Salah's breakaway second sealed the points against a United side bereft of our two most influential players - Scotty McSauce and Marcus Rashford.

Ole Gunnar Solskjaer's side rallied and can count themselves unfortunate not to emerge with a point with Liverpool hanging on in the closing stages as United dominated most of the second half. The team will look back on Anthony Martial's gilt-edged second half opening and two good saves from keeper Alisson Becker. The fact that Liverpool are the best team and yet only put the result beyond doubt with the last kick of the match will offer Solskjaer and the Reds a huge dose of encouragement. 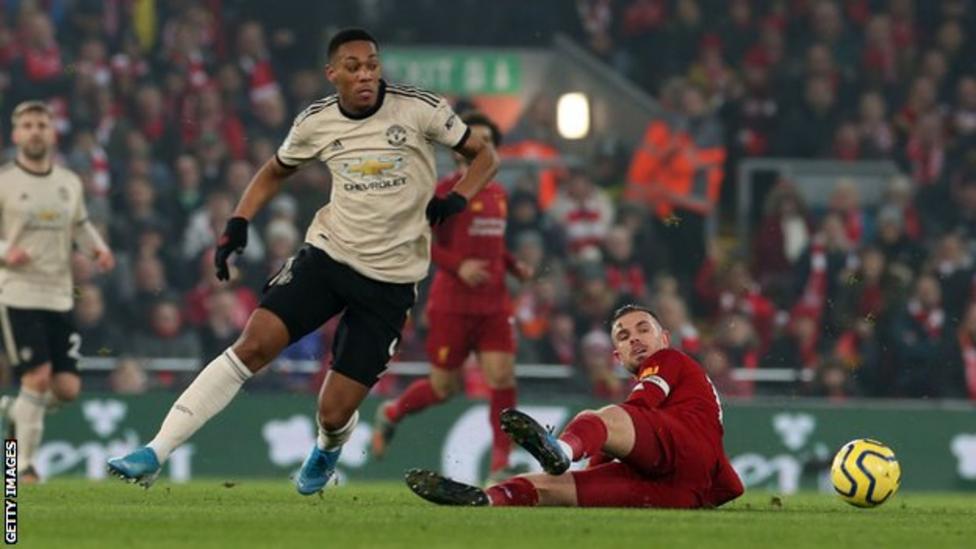 Chelsea's last gasp defeat to Newcastle on Saturday means United remain in touch with the Champions League positions, five points behind, but our own inconsistency and Rashford's six-week absence with a stress fracture points to an uphill struggle in that regard.
Solskjaer sprung a surprise by setting United up in a 3-5-2 system with Luke Shaw in a back three and Aaron Wan - Bissaka and Brandon Williams as wing-backs. The first chance of the game fell to the league leaders when Sadio Mane met Trent Alexander - Arnold's free kick, but the Senegalese's header drifted wide.

Yet Liverpool had more joy from another header five minutes further on. Van Dijk connected with another Alexander - Arnold set piece to get above Brandon Williams and power home beyond the stranded David de Gea.
Luke Shaw's last ditch tackle snuffed out the lurking Mane, and Liverpool then had another goal disallowed when Roberto Firmino thought he'd doubled the lead only for VAR to correctly judge that there had been a foul on De Gea by Van Dijk. Replays showed that our keeper was clearly impeded by the swinging arm of the giant Dutchman.

Gini Wijnaldum had a further effort chalked out, this time for offside, but United grew into the game and began to push Liverpool back.
Anthony Martial put the ball just wide with a curler, before Andreas Pereira came within inches of turning home a Wan - Bissaka cross.
Alisson saved well as United's number 15 tried his luck from distance, before Mane had a half chance on the turn at the other end.
After the interval, the hosts again started well as they looked for the second goal to kill off the tie. Firmino went close and Jordan Henderson rattled the upright with a piledriver with his effort pushed onto the post by a full stretch De Gea.

Alex Oxlade - Chamberlain fired just wide and Fred also went close at the other end before the turning point of the tie.
United worked the ball superbly to Martial - via Fred and Pereira - and the Frenchman burst into the box. With only Alisson to beat, though, he couldn't keep the ball down and blasted over from close range.

Martial and the immense Fred again tested the keeper, just after Mane cut in and flashed just wide from inside the box.
With the game still in the balance and a far from impressive Liverpool there for the taking, Solskjaer threw on Juan Mata and Mason Greenwood as the Reds manager went for it.
It almost proved an inspired change as the teenage striker came within inches of turning home a wicked Martial cross. Mata was denied by Alisson and Fred had a shot blocked, with the champions elect clinging to their one goal advantage.

United's growing threat was clear as Klopp took off his centre forward Firmino and replaced him with the defensive abilities of Fabinho.
United continued to throw men forward but to no avail as, from our own corner, Alisson thumped long and Salah shrugged off the attentions of the backpedalling Dan James to place the ball under the advancing De Gea.


Overall team performance: 7/10
Man of the Match: Fred. Immense. The best player on the pitch by a distance.

Posted by United Faithful at 03:27