United's season hit a new low as Burnley deservedly claimed their first ever win at Old Trafford on a night of toxicity.

The Clarets took the lead shortly before half-time when Chris Wood spun Harry Maguire to meet a Ben Mee knockdown and smash in from six yards. 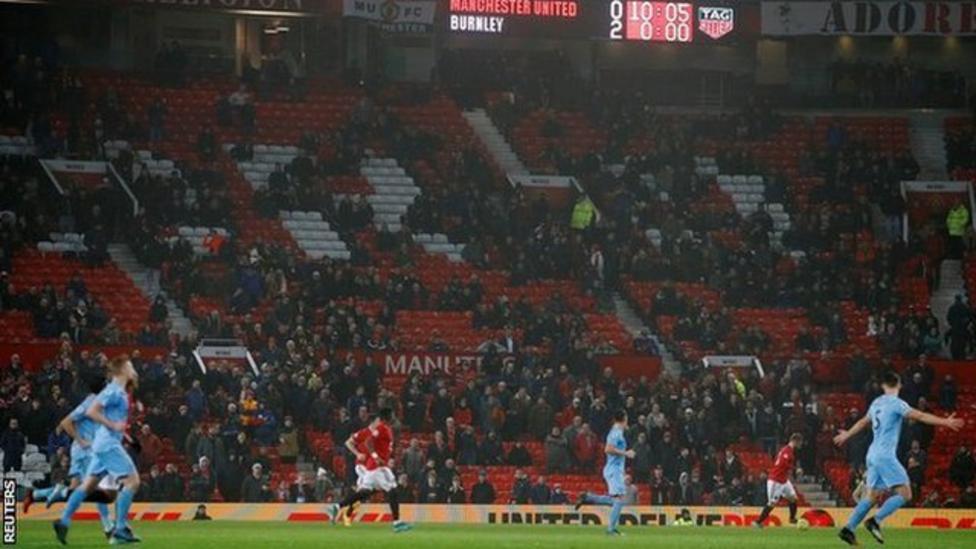 Jay Rodriguez doubled the visitors lead when he played a one-two with Wood and slammed a dipping effort beyond David de Gea from distance.

It was the third season in a row that Burnley had taken a 2-0 lead at Old Trafford but the first time they secured all three points. To say they had to hang on would be doing Dyche's men a bold disservice. They were comfortable, compact, superbly well organised and never looked troubled for their first victory at OT for 57 (FIFTY SEVEN) years.
United - bereft of the injured Marcus Rashford - were lacklustre for long periods and barely threatened Nick Pope in the Burnley goal. Substitute Luke Shaw thought he had set up a frantic finale but his header was ruled out by VAR for a push on Jeff Hendrick.
By then, thousands had left Old Trafford in their droves and the stadium was virtually empty by the time referee Jonathan Moss had blown for full-time. It was a night when the anti-Glazer movement stepped up a gear but that failed to mask the plethora of shortcomings for Ole Gunnar Solskjaer's side.

Aaron Wan - Bissaka proved United's most impressive performer as he turned in his most impressive attacking 45 minutes in Red.
A trio of searching crosses almost provided the opener but Dan James, Juan Mata and Anthony Martial respectively were unable to find the breakthrough. Martial continued to deputise for United's stricken leading scorer but looked short of confidence and fitness as he toiled in vain.

Nemanja Matic also set up the Frenchman but he snatched at the opening and Burnley left-back Taylor managed to rescue the situation with an excellent lunging tackle.
Wood went close with a header but we failed to heed those warnings as Burnley moved ahead with their next attack.

Phil Jones, in for the ill Victor Lindelof, gave away a free-kick and the set piece was lumped forward into Mee, who flicked on for Wood to lash home despite the attentions of Maguire.
Before the Reds could draw breath after half-time, it was 0-2. If the first goal was a typical Burnley one, the second one was out of character with Dyche's obdurate and awkward Clarets.
A swift, smart passing move cut United open and Rodriguez stunned Old Trafford into silence with a stunning left-footed strike that flashed high beyond De Gea who had no chance.
James went just wide and Juan Mata then should have done better with a free-kick but the in-form playmaker was off target as he put it over the bar.
Pope blocked from Martial and Greenwood flashed a shot wide, but the visitors did what they do best and mopped, blocked and stopped everything that came their way.

Shaw's 89th minute header looked to have started a dramatic late fightback but a bleak night was summed up when it was ruled out.

Posted by United Faithful at 02:18