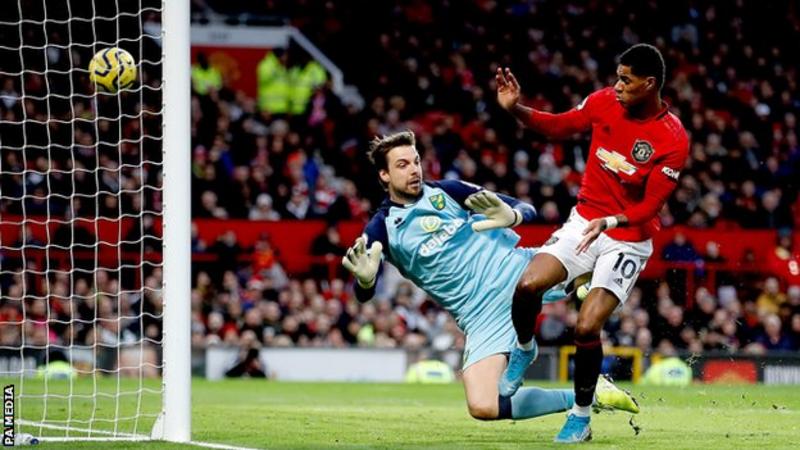 Marcus Rashford scored twice on his 200th United appearance as Ole Gunnar Solskjaer's side hit four against bottom of the table Norwich.
It was the perfect response from the Reds after being comprehensively outplayed by Manchester City in midweek with four goals, a clean sheet and a return to fifth place in the Premier League table.

Rashford became the third youngest player in Old Trafford history to reach the double century milestone and opened the scoring when he stabbed home an excellent Juan Mata cross.
United were dominant throughout and extended the lead when red hot Rashford hit his 19th goal of the season from the penalty spot after Brandon Williams had gone down under a challenge from Canaries keeper Tim Krul.

Anthony Martial, himself close to a double century of United games, headed in the third from another pinpoint pass from Mata just shy of the hour mark.
Mason Greenwood continued his breakthrough season as he stepped off the bench to stroke in a lovely finish for the fourth 14 minutes from the end to add gloss to the scoreline.
The East Anglia basement boys were missing top scorer Teemu Pukki and so handed a full debut to 18-year-old striker Adam Idah.

There was little indication of the rout to follow as Daniel Farke's men started brightly and had the best chance of the opening moments. Kenny McLean flashed a shot wide when well placed after a lovely run and cross from Todd Cantwell.
It had been a difficult start to 2020 for Solskjaer's side with defeats to Arsenal and Man City sandwiched by a dire FA Cup draw at Wolves in which we failed to muster a shot on goal.
This, though, was a throwback to the early days of Solskjaer's temporary tenure as United monopolised possession and took their chances albeit against a struggling side whom look destined for an immediate return to the second tier.

United had been in control before the deadlock was broken, as Krul saved well from Andreas Pereira and Fred flashed a trademark drive wide from distance.
On 27 minutes, United broke through as Victor Lindelof found the recalled Juan Mata and he in turn picked out Rashford who beat Krul to the ball and knocked beyond the stranded keeper.

David de Gea had been a virtual spectator but was suddenly and unexpectedly called into action when Cantwell collected the ball from deep, turned and fired towards goal. His low curler looked destined for the bottom corner but De Gea got down brilliantly to tip the ball wide.

Rashford outfoxed Sam Byram with a stunning 'elastico' piece of skill but although United had looked the stronger, the failure to kill teams off has been an Achilles heel for Solskjaer's side this season.

It took the Reds seven minutes into the second half to extend their lead and effectively put the game beyond the visitors. Williams went down as Krul challenged United's left back for the ball and after the obligatory VAR check, Rashford stroked home from the spot.

Martial made it 3-0 two minutes later after another Mata cross, Nemanja Matic shot wide and substitute Greenwood was denied by Krul shortly after he had come on.

Williams somehow failed to score when he blazed over from two yards in front of the Stretford End after Mata had played him in, but Greenwood was not to be denied.
He added his ninth of the season and United's fourth with a trademark left-footed finish as he stroked home from 20 yards to wrap up the scoring.

Krul saved well from another substitute, Dan James, and Emi Buendia went close at the other end but that proved to be the final action as the Reds picked up a welcome win and clean sheet to boot.