So it's official. Bruno Fernandes is a Manchester United player. Yesterday we penned on these pages that a deal for the player had been agreed and shortly after 5pm on Thursday United confirmed the signing on a five and a half year deal. 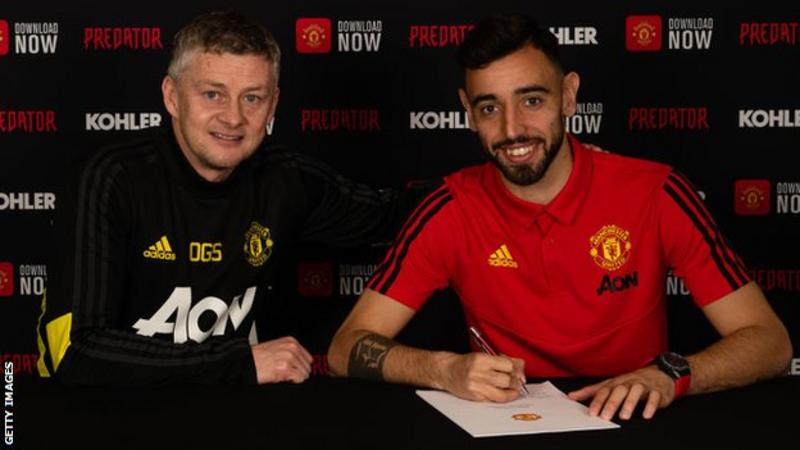 Having strengthened the defence during the summer, it was blindingly obvious that we needed a creative spark and sprinkling of stardust to replace the departed Ander Herrera and the stricken duo of Paul Pogba and Scott McTominay. I very much hope that Fernandes will be that man.

Fernandes flew to Manchester yesterday and was pictured at Carrington in the iconic Red with his contract on the table having agreed personal terms and passed his medical. The Portuguese international is set to go straight into the squad for Saturday's Old Trafford meeting with the Old Gold of Wolves.
The initial fee for the 25-year-old is set at £47m but add ons could see that rise to around £67.7m. Nonetheless, he represents a significant upgrade to the side and hopefully this marks the end of Jesse Lingard's days as a regular. Fernandes can come in and dislodge both Lingard and Andreas Pereira from first team duty straight away. Capped 19 times by Portugal, he has scored twice and helped his team to UEFA Nations League glory and also played at the 2018 World Cup.

Bruno was a relative unknown when he arrived at Sporting Clube from Italian side Sampdoria but quickly became one of the most exciting and sought after players on the continent.  Fernandes won the Portuguese league's Player of the Year award back to back in 2018 and 2019.  Described by former Swansea manager and compatriot Carlos Carvalhal as a 'player from another level', and touted as a player with great leadership, his transfer - despite its protracted nature - had been expected for some time.

United manager Ole Gunnar Solskjaer told ManUtd.com: "We have been tracking Bruno for a while now, and everyone here has been very impressed with all his attributes and what he will bring to this team.
"Most important he is a tremendous person with a great personality and his leadership qualities are clear for all to see. His goals and assist stats speak for themselves, he will be a fantastic addition to our team and will help us push on in the second half of the season.
"The winter break is coming at the perfect time for us to integrate Bruno into the squad and for him to get know his team mates."

Despite having already played for former side Sporting Lisbon in the Europa League, Fernandes will be eligible to turn out for us in that competition when it resumes next month with the "cup tied" rule having been abolished.

The signing of Fernandes is the biggest of the January window so far and he follows Marcos Rojo and compatriots Cristiano Ronaldo and Nani in making the move from the Portuguese capital to M16.

I don't know much about him but I'm told he's very good and I can't wait to see him in the Red of United. We don't know yet what squad number he will be given.