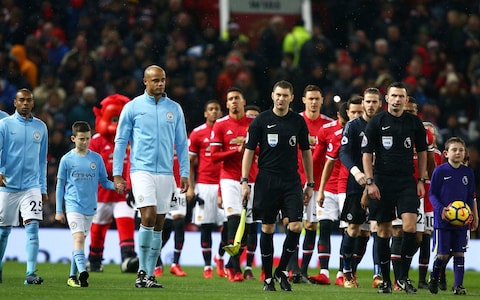 It's Matchday 12 in the Premier League and the eyes of the world will again be honed on Old Trafford as United and City go head-to-head in the 183rd Manchester derby.
The two city rivals endured contrasting Champions League fortunes as United were eliminated despite a late fightback in Germany, but Pep Guardiola's side secured progression the last 16 as group winners.
Ole Gunnar Solskjaer's side have been consistently inconsistent, with no one ever quite sure which United team will turn up. City similarly started slowly but have started to click into gear although arrive at Old Trafford a point and a place behind United in the league. With that in mind, we run the rule over both sides talents and comprise a theoretical combined XI.

We haven't considered injured players, only men that are fit and available for the fixture, so without further ado, here is our team that we would call, fittingly, a City United. We're going for a 4-4-2 formation.

Two of the best keepers in the league will go head to head - on their day both are almost impeachable, but both are equally as culpable of being error-strewn. The recent dip in David De Gea's form pushes him behind City's Brazilian in this selection, even though Ederson is far from infallible. The latter has pilfered eight clean sheets to the Spaniard's three, although admittedly has a better defence in front of him. Our over-riding memory of Ederson in this fixture is his loose throw out - seized upon by Scott McTominay - back in March. On current form, you have to go with the Brazilian.

This is a straight shoot-out between "The Spider" and Kyle Walker. The latter has been the epitome of the modern day full-back, with his crossing and strength in the tackle considered among the best in the Premier League. Wan - Bissaka may not be as good going forward, but there are very few better defensively and I just feel he's the better player out of the two. It depends what you want from a full-back, but Walker's star is perhaps on the wane and, despite a bit of a dip from Wan - Bissaka, he gets the nod based on pure out-and-out full-back play.

Frenchman Laporte has been injury-ridden but, when fit, is the best centre-back across both teams. He is a certain starter and has been one of Pep Guardiola's best signings since taking over at the Etihad. City had a makeshift defence of Fernandinho and Nicolas Otamendi in both games last year, but their backline is looking much more miserly this time. You have to be good to get past Laporte with much of the burden in doing so on his United compatriot and opposite number, Anthony Martial.

Picking Laporte's partner was one of the difficult choices in our combined side. Statistically, Harry Maguire has bettered any other City centre-back, but the team have also kept one more clean sheet and conceded eleven league goals to United's seventeen. The sample size is small, but Dias has made a strong start to his Manchester City career and you feel that neither of United's first choice centre-backs would get in ahead of him. Based purely on pound-for-pound quality and the fact he plays in a better defensive unit, Ruben Dias takes the other spot in this all-City centre back pair.

Another difficult position to pick given that Alex Telles has only just arrived, whilst Benjamin Mendy and Oleksandr Zinchenko have been inconsistent and have struggled for form and fitness. I'm yet to be convinced by Telles from an admittedly small sample size, even though the new United left-back has been filling in for the injured Shaw of late. None of the other contenders have covered themselves in glory but Shaw had a good season last year and had impressed before his latest spell on the sidelines and so gets the nod despite the fact Mendy scored his first City goal in the recent win over Burnley.

Mason Greenwood is a generational talent but this is only his second senior season and the mercurial Mahrez is a player in fine fettle. The Algerian took his time to get going in the sky blue of City but hit a devastating hat-trick in the rout of Burnley last time out. We've picked another possible contender for this position in his more natural role of an out and out forward, so Mahrez gets the nod with the teenage wonderboy of Greenwood waiting in the wings, no pun intended, to come on later if needed.

No defensive minded player in this XI with Fernandinho in the twilight of his career and Rodri, although impactful, not on the same level as the Brazilian. David Silva's departure has left a gaping hole in the City midfield, so it can only be the two stand out stars of their respective sides for the central midfield positions. Both of these positions are no brainers, with Fernandes having scooped his fourth player of the year award and quickly becoming the beating heart of Manchester United - this side's inspirational and talismanic figurehead. Fernandes tops the Reds scoring charts with ten, and his mere presence transforms the entire dynamic of this Manchester United side. What a player.

De Bruyne has yet to reach the metronomic heights of previous seasons but is as important to City as Fernandes is to us. City's Player of the Season last term also won the PFA Player of the Year and Premier League Player of the Year last term and has created 72 of City's last 164 goals. Although he has only scored twice this term, he has reached double figures in terms of assists and remains Pep Guardiola's go-to match winner. Like Fernandes, when De Bruyne plays well, so do City. Widely regarded as one of the finest exponents of his craft on the planet, De Bruyne is simply undroppable. Never mind the lack of balance in this selection, we can only drool at the creativity levels these two would provide.

The winger has developed from unpolished diamond into a goal machine, and he remains one of City's most important string pullers in chief. Sterling can play anywhere across the front, and there's no United player even close to him in the competition for places here. Anthony Martial can play off the left but is the epitome of inconsistency and simply doesn't justify a spot in this side so its Sterling all day long. Leroy Sane would have given Sterling a run for his money but the German has departed to his homeland so Sterling is a certain starter. He was involved in both goals against Fulham and will be ready to resume his personal battle with Aaron Wan - Bissaka. 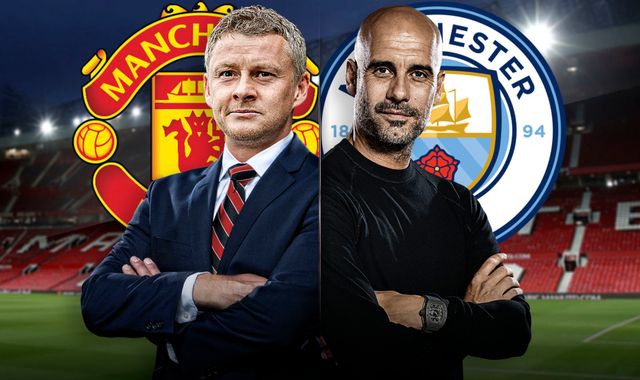 Taking Rashford out of his position on the flanks to a central striker role, we wanted a homegrown Academy boy in our selection. Rashford has been in winning form on and off the pitch and knows, more than anyone else, what this fixture means. In the last four league games, Rashford has either scored or assisted and almost bailed the Reds out with a dramatic late equaliser in Leipzig in midweek. Rashford hit double figures for the season with the game-winning clincher at the London Stadium and has a decent record in front of goal against City having scored in two of the four derbies last term.

The net-busting Argentine may be injury hit and in the latter days of his career but he is City's record scorer and one of the finest strikers the Premier League has ever seen. Gabriel Jesus is set to lead the line in the derby with Aguero on the bench as he recovers from his latest injury problems. Aguero has been the scourge of United in many a derby, becoming one of the top scorers in all-Manchester meetings history, up there with Wayne Rooney. Aguero may not be the unstoppable force of old, but he is still a fantastic player and one for the Reds to be wary of. Edinson Cavani is injured and unlikely to feature, Martial is nowhere near this discussion and Jesus doesn't warrant selection here.