Late goals from Edinson Cavani and substitute Anthony Martial set up a Manchester derby in the semi finals of the Carabao Cup. The rotated Reds had dominated at Goodison Park but it looked as if they would have to settle for the lottery of a penalty-shootout with the quarter-final tie goalless after 87 minutes. That was until Cavani, who netted his first Reds goal on this ground in the league last month, returned to haunt Everton again with a brilliant curler having been found by Martial.

The Frenchman himself made sure of the win with a low finish in the final seconds to send United into a fourth last four match under Ole Gunnar Solskjaer. The Reds lost three semi-finals last season and will now have the chance to end City's run of dominance in this competition when the two meet in a one-legged game at Old Trafford in the New Year.

With this the first of three games in six days, Solskjaer made nine changes from the 6-2 win over Leeds as only captain Harry Maguire and Bruno Fernandes kept their places. Axel Tuanzebe came in at right-back, Eric Bailly returned alongside Maguire and there were starts for Nemanja Matic, Donny van de Beek, Alex Telles and Cavani. It was still a strong-looking side despite Solskjaer shuffling his pack.

Carlo Ancelotti also made three alterations but, again, still selected a strong side with the Toffees searching for their first silverware in a quarter of a century.
The Reds had started like a train against Leeds and continued that here, with Everton barely even able to get a foot on the ball as United opened at breakneck intensity.
Van de Beek had an effort blocked having linked with Paul Pogba, before stand-in stopper Robin Olsen saved twice to deny Cavani with a snapshot and then on the rebound.
Pogba nodded straight at the keeper, Cavani went close with a drive and Mason Greenwood headed off a post as the Reds laid siege in the opening half hour.

Dominic Calvert - Lewin headed straight at Dean Henderson at the other end, and the United stopper was then belatedly called into action as he pushed away a Gylfi Sigurdsson free-kick.
Fernandes also saw a set-piece saved by Olsen, and Pogba then flashed a shot wide from distance, but the Reds were unable to make the pressure count and - despite our superiority - went in at half-time with the game still goalless.

Solskjaer's side continued to dominate as Cavani superbly pulled the ball down, spun and thumped in a shot, only to see Olsen tip the ball away for a corner.
Richarlison limped off after a coming together between him, Fernandes and Bailly, whilst Martial and Marcus Rashford replaced van de Beek and Greenwood on 67 minutes as United continued to press for the winner. 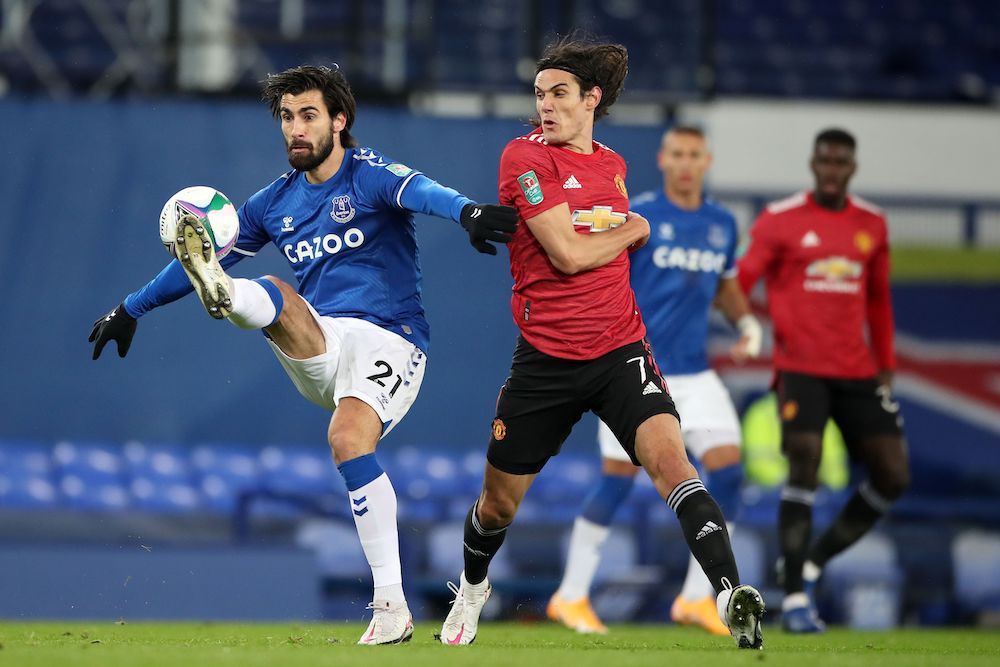 Telles was narrowly off target with a trademark set-piece but, just when United needed one last effort, clear cut chances lessened.
A dreaded shoot-out now looked inevitable but United had reckoned without the net-busting instincts of Cavani. Matic won the ball in midfield and moved it on to Martial, and he burst clear down the left to pick out the lurking Uruguayan. Cavani cut in and curled into the corner with two minutes left to finally break the elusive deadlock.

There was no time for Everton to come back and Martial turned from provider to scorer as he rubbed-stamped the result in the final minute. As the Toffees poured forward in desperation, a trademark counter-attack culminated in Martial's low finish into the corner beyond Olsen for his fourth of the season.

United were drawn with Pep Guardiola's holders - winners three times in succession - in the semi-final in a repeat of last season's match-up. League Cup specialist Jose Mourinho will bid to take his Spurs side to Wembley as they face Brentford in the other tie.