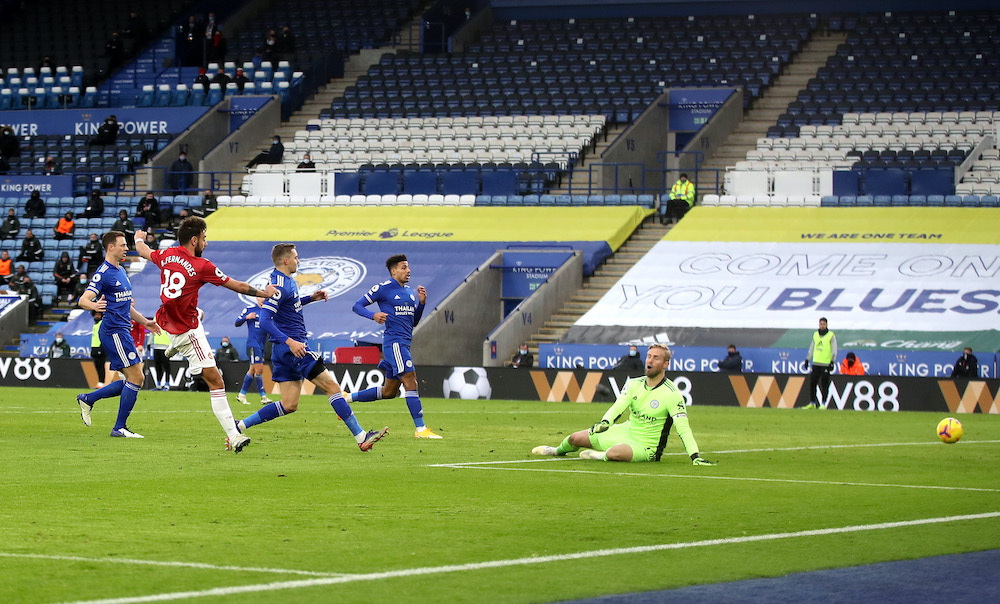 Manchester United were forced to settle for a point as a late Jamie Vardy leveller denied Ole Gunnar Solskjaer's side a record-equalling eleventh successive away league win.
United had led twice through Marcus Rashford and Bruno Fernandes but were pegged back each time by the Foxes, as both sides retained their pre-match position in the table of second and third respectively, with Leicester three points behind Liverpool and one ahead of place-below United, who have played a game less.

Harvey Barnes cancelled out Rashford's opener and the ageless Jamie Vardy pilfered a precious point late on after Bruno Fernandes - who else - looked to have won it for United.

The boss made one change from the side involved in the demolition of Leeds as Eric Bailly replaced the injured Aaron Wan - Bissaka. Victor Lindelof switched to right-back with the Ivorian in central defence.

In a thrilling Boxing Day bonanza, this was a high octane encounter from the get go between two of the top division's leading lights.

Rashford sent an early header wastefully wide when he should have done better, before Vardy went close on the volley having nipped ahead of Bailly after James Justin had picked him out.

Fred thwarted Marc Albrighton and Vardy pulled a shot wide only to see a linesman put the flag up for offside.
The game lapsed into a more systematic pattern after a frenetic start and United went ahead on 23 minutes.
Dan James cut in and found Fernandes and he, in turn, moved the ball on to Rashford. The in-form striker did the rest with a clinical low finish beyond Kasper Schmeichel to put the Reds in front for his half-century of league goals.

Despite the fact the Foxes had not mustered a shot on target at that point, a response was not long in coming as the high-flying hosts equalised only eight minutes further on. Fernandes had played his part in our opener but he was inadvertently involved at the other end as he lost possession after trying to nutmeg James Maddison. The Leicester playmaker scooped the ball into the path of Harvey Barnes and he fired home a dipping, venomous effort beyond the stranded David de Gea.

Fernandes almost atoned for his error when he headed narrowly off target from a Luke Shaw cross two minutes shy of the interval after an end-to-end first half.
Justin snuffed out a dangerous United counter, but back came Leicester to go close at the other end as Maddison's free-kick was deflected to safety off the wall. 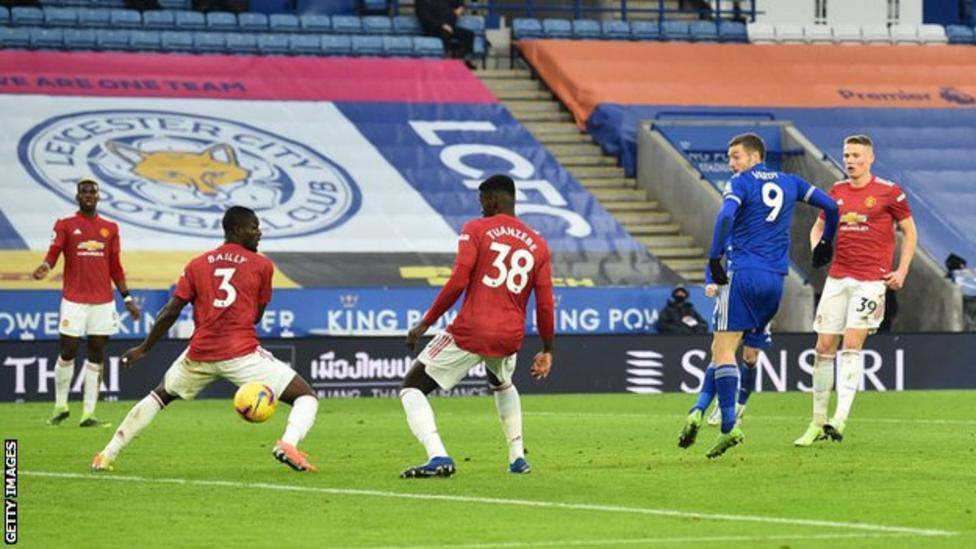 Schmeichel produced a stunning one-handed save to deny Rashford when one-on-one, before Martial had a goal correctly chalked out having strayed into an offside position after his strike partner had played him in.

Maguire headed over the bar against his old side but the captain was celebrating soon afterwards as the Reds restored their advantage on 79 minutes. Scott McTominay found substitute Edinson Cavani and the hard-working Uruguayan flicked the ball into the path of Fernandes and he finished with aplomb from close range - his fourteenth goal of the season before 2020 is out.

But, for the second time in the game, it was to be a lead United would relinquish as we were made to pay for our profligacy
. With five minutes left, Ayoze Perez picked out the ever-dangerous Vardy and he swept the ball home - via United sub Axel Tuanzebe - to level. Perez went close and Schmeichel denied Cavani but there was no more late drama as things ended all square. In truth, a draw was probably a fair result.

The point apiece ended our record-equalling ten-match winning run away from home, only one short of the record set by Chelsea in 2008.