The 183rd all-Manchester meeting ended all square as United and City shared the spoils in a dreadful derby at Old Trafford.
In a dismal match devoid of quality and excitement, neither side were able to carve out the opportunity to make the difference amid the eerie silence of a deserted Theatre of Dreams. This was a tie lacking everything that makes a derby special and will be an instantly forgettable encounter starkly in contrast with some of the epic classic on this ground. The result ended United's four match winning league streak but at least extended our unbeaten run.

There were hardly any chances of note and the closely-contested encounter mirrored the league table with Ole Gunnar Solskjaer's United and Pep Guardiola's City locked together in eighth and ninth respectively.
After our unfortunate Champions League KO in midweek, Solskjaer reverted to a more familiar system as he returned to a back four and made two changes with midfield pair Paul Pogba and Fred coming in to the side in place of Alex Telles and Nemanja Matic.

United went closest early on through last season's derby hero, Scott McTominay. Victor Lindelof flicked on a Luke Shaw corner and McTominay stuck out a foot, only to see the ball narrowly evade his lunge.
The Reds main threat came through set-pieces, and another flag-kick almost led to United's opener. A Bruno Fernandes cross deflected behind and Shaw's inswinger was met by the United skipper, but Harry Maguire headed narrowly over when well-placed. Guardiola's City slickers had shown ominous signs of clicking into gear in recent weeks, but United kept them at arm's length with a resilient and disciplined defensive showing. 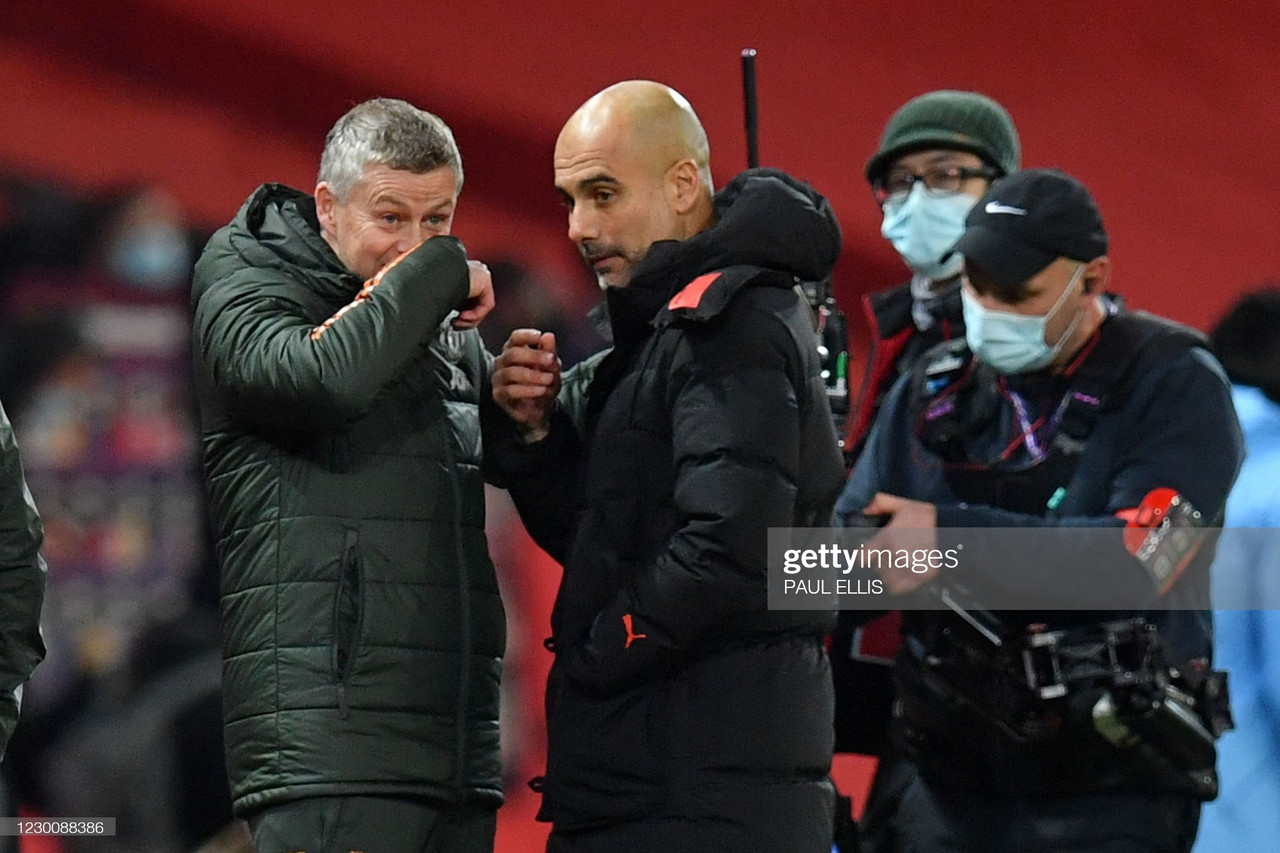 Raheem Sterling fired wide and Gabriel Jesus blazed off target having been put through by Riyad Mahrez, but the clearest chance of the half - maybe even the entire game - fell to City on 35 minutes.
The Blues broke at pace as Sterling linked up with Rodri to play in Mahrez, and his low effort was well saved by the onrushing David de Gea. The rebound ran free and fell to Kevin de Bruyne, but the Belgian was uncharacteristically wayward with his effort.

Lindelof headed over from yet another set-piece, a Fernandes corner this time, but the two sides went in level after the stalest of first half stalemates.

It looked as if the breakthrough was not long in coming shortly after the restart when Marcus Rashford burst clear and was felled by Kyle Walker. Manchester-born referee Chris Kavanagh awarded a spot-kick, but replays showed the United no.10 had strayed offside and VAR correctly over-ruled the official.

The excellent Maguire blocked superly from De Bruyne and Mahrez flashed wide before United sent on Anthony Martial in place of Mason Greenwood with 15 minutes to play.

The rest of the game passed without incident, although City started to get a grip of the derby with a lift in movement and tempo as the tie entered the last ten minutes.
United broke out of the Blues press and carved out an opening to win it, inevitably through Bruno Fernandes. Rashford found the Portuguese 20 yards out and well placed, but his shot summed up the tepid state of affairs as he fired weakly at the under-worked Ederson.

Fernandes flashed another effort wide in the closing moments but any late drama would have been out of keeping with an awful encounter that won't live long in the memory.
United face their two namesakes from Yorkshire in our next two contests, as we travel to winless Sheffield and then host old rivals Leeds at Old Trafford five days before Christmas.