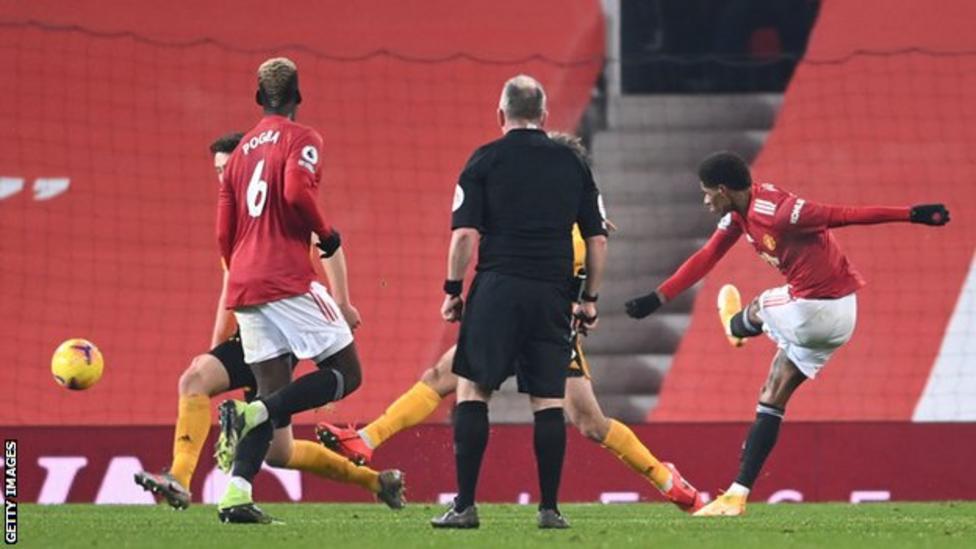 Marcus Rashford struck deep into injury time to win it for Manchester United and send Ole Gunnar Solskjaer's side second.
In their final game of a year like no other, the Reds had toiled for 90 arduous minutes against a resilient and resolute Wolves side and looked set for a second successive draw as Nuno Espirito Santo's toothless visitors so nearly claimed the point they had come for.

That was until Rashford, not for the first time in 2020, took centre stage as Harry Maguire kept the ball in rather than opting for a throw in, and found Bruno Fernandes. The Portuguese magnifico played a defence-splitting pass to Rashford and United's no 10 took the ball down, cut inside and fired home a finish with the aid of a deflection off Roman Saiss in the third of five additional minutes. A game that was heading for a familiar stalemate turned into late Happy New Year glory.

The result carried United into second position, two points behind champions Liverpool, who play on Wednesday, with a game in hand. Solskjaer made six changes from the side that drew at Leicester with Aaron Wan - Bissaka, Alex Telles, Paul Pogba, Nemanja Matic, Mason Greenwood and Edinson Cavani in for Victor Lindelof, Luke Shaw, Scott McTominay, Fred, Dan James and Anthony Martial as Solskjaer shuffled his pack amid the hectic fixture schedule.

After United's thrilling 6-2 victory over the old enemy of Leeds, this was a predictable come-down between two sides who redefine the definition of drab encounters.
David de Gea was the busier of the two keepers early on, as he saved well from Pedro Neto, Vitinha and Ruben Neves. Saiss struck the top of the bar from a set-piece, before United sparked into life and went close at the other end through Fernandes, with Rui Patricio alert to the danger. He pushed away Fernandes header after Mason Greenwood had picked out the onrushing playmaker.
De Gea was tested again as he kept out another effort from the impressive Saiss, after the centre-back had flicked on an inswinging Neto set piece.

Shaw replaced the injured Telles at the interval, and the substitute left-back instantly added more urgency to United's play with a series of darting runs down the left. One such burst saw Shaw cut the ball back to Greenwood, whom flashed a shot wide. But United had toiled in front of goal, urging Solskjaer to add Martial to the attack in place of the young winger on 65 minutes.

Four minutes later, and Cavani looked to have netted his first Old Trafford goal when he turned home a loose ball, only to be flagged offside after a VAR check despite a check for handball against Conor Coady. 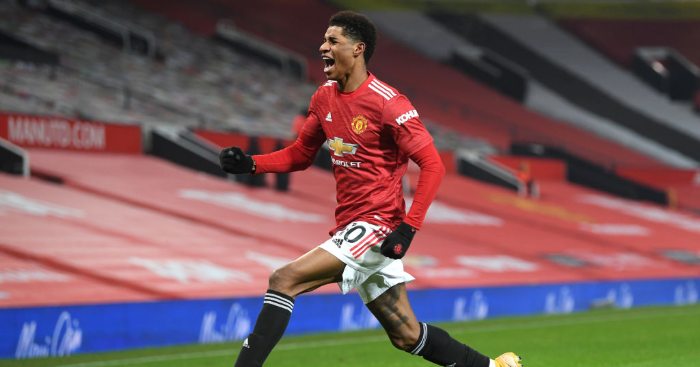 Paul Pogba sprung into life and went close from distance with a drive and compatriot Martial then should have done better soon afterwards as he lifted the ball over the bar from close range. At the other end, De Gea had enjoyed a quiet second half but was called into action from nowhere on 77 minutes. Wolves burst forward as Ruben Neves swept the ball on to substitute Daniel Podence but his goal bound effort was clawed to safety by De Gea, who reacted well to tip the ball over the bar.

United had started to take control as an attacking force but it looked as though they would have to settle for another frustrating point against a limited Wolves team. Up stepped hero Rashford to strike home the winner, however, and sent United into 2021 in the finest of fettles. Ole's tricky Reds!