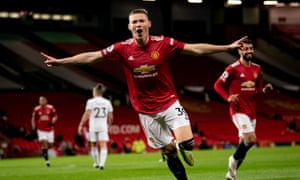 Manchester United put Leeds to the sword in a stunning display of attacking football epitomised by Scott McTominay.
On a day when every United man played his part in a victory for the ages over our old rivals from across the Pennines, McTominay emerged head and shoulders above the rest.
The Lancaster-born Scot was eight the last time these two sides met at league level, but, in a game not for the faint hearted, you'd never know he was a virgin of this fixture. In a dominant and devastating team showing, McTominay epitomised everything United did with a virtuoso individual performance. It was by far the best showing of his fledgling Old Trafford career to date.

At times, McTominay seemed to be on a one-man crusade to grind Leeds into the dust and to make them squirm. Left out of the team on Thursday night for the trip to Bramall Lane, it seemed clear that Ole had him in mind to start here, ensuring his charge stayed fresh and fit for a fixture where work rate would be key. Having done so - he certainly didn't disappoint. Against a side that would run until they dropped and with a press to die for, McTominay turned into a hybrid of Paul Scholes, Andres Iniesta, Roy Keane, Zinedine Zidane and Andrea Pirlo rolled into one.

McTominay, remarkably when you consider the impact he had, only touched the ball 38 times against Leeds. But it's what you do with it that counts. He was a furious force, immediately setting the tempo with his running, movement, clinical finishing and physicality. Not in the usual way that he tackled everything that moved, but he channelled his inner Scholes by bursting forward from a deep-lying playmaker role.

Arriving late in the manner reminiscent of our flame-haired midfield maestro, McTominay thundered in a 25-yarder and then doubled the lead 24 seconds later with a beautifully caressed finish after a shimmy and a step over. In doing so, he created a unique piece of history as the first man ever to score twice in the opening three minutes of a league game. Marcelo Bielsa's philosophy thrown out the window inside five minutes by simple but wonderfully executed football. Leeds had waited 16 years for this fixture only to see their hopes left in tatters by one of our own and a man on a mission. Is there anything better than that?With the possible exception of securing a derby double from 40 yards at the Stretford End... luckily for Scott, he's done that too..

Deployed in defensive midfield alongside Fred in Solskjaer's preferred 4-2-3-1, McTominay was so much more than simply a holding player. He scored twice, set up Dan James for the fifth and was involved in another. His energy levels were through the roof, he constantly kept the team moving with his range of passing, he linked the play, started attacks, finished them and proved the very definition of box to box. McTominay now has more league goals than Chelsea's £75m Kai Havertz with three, the same as Anthony Martial.

Although McTominay hobbled off clutching his groin in injury time, his immense energy at the heart of the team was key - despite their revered work-rate, Bielsa's side only ran 2.6km further than United. His intensity and energy never allowed Leeds to play through midfield, driving the Reds forward at will to exploit the gaping holes left behind by a very naive Leeds team.

Much of the pre-match talk centred on the play-making influence of Leeds Kalvin Phillips, a man synonymous behind his side's rise to Premier League prominence. Having been so impressive as to be capped by Gareth Southgate's England, Phillips was rendered virtually anonymous here in the face of an onslaught from his opposite number. McTominay never gave Phillips room to breathe, and he was hooked by Bielsa at the break. A huge credit to the United man.

It wasn't just his running and awareness off the ball that impressed, either. McTominay, believe it or not, used to play as a striker and this encounter was a rare reminder of his ability in the attacking side of United's game.

I'm very pleased for a young player I like and rate highly. Often a easy target when the team aren't playing well, yesterday highlighted just how important McTominay is to this side. On this type of form, there aren't many better at what he does.