Bruno Fernandes struck a stunning opening day hat-trick as Paul Pogba claimed four assists on a day Raphael Varane was officially unveiled as a Red.
The £43m French international, signed from Real Madrid, was introduced to an already fervent Old Trafford crowd shortly before kick-off as fans returned with the iconic old ground at full capacity. 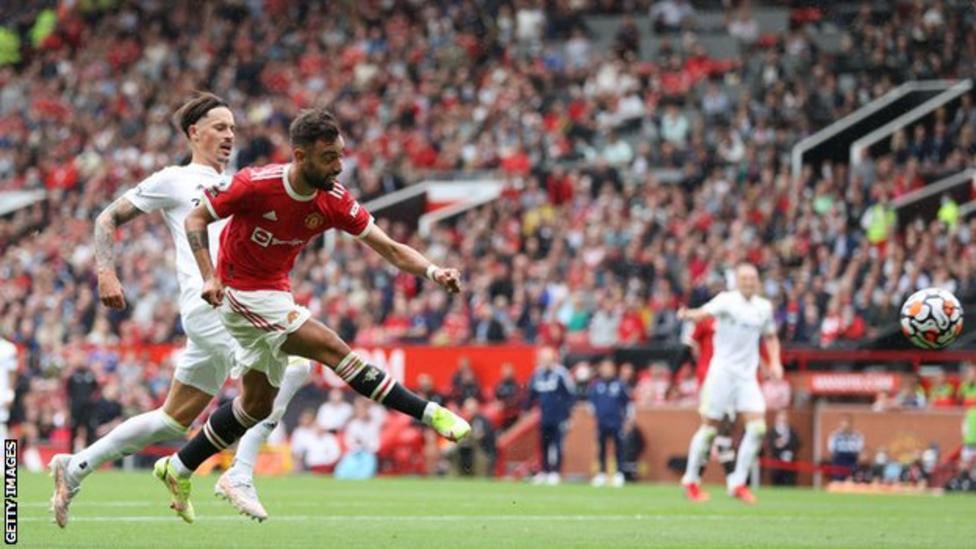 Fernandes picked up the mantle and carried on his magnificent form from 2020-21 as he set United on their way with a dinked opener on the half hour.
Although Leeds levelled through Luke Ayling - arguably the best goal of the game - the Reds responded superbly as Pogba played in Mason Greenwood and then set up Fernandes to fire in the third. The Portuguese magnifico volleyed in an excellent strike to seal his first Reds treble
before Fred joined the party to put the seal on a famous, magnificent day.
Fernandes quickly assumed hero status at United - such has been his transformative effect - but this was only the fourth time our talismanic figurehead had played in front of a packed Old Trafford.
United's other summer signing Jadon Sancho was named on the bench having not featured at all in pre-season with Pogba stationed on the right, Dan James on the left and Greenwood up top in the absence of the unavailable Edinson Cavani.
The Reds stormed into the new season looking intent for a repeat of last term's pre-Christmas thumping in which Scott McTominay put Marcelo Bielsa's side to the sword with a brace inside the first three minutes. And, perhaps inevitably, it was he whom went closest early on with an early sighter, blocked by Robin Koch after 120 seconds.
Greenwood, leading the line in his favoured centre-forward position, was denied by Illan Meslier and then put Pascal Strujik under pressure, with the defender forced to only poke the ball against the striker in trying to clear, but Meslier was equal to the effort.
Pogba smashed into the side netting having been played through by Greenwood but David de Gea was then called into action at the other end. Leeds served notice of their sporadic threat as a trademark swift counter attack culminated in first Jack Harrison, and then Mateusz Klich, denied by the recalled Spaniard.
Rodrigo headed wide but United's first goal of the new season arrived on the half hour mark when the Reds seized on an errant clearance from Meslier and Pogba picked out Fernandes. The string-pulling Portuguese took the ball under his spell with a wonderful touch to pull it down and clip neatly over the advancing keeper, whom got a hand on the ball but was unable to keep it out.
The Reds went in at half-time but, with only a slender lead, certainly did not have an unassailable lead.
Indeed, perhaps inevitability, came a blow to the solar plexus as Ayling collected the ball, travelled with it and - still unmarked - released a rocket from 25 yards to leave the helpless De Gea with no chance.
Just when it seemed as though familiar failings would return to haunt the Reds again, the response was swift, brutal and brilliantly emphatic.
Only three minutes further on and United were ahead again as Pogba's defence splitting pass picked out Greenwood, he held off the struggling Strujik and drilled home a superb low finish beyond Meslier.

Leeds - and we - barely had time to draw breath before United, by now in the finest of fettles, came again.

Fernandes sat down Meslier and wrong-footed the defence in one movement before his goalbound effort looked to have been cleared by the stretching Ayling. However, referee Paul Tierney indicated goalline technology had signalled a goal and Old Trafford erupted again. Replays did, indeed, show the ball had crossed the line by a mile so it was the correct decision.
Still Solskjaer's men did not relent with Leeds now under siege and Old Trafford rocking with electricity and baying for blood.
The Reds were rampant now and Fernandes added his crowning glory with the pick of the bunch on the hour mark. Varane will replace Victor Lindelof in the United side but the Iceman and Swedish captain showed his ability on the ball and why Solskjaer still views him as a key part of his squad. Lindelof's superbly lofted, raking through ball fell perfectly for Fernandes to smash home on the volley inside the box with a brief VAR check unable to prevent the completion of his maiden treble.
Leeds had been battered and there was still time for Fred to join in the fun as he swept home our fifth from yet another Pogba pull-back, the Frenchman's fourth set up of the match.
But perhaps the biggest roar of the day came on 74 minutes when Sancho was handed a debut as he came on to replace Dan James with assist-king Pogba also given a breather in place of compatriot Anthony Martial.
We're Man United, we're top of the league!
Overall team performance: 9/10
United Faithful Man of the Match: Bruno Fernandes. Simply magnificent.
Posted by United Faithful at 15:42