Mason Greenwood's second half equaliser cancelled out a controversial Che Adams opener as United were held to a draw at St Mary's.

There looked to have been a clear foul on Bruno Fernandes in the build up as Jack Stephens wiped out the Portuguese and made no attempt to play the ball. The loose ball found its way on to Adams and he fired in with the aid of a deflection off Fred. Greenwood's well-taken goal ten minutes after the interval ultimately earned the Reds a point - in truth, probably a fair result.

In doing so, Ole Gunnar Solskjaer's side equalled Arsenal's record run of 27 away league games without defeat stretching back to January 2020 at Anfield but there will be a sense of frustration over a missed opportunity as United lost their way in the closing stages despite a strong response to Greenwood's equaliser.

Solskjaer made two changes from the opening day thumping of Leeds as Nemanja Matic and Anthony Martial were recalled to the XI in place of the not fit enough Scott McTominay and the rotated Dan James. New signings Jadon Sancho and Raphael Varane had to be content with a place on the bench as our new World Cup winner was involved in a squad for the first time - albeit a watching brief with Victor Lindelof's assured showing in the opener enough for the Swede to maintain his place.

In keeping with the atmospheric din from the returning fans on the south coast, Saints applied the early pressure through the familiar source of captain James Ward - Prowse. The set-piece specialist had scored in the corresponding fixture last season as Saints took a 2-0 lead, and went close again this time as his free-kick was tipped away by David de Gea. The same player fired into the side netting from the resultant corner.

Somehow, United failed to go in front moments later at the other end. It came from a similar set piece as Fernandes swung the ball in and found Lindelof. The centre-back stretched every sinew and flicked the ball towards goal and on to the bar. On the rebound, Martial headed goalwards but Southampton managed to clear their lines after a goalmouth scramble.

Alex McCarthy saved well to deny Paul Pogba from a set-piece and the same player then headed over the bar having been picked out by Luke Shaw on the left.
The impressive Mohamed Salisu nicked the ball off Fernandes on the edge of the box, but Southampton - controversially and fortuitously - took the lead on the half hour mark. Saints had created next to nothing from open play, until Stephens had scythed down Fernandes in the United half and moved the ball on to Adams. The Reds vociferous appeals fell on deaf ears - where was the VAR check? - and the Scott carried the ball forward and fired on goal. The strike reached its target as the ball took a deflection off Fred and beyond the stranded De Gea into the corner, but replays showed there was contact by Stephens on Fernandes.

Five minutes before the break, Ralph Hassenhuttl's side could have extended their advantage further had Adam Armstrong turned home a whipped delivery from eye-catching full back Valentino Livramento. Fortunately, the striker, on his home debut, was unable to get anything on the ball and the chance had gone.
McCarthy clung on to a Lindelof header in the final action of the first half as United, once again, would need to find their powers of recovery.

In keeping with much of the opening 45, the second half proved an end-to-end contest as De Gea saved from Armstrong's outside of the foot effort before United's leveller came.

It came through some wonderful build up from Pogba, as he exchanged passes with Fernandes and poked the ball through to Greenwood. The two had linked up to devastating effect against Leeds and were at it again here as Pogba's fifth assist of the season set up the teenager and he finished well beyond McCarthy from close range. The gunman doesn't miss those - it was his second of the season already and seemed to set United up to push for victory.

That belief was only enhanced as the Reds laid siege to Southampton's goal. Pogba flashed a shot wide having jinked through the defence, Greenwood nodded over the ball and McCarthy was called into action to keep out Fernandes. A United winner seemed only a matter of time with the introduction of Sancho but Saints, to their credit, fought back. 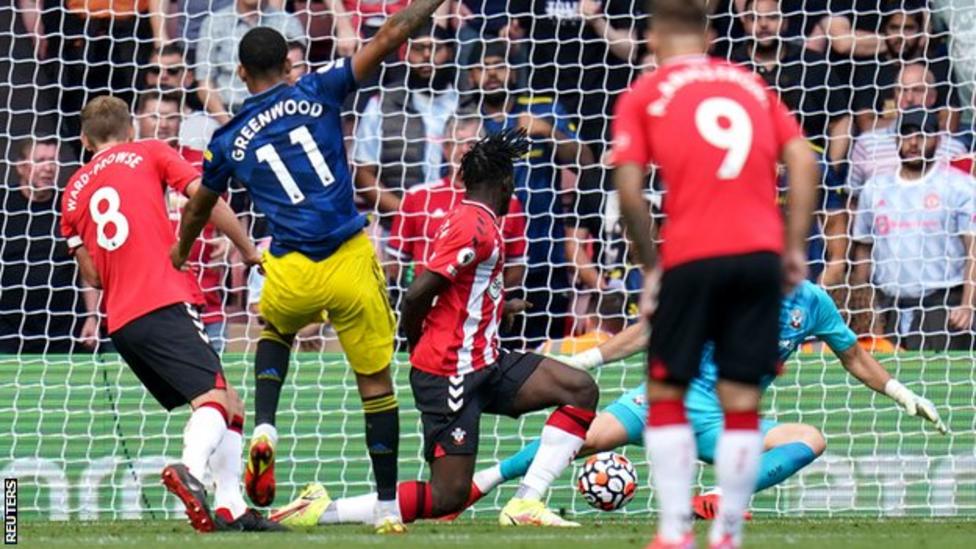 They could even have retaken the lead as De Gea twice sprung into action to preserve parity. The Spaniard saved superbly from Armstrong with the striker one-on-one, and then punched clear when another Ward - Prowse free-kick caused United's defence problems. Adams was unable to direct his header home when well placed with Southampton suddenly sensing victory.

But there was to be no late drama like last season here when Edinson Cavani - serenaded superbly and loudly throughout as his excellent new chant got an airing - scored an injury time winner.