Ch-ch-changes... the search for Manchester United's next manager

Heard the one about the Frenchman, the Spaniard, the Geordie and the Argentine?  It may sound like a punchline, but the question of who will - or should be - Manchester United's next manager is no laughing matter.

Michael Carrick may boast an impressive 100% record as the Reds caretaker boss following Tuesday night's 2-0 win over Villarreal, but United have their sights firmly set on another ex-Spurs man in Mauricio Pochettino.

Pochettino seemed almost certain to be the next man in the Old Trafford hotseat as talks accelerated quickly in the aftermath of Ole Gunnar Solskjaer's sacking. United even seemed prepared to make the unprecedented move of buying the Argentine out of his contract with PSG, which runs until the end of next season. For a board famously frugal with their finances, it spoke volumes over just how highly they rated the ex-Spurs manager.

So much so, they were willing to abandon their preferred strategy of appointing an interim until the summer - when we would then appoint a permanent boss -  in an effort to procure Pochettino immediately. This club acting quickly and decisively when it comes to doing anything - who ever would have thought..

The stars seemed to align for Poch to come to us. He wants us, we want him and he's our number one target with Zinedine Zidane ready to replace him in the French capital. The board have long been  admirers of the dapper Argentine and he has regularly been touted as a United manager-in-waiting.

The issue always seemed to be the timing. It's difficult to get a permanent manager in halfway through a season, especially with the main candidates already in work. United had their initial approach for Pochettino rebuffed with the French giants unwilling to even enter into talks at this stage.

It all means that, whilst Poch remains United's no.1 target with Ajax supremo Erik ten Hag as second choice, contractually, we may need to wait until 2022.

United are searching for a more experienced, short-term interim to carry us through until the end of the season if Pochettino cannot be enticed before then as now seems increasingly likely. 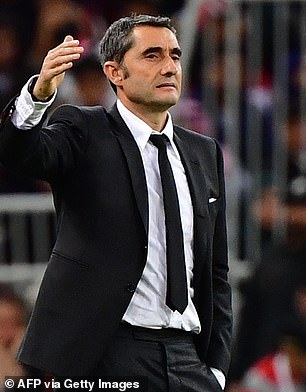 Five men have been considered for the role with United having held talks with ex-Barcelona boss Ernesto Valverde interviewed by United's director of football John Murtough, so too Frenchman Rudi Garcia and veteran Swiss manager Lucien Favre. None have ever managed in England before, but all three men have experience of top level football and all have won titles. Ralf Rangnick - the highly-rated German credited for inspiring illustrious compatriots Jurgen Klopp, Thomas Tuchel and Julien Nagelsmann - is also thought to be an option as is 48-year-old ex-Roma boss Paulo Fonseca.

Garcia in particular has an impressive record of revitalising ailing clubs, doing well with clubs that aren't. He took Marseille to a European final in 2018 and reached the semi-finals of the Champions League with unfancied Lyon in 2019-20, knocking out Juventus and Pep Guardiola's City en route.

Valverde was never widely popular at the Nou Camp but won two league titles and the Copa del Rey during his time in charge as well as three Greek Super Leagues with Olympiakos so not only would he steady the ship in the short term, he's a proven winner but also a modern coach and hasn't been out of work for long.

Just as long as its not Steve Bruce...