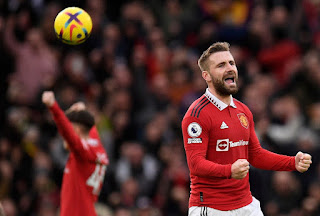 The Reds were humbled and battered at the Etihad but showed lessons have been learned since that day as United exacted revenge on our local rivals to move within a point of Pep Guardiola's side in the process.

Here is how we rated each Red in a stunning instalment of the 189th Manchester derby.

Had nothing to do as City only had one shot on target in 95 minutes - Jack Grealish's header for the opening goal. Nothing he could do to stop it and, although he would surely have expected to be a very busy goalkeeper, De Gea was a virtual spectator. His opposite number was by far the busier of the two stoppers.

What a turnaround for a man who looked done under Erik ten Hag. A masterful showing from a player reborn and even showed some close control dribbling to set up a United attack on the right wing with United chasing the game.

A constant, reassuring presence again at the heart of the defence. Tracked Erling Haaland when he dropped deep and won everything in the air as usual. Didn't put a foot wrong. Rolls Royce of a player.

Shaw has gone from an emergency, makeshift centre half to a genuine option for United. Rendered the best striker in the world anonymous and was cynical and combative when he had to be. A huge header to get us out late on.

I was worried about his battle with Riyad Mahrez but it was one the young Dutchman won comprehensively. United's left-hand side was dominant and Malacia was a big part of that. A complete reversal of his showing in the game at the Etihad.

Perhaps not quite as imperious as he has been with some wayward passing (by his standards) and could have perhaps done better for City's goal as he lost de Bruyne. But he was dogged and buzzed around to help United defend the lead.

Tasked with shackling de Bruyne and cutting the supply line to Haaland, Fred did his specific role superbly. A lot of us Reds were calling for his inclusion and it worked. Won his duel with the Belgian and whipped the crowd up after two big tackles on de Bruyne. Impressive commitment and proactive play in another excellent derby performance.

Pushed into the no.10 role, he was neat and tidy in the first half and linked play well. But United lost control in midfield after the break and the game passed him by.

Led by example and was at the heart of everything the Reds did. Perhaps should have scored in the first half but then did so - albeit in a contentious fashion - for the game-changing moment.

Overcame an injury concern as he came to life to effectively 'create' the equaliser before he kept his incredible run going with yet another winner. 16 now in the season of this player's life.

Held the ball up well and did link the play effectively but he was an injury doubt before the game and it showed. Came off at half-time and was very lackadaisical. Does Wout Weghorst start ahead of him now?

What a difference he made when he came on. United were losing their grip on the game and Garnacho helped to restore the equilibrium. Set up Rashford to send Old Trafford into delirium.

Came on late to help United see things out. No rating

Came on to help United see things out. No rating

Took a risk with his team selection but it worked yet again. What a man and what a manager.