Arsene Wenger: Our tribute to a managerial great 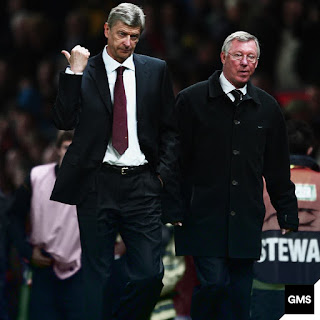 It's the end of an era, not just for our, ahem, friends from the red half of north London, but also for the Premier League and English football as a whole. Arsene Wenger - Le Proffeseur - Arsenal's iconic figurehead for more than two decades, is finally hanging up his jacket at the end of the season. You may be wondering why we, a Manchester United blog, have broken from tradition and written a piece on one of our rivals - especially a rival that were our most hated adversary in the late 90s and early 00s. I may be a United fan first and foremost, but I'm also a lover of the sport of football itself and it's only right that Wenger - a pioneering visionary who changed the face of the English game - gets the recognition he richly deserves from friend and foe alike.
The fact is, he's second to only our very own Sir Alex Ferguson when it comes to the question of the greatest manager to grace the Premier League era. Before City and Chelsea rode into the limelight with their mega - rich sugar daddies, Arsenal and United were the dominant forces in the country, often inextricably intertwined in a long and gruelling struggle for supremacy. Arsenal at their peak made United better, and vice - versa.

Wenger's Arsenal sides proved the most challenging and formidable obstacle to SAF's Old Trafford dynasty - a dynasty that Wenger himself derailed, albeit briefly, with the Invincible season in 2003-04. The rivalry was strong and deep - rooted, a compelling clash of the titans fuelled by two men who rarely saw eye to eye - two heavyweight managerial maestros whose utmost priority was on getting the better of each other. With all this is mind, was it any surprise that the bitter feuding - a fierce hatred encapsulated between captain Keano and opposite number Patrick Vieira - often spilled over into what quite literally became an hyper - aggressive war of attrition. The Battle of Old Trafford, preceded by that infamous tie when Martin Keown's unprovoked attack on Ruud van Nistelrooy sparked a mass melee, outrage and record fines - I miss those days. It's certainly now a duopoly that has dissipated over time - to the point where there's almost respect between the two. Liverpool and City may still be our two biggest games of the season, but they just don't make them like that any more. It was a gripping rivalry that was the best in the Premier League and one that will never be bettered.
At their peak, Wenger's Arsenal were always the opponents you feared the most. It look us a long while to live down Sylvan Wiltord's winner at the Stretford End that sealed the title for them in 2002. That triumph formed part of the Gunners "double double" - winning the league and FA Cup at our expense - in 1998 and then again four years later. Despite the fact European glory eluded the Frenchman, he put together some of the finest teams the Premier League has seen - superb, swashbuckling sides that gave the best United had to offer a run for their money - like Fergie, teams built on passion, skill and unstinting determination. He created a legacy to last a lifetime and I wish him nothing but the best for the future (apart from when we play them next Sunday).

Oh, and Monsieur Wenger, we owe you a big thank you... for selling RvP to us and bringing title number 20 to Old Trafford back in 2013. Oh, and for THAT 8-2, and for when we beat you 2-0 in the cup with seven defenders on the team - sheet. Those were the days.. Au revoir, Arsene!