United march on after a pyrrhic late victory

United's lengthy European journey continued into the semi-finals thanks to Marcus Rashford on a night of fluctuating fortunes at Old Trafford.

This was a quarter-final that put United fans through the entire gamut of emotions - from the joy of Mikki's opener, the nerves of Anderlecht's equaliser and counter-attacking prowess -  to  the worry of a double injury blow.

After United had somehow contrived to miss a season's worth of chances in 90 tension-filled minutes, then came the outpouring of relief that followed Rashford's extra time clincher.

Rashford, Zlatan Ibrahimovic and Paul Pogba had all been guilty of a succession of glaring misses as the flaw that has undermined United's season reared its ugly head once more to leave Anderlecht in contention throughout.

As on so many occasions this season, United created multiple chances only to squander the opportunities and leave themselves vulnerable to a sucker-punch.

The tie should have been put to be long before an additional 30 minutes were needed but United were rescued from the threat of a dreaded penalty shootout by Rashford's wonderful winner.

The Reds were their own worst enemies with a shocking display of finishing but the victory - although probably deserved - came at a cost.

Already without centre-backs Chris Smalling and Phil Jones through injury, Jose's defensive resources were stretched further when Marcos Rojo was forced off.

The centre-back suffered a nasty looking injury in a 23rd-minute collision, but the biggest concern surrounds talismanic striker Ibrahimovic.

The Swede had endured a nightmare evening before he landed heavily on his knee under a high challenge in the dying moments of normal time.

Rashford delivered against Chelsea and again here as he offered United's attack the pace, penetration and movement that the Swede does not.
However, after his 28 goals this season the loss of Ibrahimovic would still be a major blow and - with the final to be played in his homeland - it would be a cruel twist of fate should he miss out.

With the fight for a top four finish so tight, and so in the balance, this is a competition that has acquired crucial status for us.
With daunting trips to City, Spurs and Arsenal to come during the run-in, the Europa League provides a welcome safety net.

This was a vital victory for Jose and the team, but it may yet be victory at a heavy price. 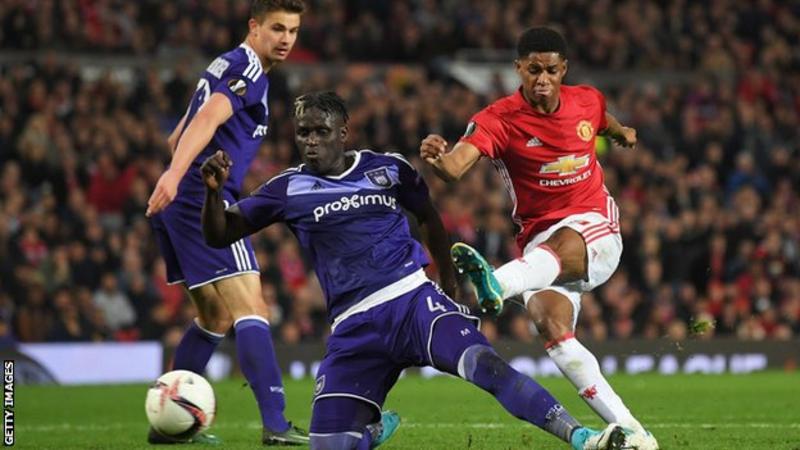