How the Munich Air Disaster shaped United and redefined our history

6 February, a date synonymous as the darkest day in the history of this great club. It's a day that represents everything we stand for as a club and one that changed Manchester United forever. Before the Munich Air Disaster, United were just like any other club. After it, we became a club loved and respected the world over and turned into the global institution that we are today. We may all wish to remember the trophies, the triumphs, the silverware and the iconic figureheads that make this club so special, but we must never forget Munich. The air crash marks an indelible chapter of the Manchester United story as much as anything that has happened before or since. 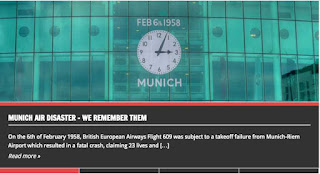 The story of the tragic events that unfolded 60 years ago today on a snowy, slush-covered runway in Munich - and the outpouring of grief and anguish that followed it - is a tale that has been told throughout the world. Matt Busby's swashbuckling and pioneering young side - widely regarded as the finest squad of players English football had ever seen - were cut down in their prime. Eight players, friends, local lads from Manchester and the surrounding area, would never return home from Belgrade. A remarkable team was no more.

Yet, somehow, against all the odds and in the face of adversity that seemed impossible, United showed the strength, the courage and an unbreakable spirit that to this day remain at our very core to recover from the tragedy that struck them - qualities echoed by the extraordinary determination of Busby, who was severly injured in the crash and twice received the last rites. Despite his crippling injuries, Matt - together with his lion hearted assistant Jimmy Murphy - rebuilt United from a shattered club that was on its knees and put together another great side. Ten years on from the tragedy, the Reds conquered Europe in the very competition the Babes would most likely have gone on to win had fate not cruelly intervened. Three of the survivors of that horrific night played at Wembley, captain Bobby Charlton (one of only two remaining survivors), Bill Foulkes and Shay Brennan - who was not present on the fateful flight.
As well as the eight players killed, the crash also took the lives of three members of club staff,  eight journalists,  the co-pilot, a cabin steward, and two United supporters who had travelled with the club - 23 victims in total.

It's been a poignant week at Old Trafford, particularly so today on the anniverary, as we come together to remember the Flowers of Manchester: a truly unique and pioneering group of players who took United into Europe and swept all before them to become the dominant footballing force of the 50s. Their careers and lives may have been ended too soon, but those Flowers produced seeds that later were to bloom. One of the great legacies of Sir Matt's management at this club was an emphasis in youth - a belief in young, homegrown talent that played attacking, entertaining football that won trophies. It's one of the many characteristics that are still in evidence to this day. Today, all those who died were remembered, both at Old Trafford and at the crash site in Munich. The first team squad, Under 23s and some of the youth players were in attendance. To add to the poignancy, United's academy team will play in Belgrade tomorrow against Brodarac.

The Busby Babes set a benchmark and pioneered an ethos that is still important to us today, a legacy that will forever be ingrained in the United DNA, and one for others to follow.  Many believe we would not be what we are today if the Babes had not been what they were in their time.

They shaped United as a club and redefined our history. None of them will ever be forgotten.

In the cold snow of Munich they laid down their lives
But they live on forever in our hearts and our minds
So come all supporters and hold your heads high
For Manchester United will never die.