On a sweaty, heavy, oddly gruelling afternoon at Wembley, United's sweaty, heavy, oddly gruelling season finally spluttered and juddered to a halt. It has been a campaign of progress in many ways, with obvious improvement in the league. But it passed here without the silver lining of a trophy as Eden Hazard's first half penalty settled a largely forgettable cup final in favour of Chelsea.
From Anfield to St James Park, from Andalusia to Ashton Gate, United's season has been a leaden-legged mish mash, with a sense throughout of clogged energy, of expensive cogs that don't click together, of results wrung out through sheer bloody-mindedness and force of will. 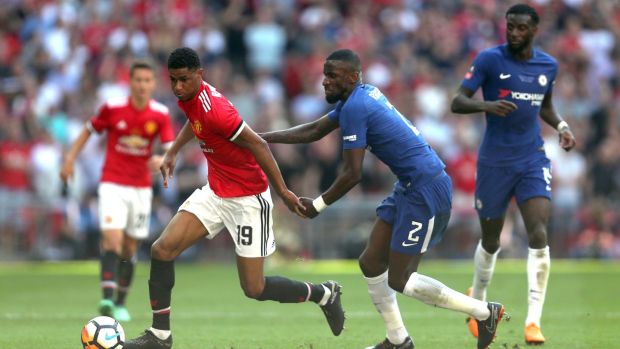 If a player embodies this incohesive jumble, it's the frantic and often forlon figure of Marcus Rashford - a player whose megawatt glow has dimmed, flickered and burned out as flaws and a startling lack of confidence have slowly ebbed away at the golden game of one of England's genuine 24-carat talents. Publicly criticised - rightly or wrongly - by his boss after a dreadful performance at Brighton two weeks ago, Rashford was given the chance to redeem himself up top at Wembley in place of the injured Romelu Lukaku. This was a wonderful opportunity for Rashford to play as a starting centre-forward in a season-defining tie.  It was a chance that he did not take - isolated and marshalled superbly by Chelsea's experienced defence - he failed to make any meaningful impact in a game in which United needed him most. Rashford is still only 20 and in the middle of one those seasons that any young player is allowed to have. The wider issue is the sense of a player drifting into a dead-end where he seems unsure of not just his role but of his own ability. He clearly has talent and willing but there's something missing - there has simply been no development, just an underwhelming sense that Rashford is not the ready-made centre forward he's being asked to be. It seemed that Jose Mourinho wanted Rashford to be the Lukaku-lite battering ram centre-forward that Jose so craves in the absence of the injured Belgian. This is a player who thrives on penetrative though - balls in behind the defence, not crosses into the box. He never had a prayer. Either way, Rashford looks more like an over-promoted Academy graduate than when he actually was one.
Certainly it is clearer than ever how important Lukaku is to Jose's United. Second balls, holding the ball up, bouncing off defenders, providing physicality and fighting for scraps: that's the job now. Here, Rashford seemed to be playing through a fog: blunt when sharpness was needed, a player making the right runs at the wrong moment. He seems bereft of everything that made him the overnight sensation that catapulted him into the national spotlight as the finest young forward United have had for many a year. Bereft of confidence, touch and that refreshing vigour, belief and fearlessness he brought when he first broke through. He was hauled off before the end of the final with the team chasing the game - he looked dispirited, beaten and deserved to be subbed. In a tricky time for the club, Rashford was a local lad who brought renewed pride in our ability to nurture youth.

Now he looks a forlorn figure at odds with himself - and the concern for United (and England, with a World Cup looming), is that he's simply failed to flourish and develop.