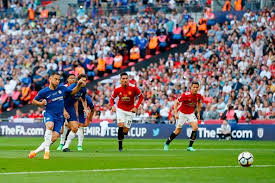 This was a Jose Mourinho masterpiece: nick an early goal, play on the counter, sit deep and squeeze the life out of the opponents to get the job done and take home the prize. Not pretty but effective - the tactic he has made a career of. Only this time, unpalatably, he and the team were on the receiving end. This time it was Antonio Conte - Jose's opposite number and arch-rival who executed a Jose-esque tactical blueprint to perfection. This result is unlikely to save the Italian from the sack after a disappointing season but in what looks set to be his final game in charge of the Stamford Bridge side, he "Out-Mourinho'd" Mourinho. It's true that they did indeed "park the bus", but it's also true that we can't complain at Chelsea doing so, as we'd undoubtedly have done the same had we gone ahead in the first half. Chelsea's game management was bang on point, they did what they had to do and did it well - the Blues defended manfully, stood strong and were very well organised and disciplined so fair play to them. They got over the line and that's all that matters in a final - they've got the cup and we haven't. End of story.

Can someone please explain to me, why, in the name of our good Lord, it took our players so long to wake up to the fact that this was a cup final. The team started the final with all the pace and intensity of a testimonial - slow and sluggish -  and again, as we've seen so many times this season, only got going when 0-1 down and chasing the game in the latter stages. The team played out of their skins in the second half and showed superb fighting spirit in an - ultimately futile - attempt to turn the tide. It was a brave if belated rally and we couldn't have given more, but I'm sure I can't be the only one scratching my head and wondering why we never start games in this way. It's been like this all season long and begs the question of what might have happened had we hit top form in both halves of matches - most of the high points came from one superb 45-minute spell.
Only when we're behind do the real Manchester United come to the party and even then, you feel that sometimes we're playing purely on survival instinct rather than any clear clarity of instruction. Reactive and strangulating football remains Mourinho's modern raison d'etre.
On some occasions you can get away with it but not here - not against a streetwise Chelsea side with a manager who thrives on the no-frills tactic of the classic Italian catenaccio. In some ways it was fitting that our season should end in a manner that has epitomised much of it - a typical game of two halves for this Jekyll and Hyde United side. Pedestrian and ponderous for much of the first half, United were off the pace and distinctly second best against a Chelsea side who looked sharper, stronger and more 'up for it'. The second half, however, showed flashes of the brilliance and character that proved the catalyst in those epic climb-off the-canvas victories at Crystal Palace and in the derby at the Etihad. It was the latest in a number of performances that have left us scratching our heads at the transformation in our team from one half to the next. One that leaves us wondering why we can't play like that in every game from the get-go. This time, we left ourselves with too much to do. One mistake cost us and we fell short.
United may have ended the league season with a whimper, but certainly can't be accused of doing that here. Resurgent and rejuvenated, the players gave it absolutely everything after half-time and fully deserved to force extra-time. Such was our dominance, if we had done so there was surely only ever going to be one winner. That, in many ways, summed up this final: what if. What if Paul Pogba's late header had nestled into the corner instead of flying agonisingly wide, what if Alexis Sanchez had not strayed marginally offside when he turned home Chris Smalling's second half header. What if Romelu Lukaku had started ahead of Marcus Rashford. What if Phil Jones had managed to avoid tangling with Eden Hazard in the 22nd minute. Ifs, buts, maybes... the story of the final and of our season.