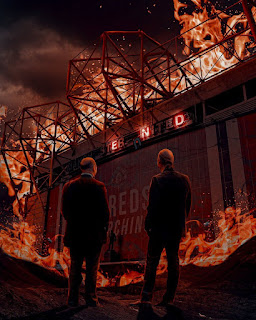 How can something that seems so shocking become so expected at the same time? How many times can you be proved wrong when you joke things cannot get any worse?
What else is there to say when you get so used to disappointment you become detached and distant towards such a huge part of your life?

I cannot answer any of this, but I'll certainly try. I will do so with more effort and energy than our players. Anyone who knows me will tell you I'm an amiable sort of person - I rarely rant, or get riled. I don't go looking for controversy or toxic negativity.
I always try and look for the positives in any given situation, no matter how bleak that situation may seem. But so dark are the times at our beloved Manchester United, there is nothing to be positive about.

We looked good and enjoyable to watch but, once again, this team have crumbled when results matter, when the pressure is on. It has been yet another false dawn.

From all walks of life, from all over the world, those in Red come in their droves to support their beloved club - our beloved club. For some, it may be a rite of passage passed down from one generation to the next. For some, it may be a once in a lifetime experience whilst for others merely a backdrop to the bigger picture - the backdrop to the biggest fight of our lives. The fight for our club's future in protests against the parasitic leeches in the corridors of power.

Where's the same pride in these players? That same fight, that never say die, never give up attitude which used to be synonymous with this once great club? Apologies and excuses simply do not cut it any more.

The ignominy of a home defeat in the season opener surely should have sparked something somewhere inside as we headed to Brentford. Yet just when we thought we could sink no lower, these players proved us wrong again. Another example of how to go from bad to worse. United are no strangers to breaking records by the week, only this time they are ones no-one wants to break.

A 4-0 defeat with inexplicable, schoolboy errors from a team of professional footballers as all the while new manager Erik ten Hag looked on with the same expression of all who came before him.

The last time we were in this position, I was one. 30 years ago. Three whole decades. Speaking of which, it is now ten years since we last won the Premier League.

You don't need me to tell you what the problems are on the pitch. I don't have all year and there are too many to mention. The same areas need improvement. But now the problem goes further than that. It's more than simply spending money on players we need as you can only wonder who on earth would want to join us anyway? Which player in his right mind would actively wish to become embroiled in this almighty mess.

So where does all of this leave us? In despair. Broken. With dejected players, fans divided, still in an ever increasing mountain of debt the Glazers lumbered us with on that fateful day they took hold of the reigns. Taking money out the club whilst our once proud, iconic, best-in-class stadium crumbles before our very eyes. Of course, there are the promises to renovate and improve, but I trust these leeches as much as I trust Rishi Sunak as PM. Whatever happens, they will do so in a way which benefits them and not us.

A fish rots from the head down. From top to bottom, the club I fell in love with as a young, impressionable, wide-eyed six year old is in disarray. Manchester United have finally broken me, finally brought me to my knees.

To all those celebrating our downfall, remember: nothing is permanent. Football is cyclical, all things come to an end. Nothing will ever change the fact I've seen my team achieve what most others can only dream of. Even now, in our darkest hour, we are spoken about obsessively. I'm not sure how long it will be, or when it will happen, but Manchester United will rise again. Of that I'm certain.

Of course, we have no divine right to win anything. We're not even asking for that. We don't demand a team that wins. We demand a team that tries. To give it our all and try to do it all again. I don't think that's too much to ask. If I hadn't seen such riches....

Players, managers and - yes- eventually the owners will come and go. But the fans? We are the one constant, the lifeblood, the unstinting presence to rise above adversity and never stop singing. Never stop believing. How we stand tall. How we fight. How our away support remains the greatest in the land. How we laugh through the pain. And how, even in the predicament we find ourselves in, somewhere deep inside, in the depths of our being, there is that element of hope. Our loyalty and passion knows no bounds.

Manchester United. For the good and the bad. Until the end of time. Always and forever.

We want our club back.