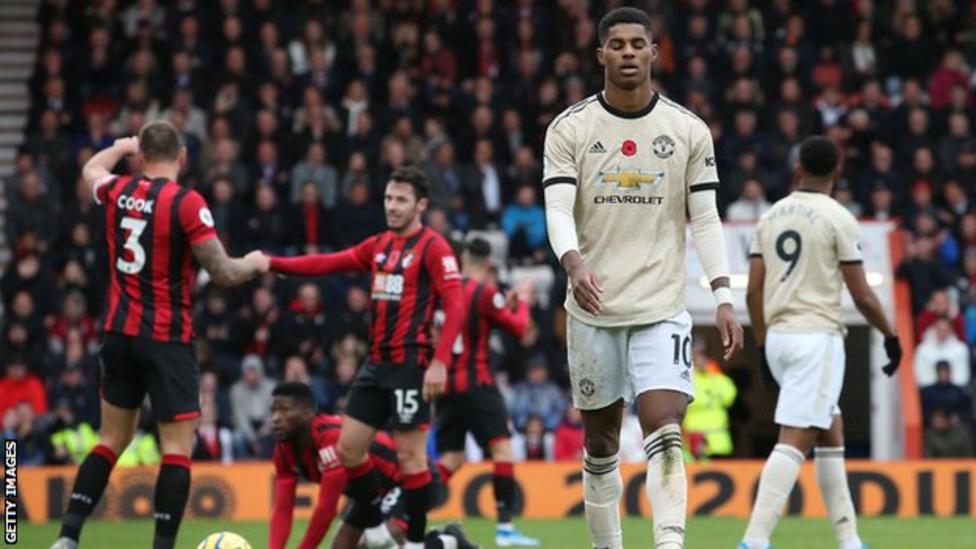 United made a positive start after going four unbeaten but their new-found belief seemed to evaporate in driving rain and swirling wind on the south coast. King, who scored the winner in Bournemouth's only other win over United in 2015, was allowed to chest down Adam Smith's cross into the box before he spun Aaron Wan-Bissaka and volleyed between David de Gea's legs from close range.
Out of form Bournemouth carried that momentum into the second half and Harry Wilson twice went close to doubling their lead, before late substitute Mason Greenwood hit the post moments after coming on for United.
But the visitors could not prevent Bournemouth securing their first win in six, which saw Eddie Howe's men leapfrog us and move up to seventh.
Daniel James was again United's biggest threat, with the Welshman at the heart of his side's best moments. He found Andreas Pereira - who fired wide - and compatriot Fred then dragged a shot wastefully off target when well placed.
James then won a free-kick which saw him go close from 20 yards, and as United struggled to maintain that early dominance, King pounced.

The 27-year-old striker was left unmarked before Wan-Bissaka committed himself, allowing the Norway international to control the ball on his chest, flick it over his head and hammer past De Gea.
The Spanish keeper kept United in it with a string of saves after the break, notably from Ryan Fraser and Jefferson Lerma, before Solskjaer made a double substitution, bringing on Greenwood and Brandon Williams with 10 minutes left.
Greenwood volleyed Fred's cross against the woodwork at the back post before Scott McTominay and Fred tested home keeper Aaron Ramsdale from outside the box, but those chances came more through desperation than design.

At the other end,  Liverpool loanee Harry Wilson had the Cherries' first shot, which was deflected wide, before a Bournemouth break saw the again impressive Fraser shoot straight at De Gea.
Yet the Cherries seldom managed to get behind the visitors' defence until Harry Wilson and Fraser combined to find Smith in the right side of United's box. The full-back lifted the ball towards King, who showed great composure to convert his fourth goal of the season.

De Gea saved well from Fraser and both Wilsons before Solskjaer's side mounted a late assault on the Cherries goal. Aaron Ramsdale parried out a shot from Pereira, Marcus Rashford was thwarted by a Steve Cook tackle at the last and Greenwood, who had just come on, struck a post.