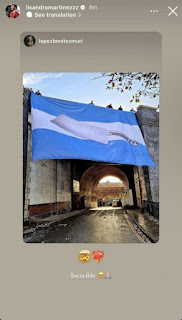 Ahead of United's match against West Ham at the weekend, the Red Army were pictured in Manchester with a banner which had no words but said it all.
Emblazoned with the light blue and white of Argentina and a butcher's knife positioned in the middle, the flag paid homage to Lisandro Martinez - United's new recruit who has become a cult hero at Old Trafford almost overnight. I can't remember a player becoming so popular so quickly.
Nicknamed 'The Butcher of Amsterdam' during his spell in the Netherlands with the Dutch giants of Ajax, Martinez has only been in Manchester for three months but has already captured our hearts thanks to his passionate, no nonsense, determined and aggressive performances at the heart of defence.
Martinez has been outstanding, a revelation, and the early favourite for United's Player of the Year award since his move from Ajax in the summer to become one of the finest exponents of his craft in the English game. Name me a better centre back in the Premier League right now? I'll wait.

Erik ten Hag wanted to sign characters as well as quality, and in Martinez he has both. Martinez - small in size but mighty in stature - is the type of personality a disparate dressing room desperately needed but he's also delivered on the pitch in a position which we needed to strengthen.

There were doubts about Martinez's height, despite the fact World Cup winning Fabio Cannavaro, one of the best centre backs of all time, also stands at 5ft 9. The great Italian proved whilst height is a useful attribute for a defender, it is not a pre-requisite for defensive prowess par excellence. Even before his United debut against Brighton on the opening day, the barrage of questions and criticism from pundits and rival fans alike had written Martinez off as a failure even before he'd begun. Yet Martinez has responded in spectacular style to leave those naysayers in the dust with lots of eggs on lots of faces.

Whilst it is too early to say he has been a 'successful' signing (you need to give him a least a season before passing judgement), he has already made a major impact during his time at the club and ten Hag could do with more players like him in the future. He reminds me a bit of Nemanja Vidic for his aggression, passion and willingness to stick his head in where it hurts.

Martinez is a brilliant one one one defender, his ability to read the game is top class and he's genuinely world class when it comes to his ball carrying and distribution from the back.
He's effectively a midfielder playing at the heart of the defence, he brings us something different and we've not had a centre-back this good on the ball since the days of Rio Ferdinand. His dynamic range of passing and ability to break the lines from deep in orchestrating attacks has been integral to ten Hag's possession-based, high-pressing style and have added a different dimension to an evolving and improving United side.

All this and you can see why Graeme Souness's comments this week were simply baffling and make no sense. Instead of admitting he was wrong and giving credit where it's due, oh no we can't do that now can we, as he's been told to be controversial and make comments surely even he does not believe. Souness was one of the pundits who was very quick to write Martinez off when he said someone under 6ft could not hope to do well in the physically demanding environment of the English top flight. Martinez has made him look like a right prat in that regard (which admittedly isn't hard to do) but, remarkably, it was not the worst of what he said. 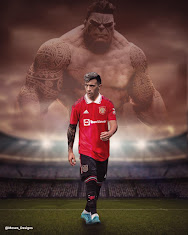 Souness suggested Martinez has done little to prove him wrong and apparently he isn't "very good on the ball." Has Souness even watched Martinez and United this season at all? Does Graeme Souness have a pair of eyes? Of course he's entitled to his opinion, but he really should read, watch and think before he speaks nonsense in front of millions on national radio. The man hasn't got a Scooby. Pundits are paid very handsomely to inform, to educate, and to do even basic research to justify the position they are in. It makes you wonder whether Souness was told to say it just to give his particular media platform views and clicks, as surely even he cannot be that ill-informed. Having a different view is fine, but not when it's completely ridiculous and he's only said it to justify himself. Pinging a 60-yard diagonal pass from centre-back to the right wing isn't good on the ball apparently.

It makes you wonder whether he was told to say exactly the opposite of everyone else. Martinez is absolutely elite with the ball at his feet - his passing and his distribution is his best asset so what more does Souness want? He simply cannot have watched him play for us or, if he has, has been watching something completely at odds with the rest of us. Even Stevie Wonder can see our no.6 is one of the best ball playing centre backs in the land.

Souness needs to do better, apologise to Martinez, admit he was wrong and give credit where it is due for once. If he is the best the UK has to offer, then the punditry industry is in a far worse state than
I thought.