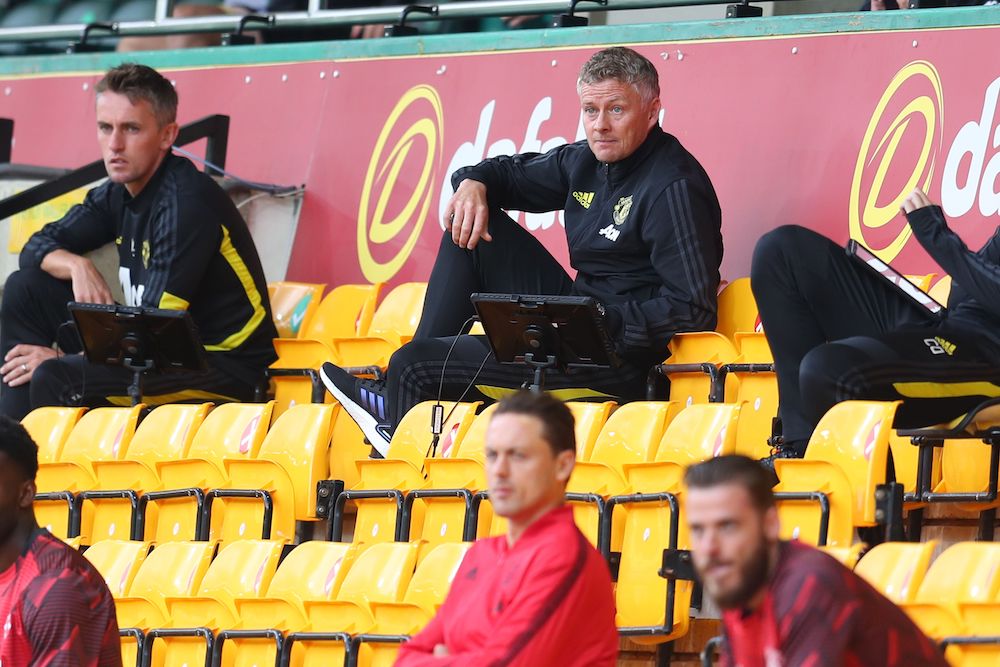 United's frantic schedule continues apace as Ole Gunnar Solskjaer's men travel to Brighton for our longest away trip of the season.
A mere 72 hours after the dramatic FA Cup win over Norwich - Harry Maguire deep into extra-time sending the Reds into the last four - attentions turn to the tense and protracted battle for a top four Premier League place.
The Reds have been in majestic form since the coronavirus restart, collecting four points from two games as well as that tougher-than-expected win in east Anglia.

There have been five Premier League fixtures between United and the Seagulls of Brighton, with the home side winning on each occasion
. United comfortably clipped the Seagulls wings at Old Trafford earlier in the season but we have been beaten on both previous visits to Brighton's new (ish) ground.
The Amex has been a bedrock for Brighton's continued presence as a top flight club and United have twice proved their biggest scalp, with Chris Hughton recording back-to-back wins over his illustrious counterpart Jose Mourinho, 0-1 and 2-3.

Both teams have new managers this time around though, with Graham Potter have taken over on the south coast in the summer and instantly set about instilling a revolution. Although Brighton have still found themselves at the wrong end of the table, Potter's pass and move style is a considerable upgrade on the pragmatic, defensive-first mantra of his safe pair of hands predecessor. Albion, like United - 14 games unbeaten - have picked up four points from two games since the restart - with a famous win over Arsenal and a creditable point at faltering Leicester - to ease any lingering fears of relegation.
That said, Potter's men are not quite safe yet in fifteenth place, six points above third from bottom Bournemouth, co-incidentally United's next opponents.

United continue to put the pressure on Leicester and Chelsea, well placed to capitalise on any potential slip up from those two sides, six and five points behind respectively and with high-flying Wolves also putting the cat amongst the proverbial pigeons.

Solskjaer made eight changes to his XI for that FA Cup quarter final at Norwich, with only Maguire, Luke Shaw and Bruno Fernandes keeping their places from the corresponding 3-0 win against Sheffield United.
Brandon Williams, Mason Greenwood, Paul Pogba, Marcus Rashford, Nemanja Matic and Anthony Martial were all introduced from the bench as Ole became the first manager to make six changes in a competitive match.
The United boss has a full squad to pick from, with all of those involved at Carrow Road available for selection as we look to end our south coast hoodoo and claim that elusive first ever victory at the Amex Stadium. Given the tight turnaround, Solskjaer will shuffle his pack again with Rashford, Martial and Pogba all expected to come back in from the start. Phil Jones and Axel Tuanzebe are the only absentees.

Adam Webster is an injury doubt for Potter's men and Jose Izquierdo is still sidelined, but Tariq Lamptey could keep his place after a strong showing on his debut at right-back in the 0-0 draw at Leicester. Brighton have no other injury concerns.

On the team's run to the Cup semi finals, Solskjaer said: "We're delighted to be in the semis, and at the prospect of going to a final.
"At Wembley, against a team we've played so often over the last 18 months, we're looking forward to it. We seem to play Chelsea every other weekend, so we know them well and its a game that is very exciting.'
On Brighton, the boss added: "They're a good footballing side, they play football and make it hard for you. I haven't been down there myself, so it will be a new experience for me. Their fans are brilliant and of course they matter and have an impact. For us to get out of this lockdown period and get fans back into stadiums is a day that will be fantastic. Sometimes as an away team it can help you without the home fans, without that twelfth man, but then sometimes the pressure of the crowd can get to you, or give you an extra edge.
"We just need to go one game at a time and not think too far ahead, there are many teams in the battle for third and fourth and it will go down to the last game."

United's trip to the Amex Stadium is a free to air game in the UK and kick off is at 8.15pm.