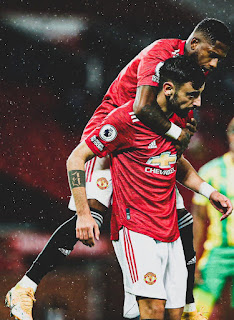 Manchester United produced their best performance of the Erik ten Hag era with a swashbuckling display of dominance over an out-of-sorts Spurs.

Indeed, this was the Reds best performance in years with the only disappointment to be had in the closer-than-it-seems scoreline. 2-0 was hugely flattering for the Reds north London rivals, with only a goalkeeping clinic from Hugo Lloris preventing an absolute landslide. Fred got the ball rolling with a deflected effort 76 seconds after half-time, and Bruno Fernandes capped a superb individual performance with a stunning goal on 69 minutes.

ten Hag made one change from the goalless stalemate with Newcastle as Marcus Rashford came in up front ahead of Cristiano Ronaldo, who later walked down the tunnel and out of the stadium before the end of the game having not been brought off the bench.

United had played well in big home wins over fellow top six sides Liverpool and Arsenal, but this was complete domination on a scale not seen for many a year. From the off, the Reds tore into third-placed Tottenham with energy, intensity and verve. Captain Fernandes set the tone by cleverly finding pockets of space between Spurs defensive trio. Antony and Diogo Dalot went close with speculative efforts, before Rodrigo Betancur flashed a shot wide of David de Gea's goal.

Antony curled a brilliant effort off a post and Lloris saved superbly from Marcus Rashford. The Frenchman then worked overtime to deny Fernandes from a free-kick before he tipped over a dipping Luke Shaw volley.

United racked up an incredible 14 shots inside a frantic 30 minutes as the Reds laid siege to the Tottenham goal. Lloris kept out another Rashford effort and Antony delighted the Old Trafford crowd with a sumptuous piece of skill which left his two closest pursuers flailing at thin air.

England captain Harry Kane was rendered virtually anonymous but did serve notice of his threat when he fired a 20-yarder straight at de Gea after a rare Spurs counter.

The only thing missing from United's first half showing was a goal but the deserved breakthrough was not long in coming. All of United's endeavours were rewarded barely a minute after the restart. Nineteen attempts at breaking down the Spurs door before half-time, but just one nudge in the second.

Fred's willingness to get into a shooting position paid dividends as he collected Jadon Sancho's pass on the edge of the box and fired on goal. He got a bit of luck as his strike deflected off Ben Davies to trickle beyond the stranded Lloris and in, but the Reds had deserved it for their utter superiority.

Yet still there was no let up to the Reds onslaught. Rashford thumped a shot in at the Stretford End, only for the busy Lloris to again thwart the England man with a smart low save. Fred fired wide and Casemiro lashed narrowly off target with a shot from distance.

United's relentless press forced Spurs deeper and into mistakes, as Rashford, Fred and Fernandes continued to stifle the visitors desperate attempts to play out from the back.

Kane - marshalled magnificently by Lisandro Martinez - began to drop deep in an effort to influence his side's play. He saw little of the ball but found himself in a good position one on one with de Gea. Our Spanish stopper made a good reactive save, but the flag was up and referee Simon Hooper waved play on.

It proved pivotal as United surged up the pitch and put the result beyond any lingering doubt with a goal of the season contender. Fernandes finally got the finish his brilliant performance deserved as he curled superbly beyond Lloris on the edge of the box after a fluid and flowing six-man move.

Rashford's drive was slapped away by Lloris before he was involved in what looked to be a brilliant third as he played in Fernandes to dummy the keeper and slot home - only to be denied by the offside flag.

United had time to bring on Christian Eriksen shortly before full-time as the Dane returned from a period of illness.

That. perhaps more than anything, summed up a terrific performance from everyone as United moved to within a point of the top four ahead of another difficult game at Chelsea on Saturday.