Players and fans do the club proud on momentous derby day

United had been clinging to a fragile, slender and nerve-shredding lead when Scott McTominay seized on Ederson's under-hit throw out to steer the ball into an empty Stretford End net. 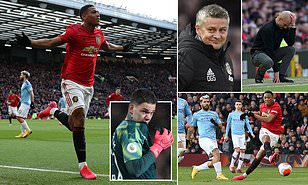 The delicious footnote of one of our own, a lad with United in his blood, sealing the deal was perhaps the best moment of all. McTominay had been at the club since he was five and as he wheeled away in celebration, you could see how much it meant. As the heavens opened and the rain lashed down, City - strangely toothless and subdued - simply wilted in the face of a United performance for the ages. Pep Guardiola's side monopolised possession but passed their way into predictability. City frequently ran into a Red wall and just could not break through as United - marshalled by the colossal Harry Maguire - played like they'd rather die from coronavirus than lose this derby. The Reds were heroic to a man and unstinting in victory. City may have had almost 80% of the ball - but it's what you do with it that matters.  We showed greater resilience and had the better chances. Make no mistake, this was a fully deserved victory. The boys were like men possessed and fought like lions. McTominay's 35 yarder was the cherry on top of the icing on the cake. United look a world away from the depths of despair that engulfed every orifice of Old Trafford only a few weeks ago. Every player looks a yard sharper, a yard quicker, a yard stronger. The team look fitter and so many players have improved their game beyond all recognition - Fred, Nemanja Matic, McSauce, Anthony Martial, Marcus Rashford, Victor Lindelof and Luke Shaw to name but seven.

The three points were vital in our quest to reel in Chelsea, who had looked good in their 4-0 defeat of Everton, but it felt like a whole lot more than that. This was about sending a statement, about pride and honour and playing for the badge on the front of the iconic red jersey. It was a win that not even Solskjaer's biggest critic can dismiss as overwhelming evidence that this side is growing and something special is building here. The clouds that seemed to have taken permanent residence in M16 have lifted and, for now, rolled away. We must go on and beat Jose Mourinho's Tottenham next week now.

Old Trafford erupted with the stadium rocking to the beat of a first Manchester derby double in the league for more than a decade. The jubilant scenes - the best the 110-year old arena had seen for years - and the sound of his name reverberating to the rafters, will have been music to the ears of Manchester United manager Ole Gunnar Solskjaer. The much-maligned, often derided Norwegian, had tactically outmanoeuvred Pep Guardiola for a third time this season - becoming only the second manager ever to record a hat-trick of wins over the Catalan in the same campaign (Jurgen Klopp is the other) - not bad for a "PE teacher."  That takes some doing. Again, Solskjaer and his cohorts in the dugout came up with a tactically perfect game plan that Guardiola simply could not figure out. As at the Etihad in December, it left the City manager befuddled and even he, one of the best bosses of his and any generation, had no answer.

Amongst the glow of a stunning collective showing, there were some simply huge individual performances. Aaron Wan - Bissaka was colossal as he left Raheem Sterling battered and bruised for the third time this season. Wan - Bissaka forced one of the best players in Europe to the fringes, hounded him into submission and pocketed him throughout.  Sterling never had a sniff and its now the third time that AWB has got the measure of his illustrious opponent this season. Now that he's made sterling useless, does Wan - Bissaka use Bitcoin instead? (we had to get that gag in).

Had things worked out differently, Maguire could have been lining up in Blue but instead the United captain showed his summer suitors exactly what they could have had. In the wave of a Manchester City onslaught, Maguire was the epitome of his side's guts, spirit and strength of mind. He cleared everything, won tackles, organised and rendered one of the best strikers in the world in Sergio Aguero anonymous. He was an injury doubt (or was it mind games) but you'd never know it. He seemed telepathic at times, drawn to every ball as if by magic. As United defended for their lives, Maguire was magnificent, colossal, heroic and a rock. In midfield, the Fred juggernaut showed no signs of stopping. In the absence of Kevin de Bruyne, Fred shut down the player tasked with pulling the strings in lieu of the talented Belgian - Rodri -  and did so magnificently. A bundle of energy, he was very harshly booked but never stopped running.
In Shaw and Matic, there were two men enjoying a new lease of life under Solskjaer. The latter majestically held things together and the former - stationed again on the left of a back three - rendered Bernardo Silva and Phil Foden ineffective in tandem with another Manchester-born lad in Brandon Williams. Matic and Shaw, more than anyone, have epitomised the renaissance of Solskjaer's United.  Both have gone from injury prone and out of form to indispensable and undroppable in a matter of weeks. To a man and from front to back, I was so proud of every single one of those players - they showed guts, mental strength, fortitude, courage and character in a team effort in every sense of the word. United rose to the big occasion once again.

Up front, Anthony Martial became only the second player to score home and away against City in the same league season, and the first since a certain Cristiano Ronaldo in the 2009-10 campaign and Bruno Fernandes set him up with a delicious chip in yet another totemic showing on his derby debut. Martial, too, has had his critics but he's starting to believe he's part of United's present and not the past. Despite his occasional languid approach, Martial was "in the mood" from the off, leading the line superbly and exploiting the ageing Fernandinho and hapless Nicolas Otamendi in a brilliant clinic of centre-forward play - he even popped up in defence during the second half!

United may still be some way short from the glory days of old but victories such as this one sustain hope and belief, and the atmosphere inside Old Trafford was reminiscent of the halycon days of yesteryear. So, too, was the manor in which Solskjaer's side manfully held their advantage and then sealed the win in "Fergie time" (or "Solskjaer seconds?)

United have looked so far from contention for much of the season but have catapulted ourselves back into the thick of the fight for the top four and the riches that would bring, not to mention we're still fighting for two trophies. Credit must go to Solskjaer who has helped to fashion this ten game unbeaten run. This was surely the most satisfying day of the season - and arguably even of Solskjaer's tenure at the club.