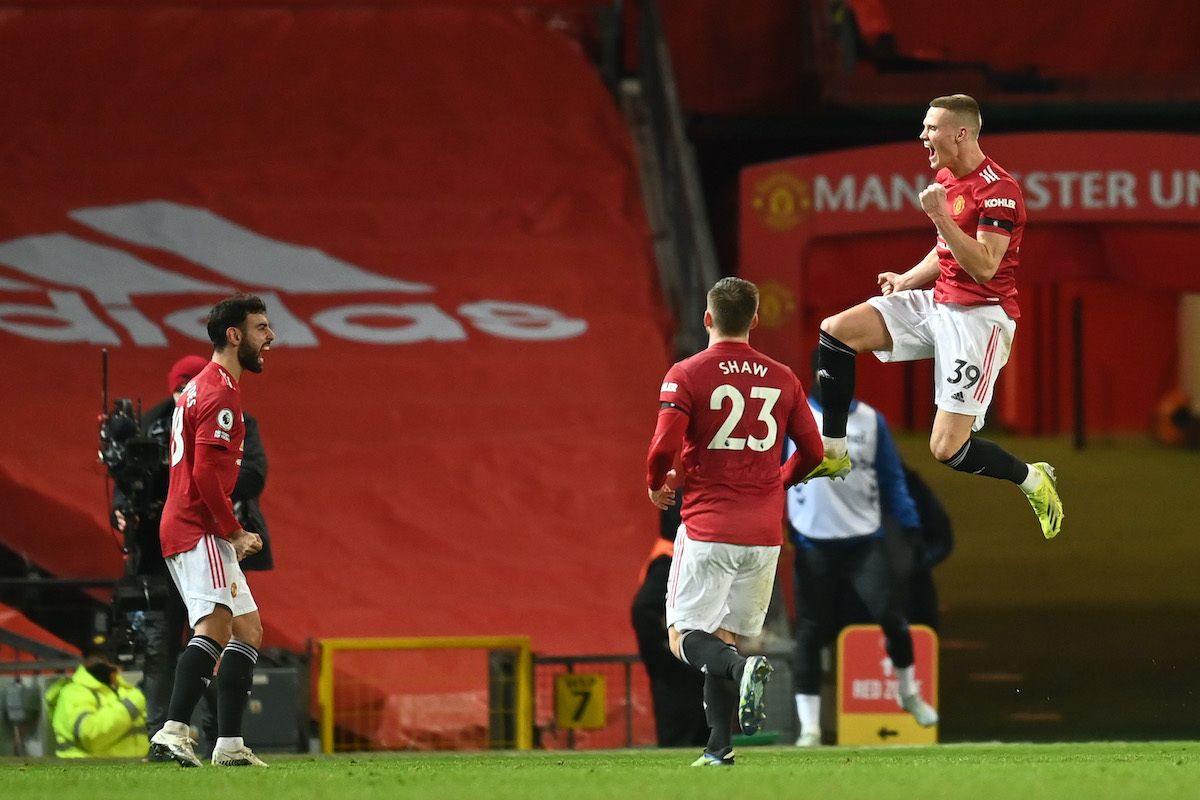 United missed the opportunity to pull level on points with Manchester City as Dominic Calvert - Lewin. equalised with the final kick of a six goal thriller at Old Trafford.

Ole Gunnar Solskjaer's side had looked on course for a comfortable victory after Edinson Cavani and a stunning Bruno Fernandes strike had put us into a 2-0 lead by the break.
Even when the obdurate Toffees had equalised with two goals in as many minutes through Abdoulaye Doucoure and James Rodriguez, Scott McTominay's thumping header looked to put the Reds again on course for a vital victory.

But we had reckoned without our chronic inability to defend set-pieces as Michael Keane flicked on a Lucas Digne set piece and Calvert - Lewin gut wrenchingly bundled the ball in from close range in the fifth minute of stoppage time.

The painful dropped points left the Reds two points behind the leaders ahead of the heavyweight clash between Liverpool and Pep Guardiola's side at Anfield later today.
On the 63rd anniversary of the Munich air crash - only the fourth time we've played on the date itself - there was one change from the side that put nine past Southampton in midweek as Paul Pogba came in for Fred, fresh from his stint as an auxiliary left-back.

After Harry Maguire and his Toffees counterpart Digne had laid wreaths in the centre circle in memory of the tragic events on 1958, the visitors started well as the Reds struggled to hit their stride in the way they had against Saints.

Given the poignancy of the day as we remembered the darkest hour in the history of the club, it was perhaps fitting that one of the four Academy graduates in the line-up should be involved in the opener.
Fernandes found Marcus Rashford and his cross evaded ex-Red Keane to pick out Cavani and the predatory Uruguayan showed his prowess in front of goal with a thumping header beyond stand-in stopper Robin Olsen.

Pogba would be forced off soon afterwards with a thigh injury and was replaced by Fred to revert to the XI used in midweek.
The United substitute almost made an immediate impact as he fizzed a shot wide from distance before his compatriot Richarlison went close with a curler at the other end having seized on Victor Lindelof's errant clearance.

Then came a moment that belonged in the pantheon of Old Trafford's greatest. It is almost criminal that Bruno Fernandes is strutting his stuff with no fans present, as this wonderful player deserves for his exploits to be recognised. 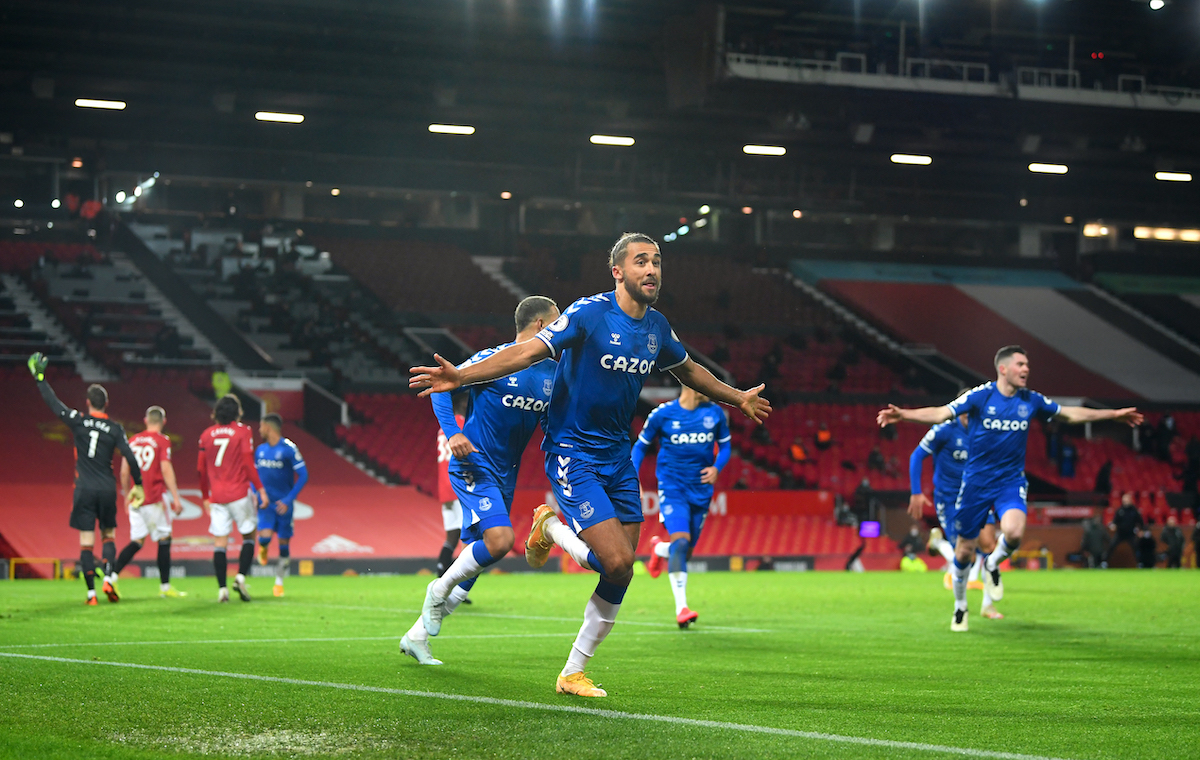 It was a filthy, Cantona-esque finish reminiscent of Le Roi's chip against Sunderland in 1996, with the non-celebration to
match. The Portuguese magnifico took his time, shaping to shoot before he audaciously dummied the ball to Aaron Wan - Bissaka whom returned the ball to Fernandes before he crashed a magnificent dipping effort beyond the reach of the startled Olsen - possibly the first player ever to effectively set up himself.

With United 2-0 and comfortable, it should have laid the platform to a comfortable and routine second half. Olsen saved superbly from Luke Shaw on 47 minutes, but in the blink of an eye the contest was turned on its head.

Olsen's intervention spurred Carlo Ancelotti's men into life as Tom Davies found Calvert - Lewin whose cross was merely palmed out to the onrushing Doucoure and he slid home from close range.
United's penchant for doing things the hard way had reared its head again and the rejuvenated visitors stunned the Reds with an equaliser out of nothing on 52 minutes. Doucoure this time turned provider as he linked up with James Rodriguez and teed up the Colombian for a low, drilled finish with a 20-yarder beyond De Gea to make it 2-2.

The Reds shrugged off the shock of the quickfire double and surged back into life as Rashford was released by Cavani, only to be denied by a smart save from the sprawling Olsen.
A superbly see-sawing contest took another twist as United re-established their advantage with 20 minutes to play. Shaw, having earlier come close to a rare goal, continued his rich vein of form as he picked out McTominay with a magnificent cross and the Scot, himself a man in good nick, glanced home a header beyond Olsen whom probably should have done better.

Fernandes flashed a shot wide and Rashford also went close but Everton continued to threaten and almost levelled again through Calvert - Lewin as he fired narrowly off target after another teasing delivery from the impressive Digne.

You felt we always needed a fourth goal to make sure of victory, and Fernandes almost provided it as he set up a repeat of his match-winning FA Cup heroics with a free-kick. This time, though, he was unable to keep his effort down as the set-piece cleared the bar with ten minutes to go.

It was a moment that agonisingly came back to haunt us as late substitute Axel Tuanzebe scythed down Richarlison to concede a free-kick. United failed to clear and Calvert - Lewin pounced from close range to pilfer a point - three shots on target and three goals for the visitors clearly highlighting where the Reds went wrong.