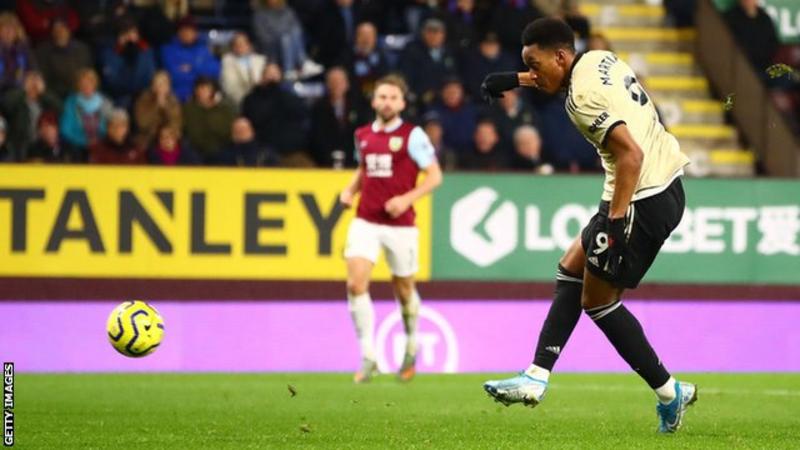 Anthony Martial and Marcus Rashford scored late in each half as United signed off for 2019 with victory at Turf Moor.
Ole Gunnar Solskjaer's Reds moved to within a point of the top four after back to back wins over Christmas and ended a 14-game run without a clean sheet. United have now taken 13 points from our last six ties and what, on paper at least, looked a difficult proposition, instead presented few problems on a comfortable afternoon for the Reds.

After his brace against Newcastle on Boxing Day, Martial tapped in his tenth of the season from close range a minute before the break. Andreas Pereira had dispossessed Charlie Taylor and picked out the onrushing Frenchman with a superb cross. Rashford then raced clear in stoppage time to put the seal on a deserved result.

Martial had a goal ruled out after he was adjudged to have pushed James Tarkowski in the back, and Jeff Hendrick went close at the other end, as he skewed a shot wide when well placed.
The Frenchman had a shot cleared off the line by Bardsley, who was then involved at the other end as he popped up in the box, only for De Gea to save well low down.

Renowned as one of the trickier away trips in the league, akin to the days of Stoke City, the Clarets gave their visitors a typical blood-and-thunder-welcome with Ashley Barnes involved in an aerial tete-a-tete with namesake Young.

Nick Pope denied Rashford from a set piece, and the in-form 22 year old, in his best ever goalscoring season, went close again on the half hour mark. A viciously dipping shot from distance left Pope grasping at thin air, but the ball tickled the left hand post and bounced to safety.
Martial narrowly failed to turn home a cross from the superb Brandon Williams, but with half-time approaching, the breakthrough duly arrived.

Good work by Pereira saw him improbably nick the ball from Taylor, and the Brazilian then simply slipped in Martial and he showed excellent composure to tuck the ball beyond Pope and put United ahead.

Substitute Jesse Lingard was crowded out before Bardsley's effort, when the former United man stretched every sinew to meet a free-kick, but De Gea was equal to it and managed to tip wide.

Ben Mee and Taylor were booked in quick succession for fouls on the resilient Dan James, and Martial had the chance to put the result beyond doubt on the break. He showed why he can be so frustrating when he checked back under pressure from Pope when he had options for a pass or could have taken a shot on.

The Reds have let leads slip late on too many times this season, especially away from home, but there was to be no repeat this time.

After a couple of heart-in-mouth moments as the Clarets mounted an aerial bombardment at the death, the Reds wrapped up victory with a classic, trademark counter attack clincher. Young released James and he in turn found Rashford who burst clear and slid the ball home to send United into 2020 well placed in the table.