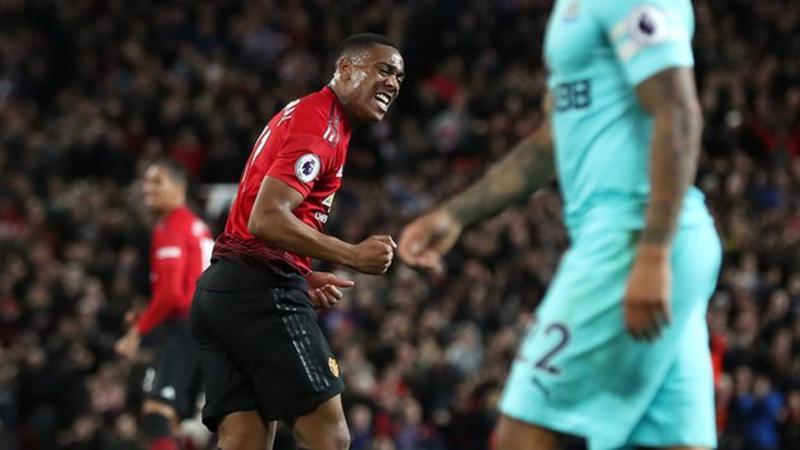 If ever there was a game to epitomise the infuriating Jekyll-and-Hyde nature of this consistently inconsistent United side then the win over Newcastle was it.
The scenes that followed Alexis Sanchez late, late winner at the death were reminscent of a bygone era tempered both by the strength of opposition and for the fact that United, not for the first time, only turned up at the party when all seemed lost and the chips were down. 0-2 down, the team threw off their inhibitions, played with freedom and climbed off the canvas in magnificent fashion, a fashion akin to the dramatic victories we witnessed at Selhurst Park and, most memorably of all, the recovery from an identical position at the Etihad to stop City's title party. The players have justifiably so come in for heavy criticism this season in the midst of United's 29-year low, but deserved huge credit here. In a season during which Mourinho has got a lot wrong, here he turned the game as two of his substitutes - Alexis and Juan Mata - turned the game.

A 0-2 comeback to salvage a win or even a point in the Premier League takes some doing, regardless of opponents, status or form. It is becoming United's trademark, but one that provides more questions than answers. The common denominator in United going gung ho under Mourinho is when they are forced to do so. Only then does the handbrake come off.

Why can't we start games in this way instead of only coming to the party in 15, 20, 45 minute spells, and how is it possible for a team to lurch to the inept to the inspired and back again in the space of 90 topsy turvy, rollercoaster minutes? Answers on a postcard. The first half against Newcastle was in keeping with so many of United's recent showings - insipid, lifeless and absolutely dire. The second was a throwback to the great sides of yesteryear as we ripped into the visitors with energy, desire and purpose playing much quicker and more direct. The result aside, it was a reverse of the Jekyll and Hyde showing we saw in the Tottenham game back in August. A microcosm of Mourinho's United - inconsistent not from one game to the next but from one minute to the next. Old Trafford was a picture of discontent for much of the match, but by the end it was Mourinho's name being sung as we all pulled together and lived up to our name in the final 25 minutes. We are United.

It would churlish to pretend that this club's plethora of problems, the dark cloud hanging like an inescapable spectre over the shadow of the stadium were swept away on the solitary flick of an Alexis header that he nodded beyond Dubravka and in. But it was a rare bright moment, a flicker of light and a euphoric moment to savour in a darkly depressing season. It's amazing how one goal can change the mood so quickly but the fact remains - this is likely to only be a stay of execution for Mourinho and the club is still embroiled in the thick of continued unrest both in the dressing room and high up in the corridors of power. One last gasp win against a struggling, winless side may have felt mighty good, but it was merely papering over the multitude of cracks. With away trips to Chelsea and Manchester City looming over the turn of the month - plus a double header with Juventus - things are set to get a whole lot harder. But for now, we go in the international break on the back of a vintage United comeback. Get in!

Posted by United Faithful at 15:56