Manchester United won 2-0 in Granada on Thursday but it was a match certainly not without incident as referee Artur Dias took centre-stage.

If you thought the standard of refereeing in the Premier League was bad, and it is, then the performance of Portuguese official Dias reached new levels of incompetence.
Granada committed more fouls than United but received only two bookings. Nemanja Matic got a yellow card for literally winning a header, Harry Maguire's booking wasn't even a foul and Pogba was cautioned for running forwards as he penalised the Reds for everything but continually turned a blind eye to every elbow, kick, hack, scythe and foul coming from the Granada team. This referee showed so many cards he must have a share in Clinton's.

All game long, the home side were more focused on deliberately trying to harm our players than they were in winning the match. Making it difficult for a superior team is one thing, but overstepping the mark and causing deliberate harm to an opponent quite another. You could be forgiven for thinking this was 1970s Leeds, it was that bad. Yet this official simply allowed it to happen. I was proud of the Reds for keeping a cool head under such extreme provocation but it was yet another example of United getting nothing from an abysmal official. I'm sick of it now. It's true we got a penalty at the end of the game, but, given what had gone before, the referee effectively forced himself to give it. His decision making was so haphazard and card happy that he set a precedent resulting in him awarding the spot-kick after Fernandes was shoved over by Yan Brice.

There's a list as long as my arm of incidents which went unpunished in that game. At the centre of it all was Yangel Herrera - quite how he never even got booked, let alone sent off, I'll never know. Not content with elbowing Scott McTominay off the ball, the City loanee and animal set out to maim Marcus Rashford, despite the fact the United man is clearing playing through injury. Herrera stamped on the United no.10's injured ankle, knowing he was hurt and knowing he would likely cause serious injury. Bruno Fernandes was elbowed in the face (not sure who by) and Dan James scythed down with such force on more than one occasion it was a minor miracle he escaped without serious injury. Domingos Duarte was eventually cautioned for his rough-house approach but how the home side only had two bookings and finished with all eleven players on the pitch is beyond me. The fact Duarte was forced off through injury having slammed James to the ground was a delicious piece of ironic karma.

To add insult to metaphorical injury, United will be without three players for the second leg - Luke Shaw (don't know what he was booked for), Maguire (not even a foul) and McTominay (probably the only booking you could say was justified). Mr Dias couldn't wait to pull our boys up on the tiniest thing but yet that Herrera bloke committed roughly 5,000 fouls and nothing was done about it. It makes me wonder whether that referee was asked to dish out yellow cards to deliberately weaken our squad for the second leg - nothing would surprise me any more. 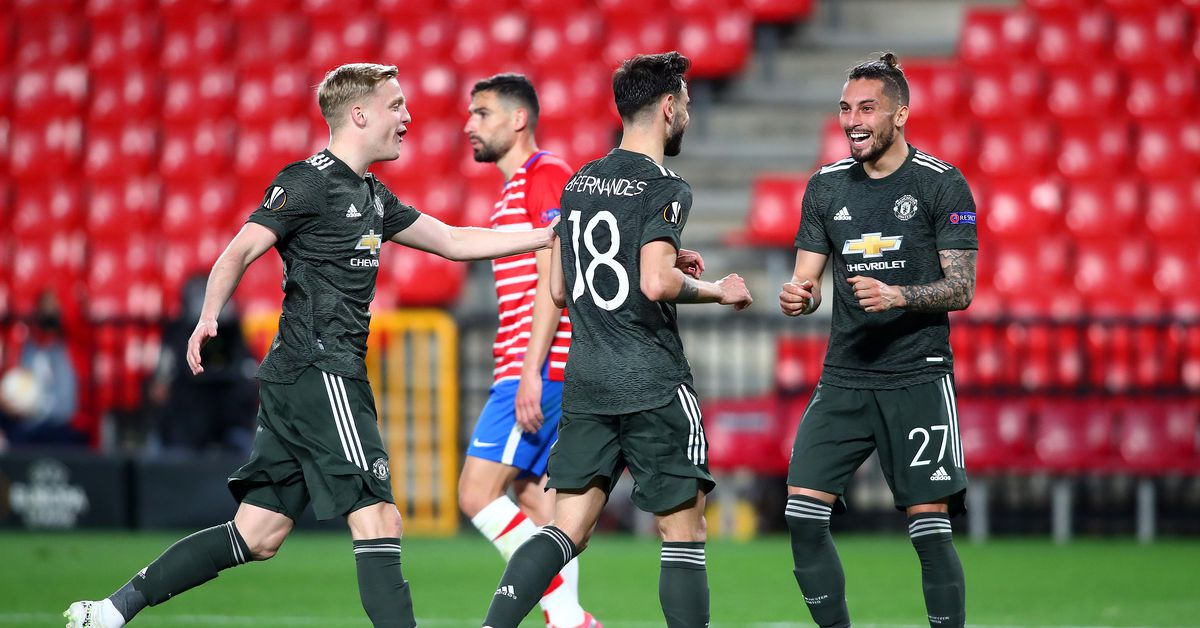 To call Granada's cynical approach "agricultural" would be putting it politely - they were, to be frank, an absolute disgrace to football. Fair play to them for getting this far, but it would have been a travesty if they had got anything from that game. Their one and only tactic was to sit on the 18-yard line and then kick the s**t out of us every time we went forward. They didn't try to play football, they simply kicked anything that moved and were allowed to do so by an incompetent, abysmal, donkey referee - he lost control of the game and failed in his duty of care towards our players. Rarely have I felt this wound up after a win, but the 'performance' of this official has left me feeling very upset and angry. Where do they find these referees?

It's almost as if opponents are setting out to deliberately ruin United. Brighton's Joel Veltman should have been sent off on Sunday after he clattered Fernandes in the build-up to Rashford's goal - to the extent the playmaker could've broken his ankle. At Stamford Bridge last month, Mason Mount stamped on Fred right under the nose of referee Stuart Attwell. And now this debacle. Granada were the dirtiest team I have seen and we can only be thankful that our boys emerged without serious injury - if the home side had three men sent off, I don't think anyone could have really complained. For the second game in a row and for the umpteenth time this season, United should feel hard done by when it comes to getting a raw deal from refs.

You expect better from an official at this level - it's time for United to ask for protection from referees before someone gets seriously hurt.

Posted by United Faithful at 02:10