If a week is a long time in politics, then 48 hours is an absolute eternity in football.

Just when you thought this unique season could not get any stranger, along came a bombshell from above that seemed to threaten the very existence of English football's entire structure.

Sunday started just like any other day but soon descended into chaos with the news 12 clubs - one of which included Manchester United - had agreed to play in a new European Super League. The venture would see these twelve clubs join another eight for two groups of ten followed by a knockout stage. This was more than just a preliminary plan - the details were laid bare for all to see and it was clear how far the planning had got.
To the fury of UEFA, it had all been done behind their backs with eyebrows raised by the fact there would be no promotion or relegation - essentially creating a closed shop for the elite at the top of the game.            No qualification, with places simply handed out to the rich clubs. It came as no surprise when we found out Real Madrid chief Florentino Perez and United's owners the Glazer family had been the main instigators behind the plot. You can bet whenever there's an opportunity to make a quick buck, those Yanks won't be far away. On a sleepy Sunday afternoon, the internet was broken.

The Premier League and FIFA moved quickly to condemn the plans, with ex-Red Gary Neville a particularly vehement critic of the stunning plans. G Nev's impassioned rant saw him call for the clubs involved to be sanctioned, ranging from financial penalties to points deduction and even relegation. The UK government traditionally leave well alone when it comes to self-governed world of professional sport but Labour leader Keir Starmer and Prime Minister Boris Johnson supported the sport's governing bodies in taking action, with Mr Johnson saying he would "do whatever it takes" to bring the plan crashing to a halt.

A European Super League (ESL) website had already been set up and a statement from the new league - released shortly before midnight on Sunday - confirmed the paperwork had been signed and the ESL would commence as soon as possible.

As soon as Europe was awake again, things gathered pace as the ESL contacted FIFA and UEFA presidents Gianni Infantino and Aleksander Ceferin to issue notice of legal proceedings in Europeancourts designed to block any potential sanctions football's two most powerful governing bodies might attempt to bring against the formation of the ESL.
All 12 clubs had be now resigned from the European Club Association (ECA) with City chief Ferran Soriano and ol dick Ed himself leaving their roles at UEFA.

By now, the protest movement had already begun with several players both past and present the first to speak out. Ex-Red Ander Herrera, now of PSG - perhaps surprisingly one of the clubs not to sign up - said: "I cannot remain silent about this, I believe in an improved Champions League but not in the rich stealing what the people created."

With a fault line running through the game, Ceferin - never a man to mince his words - described the creation of the ESL as a "disgraceful" "self serving plan" and one that "spits in the face of football lovers". When a man in such a high ranking position talked of his fellow officials as "snakes" and "liars" it really hit home the sense of ill-feeling this thing had created.

Never before had all of football come together in unison in such large numbers. On Monday night, Elland Road became the focal point as Leeds supporters were joined by fans of other clubs to stage a protest - during which a Liverpool shirt was burned - and an-anti ESL message was displayed trailing in the wake of a plane flown over the stadium. For all the banter, all the tribalism and all the rivalries, the sight of fans joining forces in this way merely served to show the immense power the Beautiful Game has on so many people's lives.

To his credit, Reds manager Jurgen Klopp was the first boss to have his say. The German had previously said he hoped there would never be a Super League and at Elland Road he confirmed his stance on the issue had not changed. Leeds players wore T-shirts saying "Earn it" next to the Champions League logo and "Football is for the fans," leaving the shirts in the opposition dressing room in case they wanted to join the protests.

Monday saw meetings aplenty as a Zoom call between the 14 non-ESL clubs saw a unanimous and vigorous reject of the proposals whilst the league itself announced it was "considering all actions available to prevent this from happening."

With Boris involved, it seemed increasingly likely that the entire idea would collapse as the PM held a meeting with the FA, Premier League and football fan groups, as Johnson later re-affirmed his position in doing "whatever it takes" in the attempts to prevent the breakaway competition. 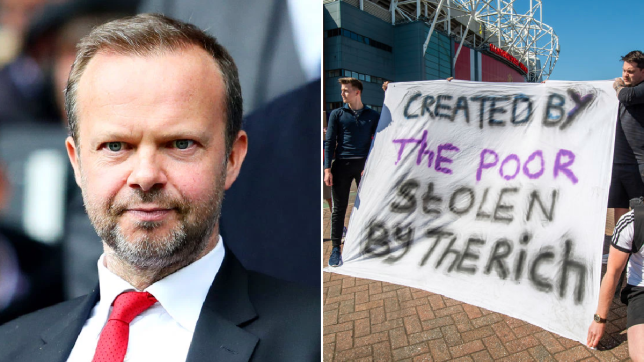 Marcus Rashford joined the fight with a simple but effective message in which he simply tweeted a photo of a banner adorning Old Trafford's Stretford End - in the words of our legendary boss Sir Matt Busby: "Football without fans is nothing." You can always count on our Marcus to have his say - he is a fan like all of us and will always speak from the heart.

Tuesday saw more protests - most pertinently at Stamford Bridge before Chelsea's game with Brighton. Blues legend Petr Cech emerged to plead with the protesting masses as fans gathered at SW6 in their hundreds with flags, chants and smoke bombs as the streets of west London rapidly began to resemble a war zone.

All of football, it seemed, was against it. Vehemently, fundamentally and so, so passionately. The people had manned the barricades and more in defence of the People's Game.
And so, almost as soon as it was announced, so the ESL began to unravel. Imploding. Chelsea pulled out, quickly followed by Manchester City. Woodward announced he was going (I'm still in shock) - surely not an unconnected development. Rumours Andre Agnelli, the Juventus chairman, had fallen on his sword in Italy, were circulating. By the end of the night, all six English sides had withdrawn, tail firmly between legs, with Luke Shaw, Rashford, Bruno Fernandes and captain Harry Maguire leading the United players revolt in confronting the club's powers-that-be to threaten unprecedented action should the club proceed with their ESL intentions

So, as quickly as the spectre of a Super League had appeared, it had receded with even greater haste. The backlash had been unprecedented and simply astonishing at every level - from fans, players, managers, pundits, even the government. Surely this poorly thought out and ill conceived project is where it perhaps should have been all along - dead in the water.

There has been talk of massive sanctions against the six rebel English clubs - United, City, Liverpool, Chelsea, Arsenal and Spurs - and it remains uncertain how the re-integration will take shape. We certainly haven't heard the last of this, but, for now at least, the storm has abated and normal service has been resumed.

Oh and did we tell you Ed Woodward has gone!!

Posted by United Faithful at 02:30