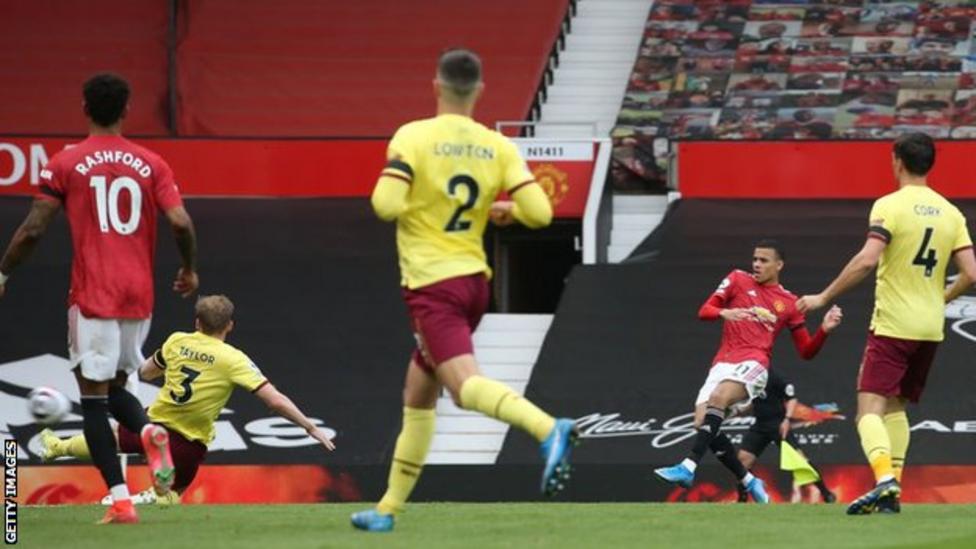 Two late goals from Mason Greenwood and Edinson Cavani fired Manchester United to victory over battling Burnley as the Reds moved to within eight points of league leaders Manchester City.
Greenwood had put Ole Gunnar Solskjaer's ahead three minutes into the second half before James Tarkowski's header threatened to extend the Reds recent home hoodoo against Sean Dyche's Clarets.

But there was to be no repeat of those frustrations as United's pressure eventually told and Greenwood restored the Reds advantage six minutes from time before in-form substitute Cavani hit his third goal in as many games to put the result beyond doubt late on.
The result saw United move on to 66 points - the same as last term's 38-game tally - with six games of this campaign still to spare. It seems a long shot for us to be able to overhaul City from here as Pep Guardiola's team would need to lose half of their remaining games for United to catch them.

Solskjaer made only one change from the victorious XI at the Tottenham Hotspur stadium as Greenwood came in for the benched Cavani and was tasked with leading the line.
United hadn't beaten the Clarets at Old Trafford since 2015 with three draws and a win for the visitors since then, and the attempt to end that curiously wretched run began badly inside the opening minute.

Chris Wood beat the onrushing Dean Henderson to a floated delivery on the edge of the box and headed the ball over the keep and in, only to be denied by the offside flag.
Scott McTominay flashed a shot wide and Paul Pogba was denied by Burnley's stand-in stopper Bailey Peacock - Farrell. Bruno Fernandes also went close with a curler from distance in a bright start from Solskjaer's United.

Marcus Rashford had a header saved on the half hour mark and then, moments later, Pogba had another headed effort but he failed to connect and the chance had gone.

The Reds were dominant but were frequently rendered dormant as Burnley - as is their wont - made life difficult as they defended deep and in numbers and looked to hit United on the counter-attack.
A brilliant long ball from Victor Lindelof - quickly becoming the Swede's trademark - found Rashford and he went down under a challenge from the onrushing Peacock - Farrell but referee Jon Moss, correctly on this occasion, waved away the half-hearted penalty appeals.

Rashford's cross narrowly evaded the stretching Greenwood before Wood went close at the other end as he flashed narrowly wide on the half-volley shortly before the interval.
It was a half so in keeping with United's
recent struggles at home to Burnley as despite having most of the possession and several chance, a combination of stout defence and profligate finishing saw a scoreless opening 45.

But, within three minutes of the restart, United were ahead. Rashford, in his best performance for weeks, skipped beyond Matthew Lowton and burst into the box where he cut the ball back for Fernandes. The Portuguese playmaker took his marker out of the game as he dummied the ball into the path of Greenwood and the dead-eye 19-year-old continued his fine recent form with an excellent low finish. But our lead did not last long as Burnley restored parity within two minutes when Tarkowski outjumped Aaron Wan - Bissaka and thumped home a header from Ashley Westwood's corner.
It seemed as though the curse of the Clarets had struck again as having been unexpectedly pegged back,  the Reds huffed and puffed and looked to be running out of ideas. It wasn't until the 70th minute when United began to re-exert their authority through Fernandes, as his header was steered to safety by Peacock - Farrell. Pogba fizzed an effort wide and Greenwood fired off target before United finally, and this time decisively, broke Burnley's stubborn resistance for a second time.

Greenwood put the hosts back in front with six minutes to play as he fired in a left-footed effort that took a deflection beyond Peacock - Farrell on its way in.
Wood had a shot blocked by Lindelof but United came on strong in the closing stages as Fernandes linked with substitute Donny van de Beek and he squared to fellow sub Cavani to tap in and complete a hard fought victory.

Posted by United Faithful at 15:14