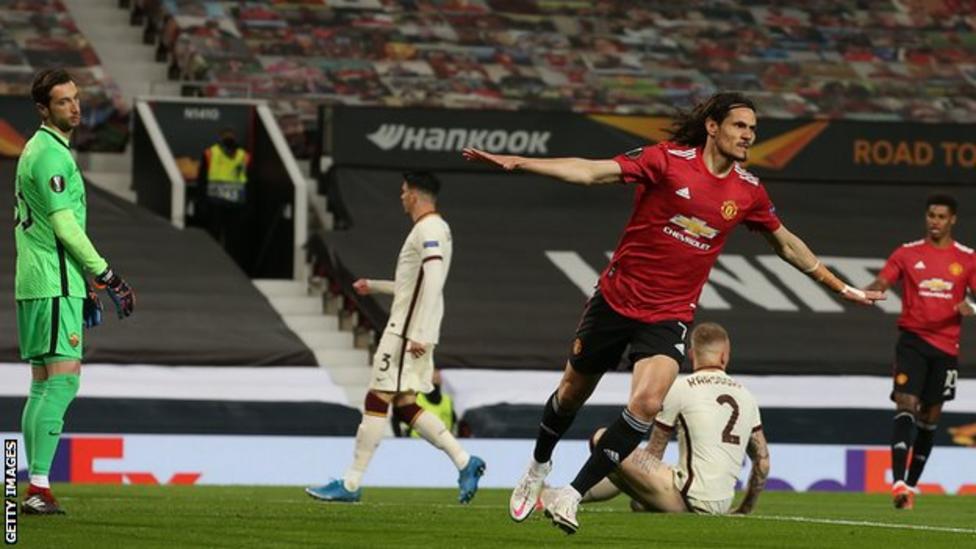 Edinson Cavani and Bruno Fernandes scored twice in a stunning second half salvo as United eviscerated Roma to move to within touching distance of the Europa League final.
Fernandes had put the Reds ahead inside ten minutes only for the Serie A side to turn the tie on its head Lorenzo Pellegrini and a familiar face in Edin Dzeko.
But United rallied in the second half and turned on the style as Cavani equalised and then restored our lead with a close range finish. Fernandes grabbed the fourth from the spot before Paul Pogba headed in for a 5-2 and substitute Mason Greenwood slammed in the sixth late on to complete the rout and surely put the two-legged semi final beyond any lingering doubt.

For Solskjaer, the result will banish the demons of his previous semi final failings with the Norwegian set to take his United side into a showpiece final at the fifth time of asking.
There were three changes from the Elland Road stalemate as David de Gea, Pogba and Cavani usurped Dean Henderson, Dan James and Mason Greenwood in a strong XI. For Roma, there were two familiar faces as Chris Smalling and Henrikh Mkhitaryan - once of this parish - made their first returns to Old Trafford.

Restoring his big hitters to the side would have the desired effect as United went ahead after only eight  minutes with a goal of breathtaking quality. Luke Shaw found Pogba, the Frenchman spun his marker, skipped past another Roma player and fed Cavani. The Uruguayan in turn found Fernandes and he found an exquisite finish to match the build up as he clipped the ball over Pau Lopez to put us ahead.
But United's lead did not last long as parity was restored only four minutes further on. Pogba could count himself unfortunate as, in sliding to cut out a Rick Karsdorp cross, he inadvertently handled the ball after appearing to slip on the wet Old Trafford turf.

After consulting with his assistant, referee Carlos del Cerro Grande awarded the penalty - harsh but correct by the letter of the law - and Pellegrini smashed home the spot-kick to give Paulo Fonseca's side a crucial away goal.

Fernandes flashed a shot wide and Lopez saved superbly from Pogba when he tipped a piledriver wide, injuring himself in the process. Ex-Villa man Jordan Veretout had been forced off injured after only three minutes and so the Serie A side had to make their second change with half an hour played as back up keeper Mirante entered the fray.

Despite their sudden injury-hit side, the visitors only continued to exert their authority and completed the turnaround on 33 minutes. United old boy Mkhitaryan - influential when the Reds won this tournament in 2017 - was involved in the move as his defence splitting ball found Pellegrini. The penalty scorer turned provider as he squared for Dzeko and the ex-City man turned the ball home despite the attentions of Luke Shaw and Harry Maguire.

United should have gone in at half-time level when Roger Ibanez miscued a clearance to Cavani and the striker found himself in on goal. You would have bet your house on the net to bulge, but somehow the veteran saw his saved by the keeper and Smalling blocked Cavani's follow up to send the Italians in at the interval with two away goals and a 1-2 advantage.

But you can never keep a good man down for long and Cavani redeemed himself with a clinically-struck leveller within three minutes of the restart.
Fed by a lovely Fernandes ball, the 34-year-old with the uncertain future rifled home high into the Stretford End net to equalise in an unexpectedly wide open game.
Cavani was in the thick of the action and went close again shortly after the goal as he lifted the ball over the top on 53 minutes after a surging run from Shaw.

Semi finals are often evenly fought, closely contested chess matches but this was an exception as the action continued to flow in an increasingly see-sawing contest.
That man Cavani was magnificent throughout and capped a scintillating performance with another goal shortly beyond the hour mark. Aaron Wan - Bissaka's shot was parried by Mirante into the path of the dead-eye Uruguayan and he snaffled up the rebound for his 12th of the season and fifth in as many games. 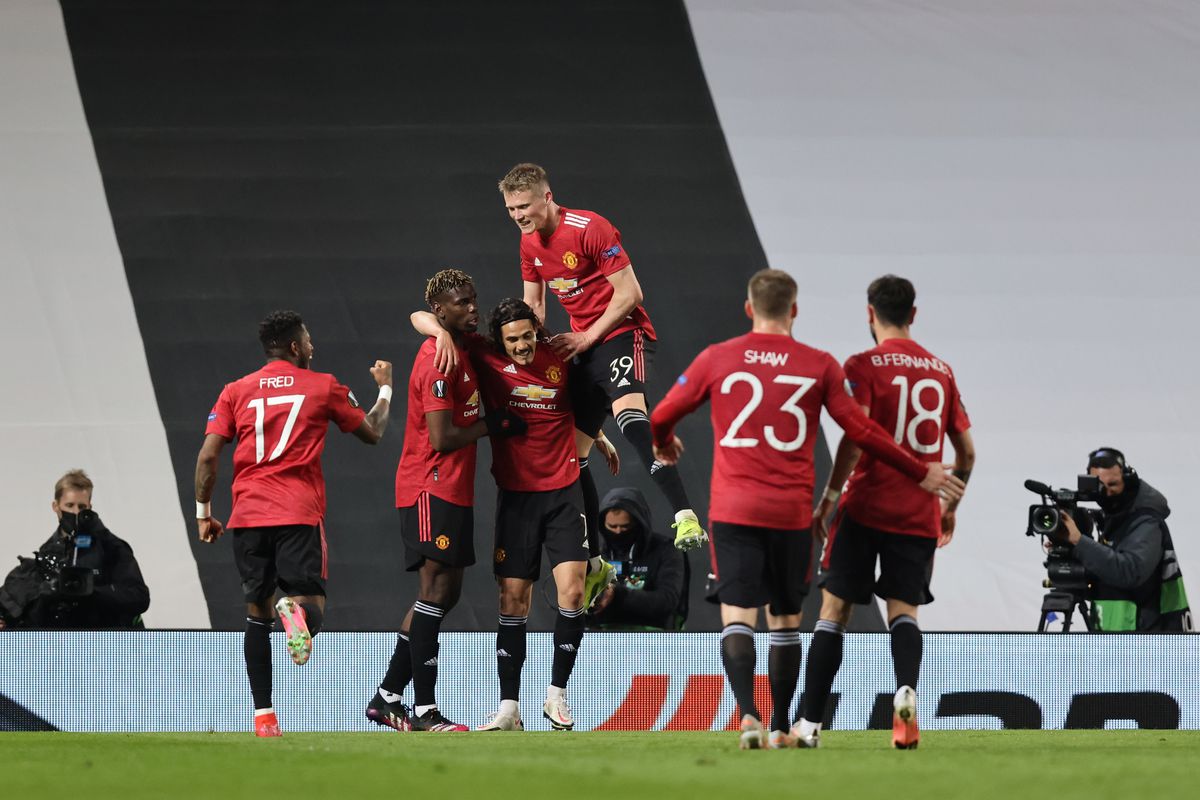 The Reds had hit an unstoppable stride and put distance between themselves and the faltering Italians when Smalling scythed down Cavani and, aided and abetted by VAR, a penalty was awarded.
Fernandes made no mistake from 12 yards as the second spot-kick of the match was duly despatched with aplomb as Roma began to wilt under the sheer force of United's onslaught.

Old Trafford would have been rocking to its foundation on a big European night under normal circumstances as the Reds turned the screw. Not content to merely sit on a two-goal advantage, United moved further clear when the excellent Pogba turned home a header having been picked out by a delicious ball from Fernandes - the Portuguese playmaker's second assist of the game.

Greenwood had come on for Rashford and continued his rich vein of scoring form when he latched on to Cavani's stunning through pass to thump in the final goal and hit double figures for the season.

Posted by United Faithful at 16:20