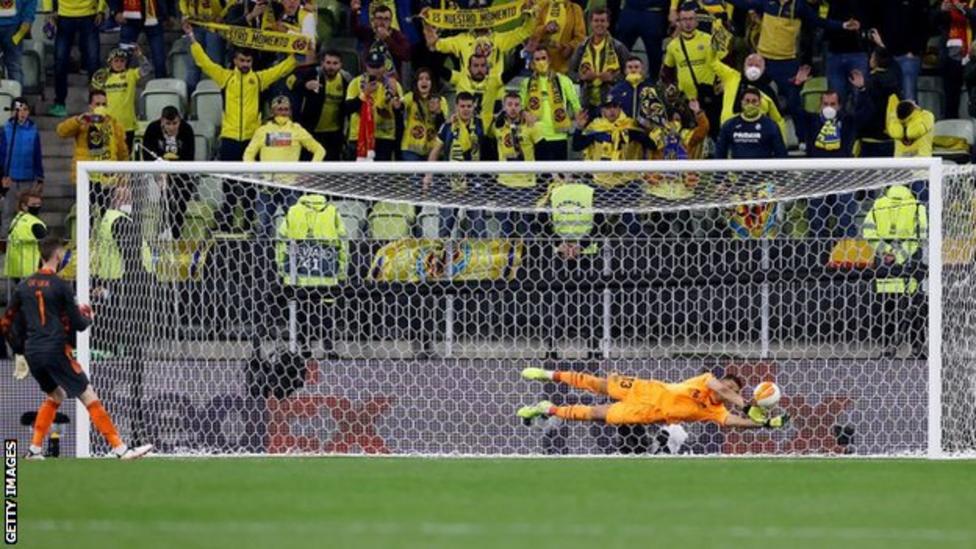 Manchester United suffered Europa League final agony from the spot at the hands of Unai Emery's Villarreal.
The ex-Arsenal manager pulled off a fourth success in the competition as his unfancied Yellow Submarines tucked away all eleven of their penalties before Geronimo Rulli saved the 22nd effort from opposite number David de Gea to deny United a first piece of silverware under Ole Gunnar Solskjaer.

Edinson Cavani had earlier cancelled out Gerard Moreno's 30th goal of the campaign to restore parity and that was the way it stayed throughout extra-time to ultimately force the lottery of penalties.
Typically under Emery, Villarreal dug in as the Reds struggled with energy and invention late on as the Gdansk showpiece became a tense and tired affair as the tie drifted into extra-time and then the nail biting drama of the shootout.

In the Reds 61st and final game of a marathon season, Solskjaer restored his key men having played a shadow side at Molineux in the last match of the league season. Mason Greenwood and Marcus Rashford were paired together with Eric Bailly at centre-back alongside Victor Lindelof in the enforced absence of captain Harry Maguire. Paul Pogba played in a deeper midfield role with Fred - perhaps surprisingly - named on the bench.

Scott McTominay - probably the best player on the pitch - flashed a shot wide inside the opening ten minutes when he should have done better with a trademark strike from distance.
Villarreal's Spurs loanee Juan Foyth then required treatment for a bloodied nose after an accidental collision with Pogba.

Villarreal defended deep and in numbers but United dominated possession without managing to get in behind the Spaniards organised and well drilled low block.
Luke Shaw's cross-come-shot flashed across goal with no one on the end of it to take it beyond Rulli, before United target Pau Torres headed over at the other end in a rare opening for the La Liga side.

Cavani mis-controlled a pass from Greenwood on 23 minutes but United's threat fizzled out and we fell behind on the half hour mark in familiar fashion. United's Achilles heel has been set pieces and it was a case of deja vu here. In fairness to Dani Parejo, it was a well-struck set piece, whipped in with height and pace to drop between our two centre-backs into the path of Moreno, and he stuck out a foot to knock in the ball in beyond the stranded De Gea.

Rulli - supposedly suspect - was protected and marshalled by a wall of yellow as Villarreal swamped and stifled United are every turn.
Greenwood made an encouraging darting run in the closing stages of the half but - as if magnetically - it was a yellow shirt which was able to intercept the ball and shepherd it back to the keeper.

Greenwood was scythed down on 52 minutes but the French referee Clement Turpin, appalling all game, waved away vociferous protests after the obligatory VAR check.
However, the video technology was soon to work in United's favour with the equaliser three minutes later. McTominay's driving run won a corner, Shaw's effort was half cleared and Cavani pounced to turn the ball home from Rashford's deflected shot.

A longer VAR check saw hearts in mouth but there was nothing wrong with the goal as the ref confirmed Cavani had been onside to finally break Villarreal's rearguard.
Rashford missed a sitter on 70 minutes when clean through but he will have been relieved to see the offside flag raised after an infringement from Bruno Fernandes in the build up.

Cavani headed Shaw's cross against Torres and another penalty appeal was turned down when the same player seemed to handle a Greenwood ball in but again there was nothing doing.

With legs beginning to tire, Emery finally threw off the shackles and introduced all five of his substitutes to breathe new life into his sinking Yellow Submarines.
22 years on to the day since his famous exploits in Barcelona, neither Solskjaer nor his side were able to conjure up another magical winning moment.

With United tiring and Villarreal newly freshened through their bench, it took Ole until the 100th minute to make a change as Fred came on for Greenwood to tighten the midfield and give his side energy.
Parejo fired wide and Moreno went close with a header but, in truth, a shootout long seemed inevitable with neither side having the willpower - or the fitness - to launch one last push forward.

Juan Mata and Alex Telles both came on seconds from the end for the penalties and both, to their credit, dispatched their spot-kicks with ease. Rashford, Cavani and Fernandes were also amongst United's five penalty takers but the extraordinary shootout came all the way down to the fate of the respective keepers. Rulli converted, De Gea failed to do so and United's hopes of European glory were agonisingly over for another season.

Posted by United Faithful at 01:05