Power to the people after extraordinary day at Old Trafford

Today was supposed to be the biggest match of the season but instead it ended with Manchester United and its fans hitting the headlines for an entirely different reason.

Fans initially gathered outside the ground with green and gold scarves - the colour of United's first kit from their Newton Heath days - with flares let off and chants in protest of the Glazers. A large protest had been planned and indeed expected before the heavyweight clash with the men from Merseyside - but no one could have predicted what would follow. 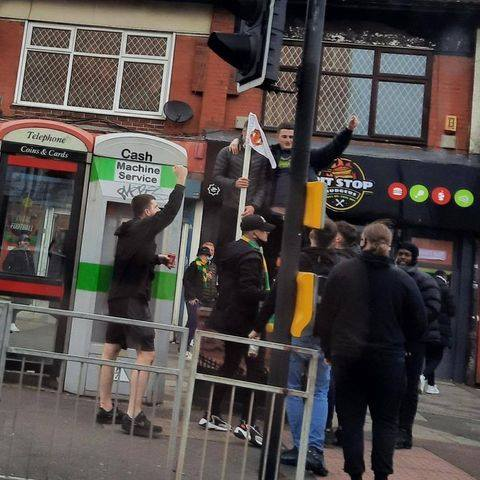 Things began peacefully enough but quickly began to escalate as a 200-strong throng smashed through security defences to raid the pitch whilst there were reports of clashes with police on the stadium forecourt. Smoke bombs and more flares were let off with barriers and bottles thrown - sadly you always get a few idiots - as more fans gathered outside the Lowry Hotel where the players were staying in preparation for the hotly anticipated fixture.

Eventually, the game was postponed on safety grounds shortly after 5.30pm - just over an hour after the scheduled kick-off. Both sides had submitted their team line up but remained stranded at the hotel as the anti-Glazer movement took hold. My personal highlight was the sight of one of United's corner flags disappearing down Sir Matt Busby Way en route to its perch on top of a roof midway down the Warwick Road!

Let that sink in for a moment. Manchester United's fans got one of the biggest fixtures in world football called off because of our hatred for the owners. What a statement. On a seismic day for fan power, the banner held aloft at Carrington a few weeks ago had it right: We decide when you play. It cannot be ignored any more. Power to the people.

United were on the stock market before the Glazers took over in 2005, but we were debt free until the American owners arrived and landed the club with an enormous deficit in order to complete their eye-watering £790m takeover. They should have used their own money but instead borrowed it from the club.
The debt currently sits at £455.5m as the Glazers take 200m dividends out each year having stolen 1bn over the past 16 years. By contrast, City's owners have put 1bn in since they arrived in 2010.

They've treated the club as a cash cow, taking money out the profits while the interest repayment on the debt they forced on our club has been steadily growing all the time. A lack of investment into the team and the sight of a crumbling, ageing Old Trafford edifice is proof - if it were needed - of the sorry state of affairs. 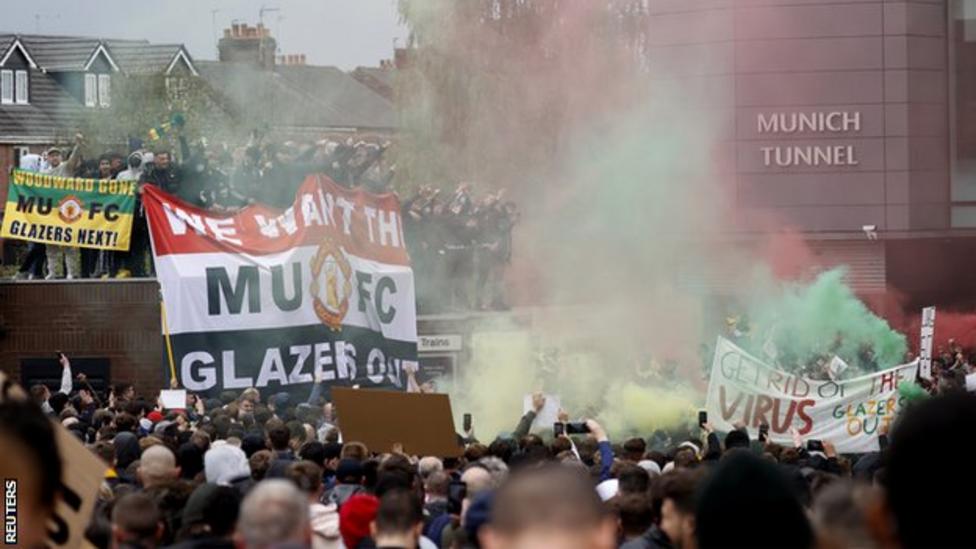 The lazy narrative has been United are only protesting now because there has been a relative dearth of success. But this is about more than simply silverware. This is about greed, money and betraying the most loyal and passionate fanbase in the world. These men have dragged United through the gutter in the name of a few extra pound signs. We protested in 2010 - shortly after United had won three successive titles and won the Champions League. The green and gold was out in force. There have been protests and anger for sixteen years, but the anti-hierarchy tensions have only strengthened with the grubby mitts of the Glazers the driving force behind the ill-fated and short lived European Super League. Enough is enough. Whilst the inception of the ESL may have come as a surprise to everyone else - for us, it really wasn't a shock at all. For us, it merely underlines the view that the owners of the greatest football club in the world - our club - only care about money and they have no affinity or affection for the world-famous 149-year old institution they are residing over.

The sentiment never diminished - even as United surged to a final flourish with Sir Alex Ferguson's last great side. There has been consistent and increasingly vocal disenchantment with the Glazer stewardship with every passing year, not just because a relatively fallow era only exacerbated the failings, but in the shape of the tens of millions wittered out the coffers either directly into their pockets or because of the way they run this club. A protest of this size and of this power only seemed a matter of time. The ESL debacle forced our hands and proved the tipping point.

What a time to do it - on the day of the Liverpool game, with the cameras poised and the eyes of the world on Old Trafford. No one will be talking of anything else. Sadly it's unlikely to make the smallest iota of difference - that will likely only happen when their pockets are started to get hit. But I'm not criticising anyone for making their voices heard, for taking action and standing up for what you believe in. I am proud of every single one of those fans in that protest today - we've proved again what a bloody amazing set of supporters we are. I'd have been there myself if I'd been able to. We don't yet know what the repercussions will be - if any - but I'll happily take anything the authorities can throw at us if it helps spark change.

We can only hope this is the beginning of the end for the poisonous, parasitic, toxic and cancerous leeches in the boardroom. Somehow I doubt it but surely we cannot be ignored.
This is only the beginning of the biggest fight Manchester United's fans - us - have faced in centuries.
#Glazersout

Posted by United Faithful at 15:21