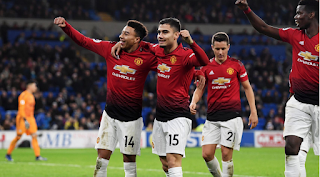 Ole Gunnar Solskjaer faces the most difficult examination of his temporary Old Trafford tenure so far as he takes in-form United to Wembley.
Lying in wait, its Tottenham Hotspur, who looked in contention for the title until a shock 3-1 home defeat to Wolves in their last league game at the national stadium four days after Christmas. That left Spurs in third place but six points adrift of the leaders Liverpool. Despite not spending in the summer and a delayed move to the new ground, Mauricio Pochettino - widely tipped to become the new, long-term choice at United  - has overseen another impressive campaign for the capital club.

Sunday's encounter is Solskjaer’s first duel with any of the league’s top four clubs during his short stint as caretaker manager, but the Norwegian has made a fine start by winning all five of his matches so far. Should he extend that run this weekend, he would become the first United boss to win away at Tottenham Hotspur since Sir Alex Ferguson in March 2012 (Wembley was classed as a neutral venue for last year’s semi-final).
United's first home defeat of the season was inflicted by Spurs when the teams last met in late August, due to Harry Kane’s guided header and a double from Lucas Moura, in what was Jose Mourinho's heaviest home loss as a manager.
However, the Reds were triumphant during the most recent clash between the clubs at the national stadium, coming from behind to win 2-1 in last season’s FA Cup semi-finals.

Sunday's encounter is Solskjaer’s first duel with any of the league’s top four clubs during his short stint as caretaker manager, but the Norwegian has made a fine start by winning all five of his matches so far. Should he extend that run this weekend, he would become the first United boss to win away at Tottenham Hotspur since Sir Alex Ferguson in March 2012 (Wembley was classed as a neutral venue for last year’s semi-final).
Paul Pogba has been declared fit by the caretaker boss, but Marcos Rojo is injured again and Fred is currently on paternity leave as his partner prepares to give birth.
Chris Smalling is working towards full fitness and Victor Lindelof is set to return having been rested for the FA Cup match against Reading.
For Spurs, Eric Dier (appendicitis) and Victor Wanyama (knee) are expected to miss out again this weekend, while Jan Vertonghen and Mousa Dembele have overcome recent complaints to return to training. Impressive and in-form forward Son Heung-min is set to join up with South Korea for the Asian Cup after this fixture.

One of these two managers definitely wants to be the next permanent Manchester United boss, the other is saying nothing.
There's no question that when United appointed Solskjaer they had chosen their moment carefully: four supremely winnable games lay ahead, and the Reds
have duly won them.
But Solskjaer has done more than just win - it's the way United have played and the sight of a couple of youngsters being given their chance. Solskjaer can really do no more.
Mauricio Pochettino's credentials are beyond question. Spurs are certainly London's top side just now, and have achieved that without spending in the summer and without a working stadium to call their own.
Chairman Daniel Levy will understand that, if they are to keep the popular Argentine, then both the new stadium and Levy's wallet had better be open soon.


Pochettino’s men have been in fine fettle for large chunks of the season, with Watford and Wolves being the only two Premier League sides outside the top five to take any points from them. Spurs have won 15 of their last 18 matches in all competitions, and have scored 23 goals in the six most recent fixtures, including the thumping wins over Everton (6-2), Bournemouth (5-0) and Tranmere (7-0). Harry Kane is of course their leading marksman with 20 goals to date but five of his team-mates have also netted more than five goals each this season - Son, Moura, Dele Alli, Christian Eriksen and Eric Lamela - to prove their potency in attack. All that said, four teams have beaten the Lilywhites at Wembley this season: Liverpool, Barcelona, Manchester City and Wolves.
Solskjaer said that he intends to continue with the attacking approach we've seen so far despite the step up in class.
"You always adapt to any opposition we play, we know we're not going to have as much as the ball as we have done, you know all the best sides in the league and of course we have to be aware of their strengths.`
"But I've been brought up in a way that we need to attack teams. I think that's our strength as well, going forward and attacking, as a team when you look at us now the way we've played.
" We're not going to get as many chances to attack against these [Spurs] as we've had before, not as much of the ball, so we've got to be ready for when we get hold of the ball and play well with it to make sure we use the whole pitch because Wembley is a decent-sized pitch as well.
"You get tested in every single game in the Premier League, no doubt about it. But of course, this is against a top, top side and, of course, if we want to get closer to them and get past them, we need a good performance and a good result.”
Form guide: Tottenham W W L W W W Man Utd L W W W W W
Match odds: Tottenham 11/10 Draw 12/5 Man Utd 5/2 (Bet365)
Referee: Mike Dean (Cheshire)
Posted by United Faithful at 03:26